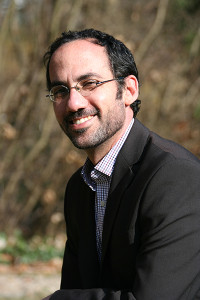 Yair Mintzker is an assistant professor of European history at Princeton University. He usually lives in Princeton, New Jersey, but this year he is a fellow at the Wissenschaftskolleg in Berlin, Germany. He has been a member since 2005.

Fields of interest: political, social, and cultural history of continental Europe in the early modern and modern periods.

I am currently writing a book about the trial and execution of Joseph Süss Oppenheimer, aka “Jew Suss.” Oppenheimer is one of the most iconic figures in the history of anti-Semitism. Originally from the Jewish community in Heidelberg, in 1732 Oppenheimer became the Court Jew (special financial advisor) of the duke of the small German state of Württemberg. When his patron the duke died unexpectedly in March 1737, the Württemberg authorities arrested Oppenheimer, put him on trial, and condemned him to death for unspecified “misdeeds.” On February 4, 1738, Oppenheimer was hanged in front of over 10,000 spectators just outside Stuttgart. He is most often remembered today through the vicious Nazi propaganda movie made about him in 1940.

My first book, The Defortification of the German City, 1689-1866 (Cambridge Univ. Press, 2012), is certainly quite different from my current project. We all know that in premodern times, practically all European cities were fortified places. This was crucial to guaranteeing cities’ commercial, political, and legal privileges. In the book, I used a wealth of primary sources to tell the story of how and why that ceased to be the case: why we came to live in open cities.

Although my projects on defortification and “Jew Suss” are different in many respects, they both stem from my deep conviction that historians should explore more than one answer to the question Why? In Defortification, I did this by showing how defortification cannot be reduced to a single factor like changes in military technology, industrialization, or urban expansion. In my new book, I demonstrate how the history of the trial of “Jew Suss” contains more than one story. Any attempt to reduce it to only one thread would distort our understanding of the trial in a fundamental way.

I would highly recommend a general introduction to Niklas Luhmann’s sociological work such as his “Interaction, Organization, and Society” in The Differentiation of Society (Columbia Univ. Press, 1982). Despite the fact that Luhmann is the most important German sociologist since Max Weber, he is practically unknown among American historians.

Maybe I’ve been reading too many stories about katabasis (journeys to the underworld) recently, but these days I really can’t get this one thought out of my mind. Most of us—those who do not work on very recent history—write about, and often even conduct imaginary conversations with, dead people. Just like Odysseus, Aeneas, or Dante, historians descend into the underworld, come back to the world of the living, and tell a story. It is an incredible exercise to be doing almost every day of your life: at once terrifying, shocking, numbing, humbling, entertaining, and enlightening.

Working on a very disturbing execution in the 18th century, it is absolutely wonderful to be able to go home every evening, forget work for the rest of the day, and spend time with my family. History can be captivating to such a degree that one forgets that the present and future are actually much more important than the past.

Teaching is not a chore that distracts us from what is “really important.” It is our social responsibility to share with others our research, thinking, and writing about the past.