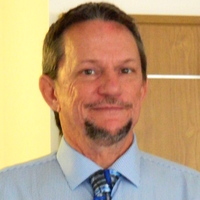 Gary Kieffner is an assistant professor of ethics and governance in the department of history, Fiji National University, Nasinu Campus. He lives in Viti Levu, Fiji Islands, and has been an AHA member since 1999.

I grew up near a small town in the heart of John Birch territory where the primary and secondary schools served as refuge, of sorts, for our very liberal—yet highly respected—teachers. On the first day of school my sixth-grade social studies teacher, Sophia Huff, directed us to open our world history textbook to a certain page in the middle of the book and to handwrite the words “lapis lazuli” on that page under a full-color photo of an ancient Persian artifact. She then had us close the book and proceeded to conduct the kind of first-day orientation rituals that are appropriate for a classroom full of 11-year-olds. It would be several weeks before we would arrive at that page to discover the meaning of this magical, mystical word. Ms. Huff awakened in our young minds an interest in times and places beyond our own small corner of the world.

My academic position requires not only teaching and research but also public consultancy. Having fulfilled my contribution to the Fiji Constitution Commission and development of the new 2013 Constitution (helping to ensure the protection of indigenous land tenure), for my next public service I am offering my services as an expert witness to the courts of Queensland. Unlike Fiji, Australia has no bill of rights and the Australian government has enacted onerous new anti-assembly and anti-association laws (the VLAD Act), which the police forces arbitrarily employ against targeted marginalized groups. It seems that tier-one nations are not immune to the encroachment of totalitarian schemes. I also currently serve as a cultural, historical, and political consultant to journalists writing about American bikers, and to ABATE (American Bikers Aimed Toward Education) of Nebraska’s leadership. As for my history research projects, I am presently revising a book-length manuscript in response to the triple-blind review process at a university press, to publish a monograph on the 140-year social history of motorcycling in the Mexican-US borderlands. This history of an intergenerational material culture is useful for an understanding of larger historical processes of power structural marginalization, desiring-production and accommodation, identity formation, tactical polyvalence and resistance, and the quest for group survival and freedom in the face of adversity and bondage.

While witnessing and enthusiastically participating in the collective acceptance, over the past 15 years, of our new ethical imperative to practice de-colonial/postcolonial methodologies in our research and teaching, a few years ago I learned that the I-Taukei people of the Fiji Islands, perhaps more remarkably than any other First Nation in the entire world, had already largely actualized postcolonial indigenous revival and renaissance. Yet, even today the I-Taukei people must continue to resist and struggle in the face of diverse forms of neocolonialism: economic sanctions imposed by tier-one countries, outdated and ultimately harmful academic projects and schemes issued from the bowels of a British colonial-era university in Laucala, commercial and religious enclaves established for wealth extraction purposes, and sociopolitical and other assaults on indigenous islanders, their governments and cultures. That complex, historically informed, national reality compelled me to accept this position as assistant professor of ethics and governance.

Henry A. Giroux, “Academic Freedom under Fire: The Case for Critical Pedagogy,” College Literature 33, no. 4, The Assault on Higher Education (Fall 2006): 1-42. Highly recommended.

History is the most important discipline for developing a personal capacity to understand the world around us and our place within that world. History tells us where we have come from. It informs us concerning our identities and who we are. It tells us how we arrived here. It explains exactly how present conditions in our environments have come to be and why things are the way they are. It provides an indispensible map orienting us to ourselves, and to our communities.

I have always regarded AHA membership as obligatory for American historians. It is our principal professional guild. Moreover, benefits of membership are very good.

Twelve years ago when I was a first-year doctoral student, I attended the AHA meeting in Chicago. Peter Rollins presented a paper that year, an unusual groundbreaking interpretation of historical masculine gender role constructs, which remarkably affected my historical understanding of the 1950s. Rollins argued that Hugh Hefner initiated a new movement providing a previously unknown, alternative lifestyle for young American men, liberating them from narrowly defined masculine gendered constructs that had previously consigned them largely to marriage and familial responsibilities. Thus, a form of men’s liberation had preceded women’s liberation by several years. At the conclusion of the panel, I complimented Rollins on his presentation; however, only years later—after analyzing the problematic dimensions of Hefner’s legacy and incorporating those into this new perspective—did I realize how much the Rollins thesis had transformed the way in which I view mid-20th-century gendered transformations.

I am passionate about the freeing of US political prisoner number one, Leonard Peltier (via presidential pardon). As one who studies history from a perspective of ethics, I obviously support indigenous rights and the returning of lands to their proper owners. More generally, we should support all kinds of political equality and rights for all people: human rights, civil rights, gendered rights, constitutional rights, the natural rights and quests for freedom that have been principal drivers of historical processes for thousands of years.

The first Fiji elections since 2006 are scheduled for this year, after which I plan to move to the Américas. It is time to return to more traditional forms of historical and scholarly pursuit.