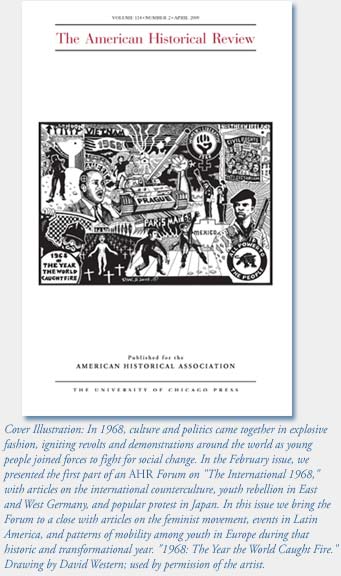 Members should be receiving the April issue of the American Historical Review soon. The issue contains two articles and the second part of our forum on the “International 1968.” As always, a large part of the issue is devoted to book reviews.

The first article, “Mistaken Identities? Olaudah Equiano, Domingos Álvares, and the Methodological Challenges of Studying the African Diaspora,” by James H. Sweet, takes up the issue of identity, whether ethnic or national, in the context of the Atlantic World. Tracing the movements of one man, Domingos Álvares, from his enslavement in West Africa, to Brazil, and finally to Portugal, Sweet argues for a more thoroughly Atlantic approach to understanding African identities. As in the well-known case of Olaudah Equiano, the existing documents describe Domingos in multiple and contradictory ways—as Mina, Cobu, Nangô, and Angola. They defy simple conclusions about Domingos’s identity. But in focusing on the situational, Atlantic contexts that elicited these different nationalities, Sweet demonstrates the calculated ways Domingos presented himself and the different ways he was perceived by others as well. This interplay between self-understandings and interpolated identifications created the complex, overlapping, and sometimes shifting identities that unfolded over the course of his lifetime. Though it might be tempting to celebrate these shifts as instances of cultural malleability, Sweet notes that this shifting identity also entailed violent breaks with the past. The persistent grasping for social inclusion, which was at the very core of the African-Atlantic experience, was a symptom of chronic alienation and instability. It epitomized, in short, the traumatic histories of countless Atlantic Africans.

The topic of identity in a transnational context is also explored in “Expatriation, Expatriates, and Expats: The American Transformation of a Concept,” by Nancy L. Green. She notes that although the terms “expatriate” and “expatriation” have a long and complex history, they have been largely absent from recent studies of citizenship and migration. Most often, indeed, “expatriate” is associated with the writers of the interwar “Lost Generation.” There is, however, a broader understanding of expatriation both as a legal act and as an aspect of changing notions of citizenship. Green pursues several themes. She argues for the importance of incorporating the concept of expatriation into our understanding of the state’s relationship to its citizens, both as a feature of new citizenship studies and in the study of migration. For the state defines itself not only in terms of those it incorporates within its borders but also with regards to citizens who cross the borders to live in other lands. She also insists that the concept of expatriation should be understood as both a legal and a social construct. The “imagined expatriate” has played an important role in the construction of the concept of citizenship. Finally, she proposes a truly historical understanding of expatriation in the last two centuries from welcomed newcomer to traitor to emissary.

In this issue of the AHR we continue our examination of the “International 1968.” February’s issue contained articles about that turbulent year on the international counter-culture, the events in both West and East Germany, and protests in Japan. Part II of the forum presents three essays which take us in very different directions. In “Sons, Daughters, and Patriarchy: Gender and the International 1968,” Sara Evans argues that while few participants or observers noted it at the time, gender was in fact at the heart of the youthful rebellions associated with 1968; for the generational uprisings of that time pitted both sons and daughters against traditional conceptions of gender roles, although in different ways. Sons challenged the authority of their fathers and the patriarchal rigidity of traditional institutions, including time-honored constructions of manhood. They did not, however, defy the hierarchy of gender. By contrast, the revolt of daughters against patriarchy placed them in opposition to male supremacy both inside and outside radical ranks. Both the utopianism that infused these movements and the lived experiences of freedom and community offered many women new possibilities for self-definition and schooled them in political action on their own behalf, even as such experiences made clear the pervasive sexism of the time. The sharply contrasting revolts of young men and young women gave rise to conflicts within these movements and inspired the subsequent emergence of feminism around the globe. As a result, the international 1968 initiated a revolution in gender relations that continues to this day.

In “Solidarity Under Siege: The Latin American 1968,” Jeff Gould notes that only the Wars of Independence and the strike wave of 1919 rival the dimensions and simultaneity of the 1968 protests in Latin America. His article looks at events in Uruguay, Brazil, and Mexico, the most important sites of protest, and seeks to shed light on the common characteristics of this vast, popular mobilization. He argues that its most significant feature was an egalitarian ethos which challenged virtually all social and political relationships. In the course of his article, Gould debates the views of Immanuel Wallerstein, who had argued that the New Left undermined the social democratic and Communist left that had become, in Latin America as elsewhere, a support of the world capitalist system. A key legacy of the mobilizations of 1968, to be sure, was the weakening of the traditional left and the beginning of its agonizing demise. In Latin America, as in Europe, however, the 1968 mobilizations operated between two poles: the radical or revolutionary left and the Communist parties aligned with the Soviet Union. Gould’s article suggests a far more complex relationship between the two camps of the left than the bitter opposition Wallerstein depicts.

In the last article in the forum, “Youth Movements: Travel, Protest, and Europe in 1968,” Richard Ivan Jobs shows how the events of that year marked a turning point in the emergence of an international social cohort based on age, one which professed internationalist and even Europeanist sensibilities as opposed to nationalist ones. The youth of Europe sought out revolution where it could be had, and one of the changes they demanded was in the state frontier controls inhibiting their continent-wide mobility. Thus, the events of May 1968 in Paris, for example, should be seen in a context wider than France by recognizing how they attracted revolutionary youth from across Europe. His article recasts 1968 as a significant moment in the cultural history of European integration by showing how young people, by virtue of their travels, began to express themselves as citizens of Europe rather than a particular nation, and how they had come to identify with one another as a transnational cohort despite their distinct national backgrounds and identities. These young people, migrating between protest sites, saw themselves as part of a new European community, a vision that shaped their demand for a borderless Europe at the same time statesmen furthered continental unity with the creation of the European community.

The June 2009 issue of the AHR will include a roundtable on “Historians and Biography,” and a forum which considers Simon Schama’s History of Britain, both the book and the television series.

—Robert A. Schneider (Indiana Univ.) is the editor of the AHR. He can be reached at raschnei@indiana.edu.