The Making of WWII Behind Closed Doors: A Conversation with Laurence Rees and Robert Dallek 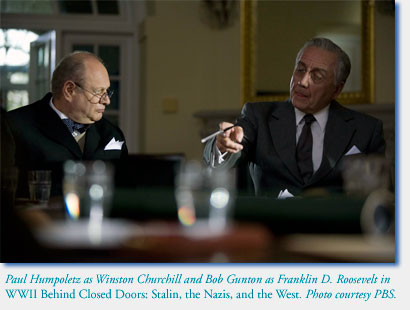 Editor’s Note: The three-part television series WWII Behind Closed Doors: Stalin, the Nazis and the West, (described in the news article, “New Film on Secret Meetings of World War II Will Premiere on PBS in May”) juxtaposes conventional documentary elements with dramatic recreations to offer viewers a new perspective on the war through the prism of hidden meetings of Stalin—first with the Nazis and then with Roosevelt and Churchill. The film premieres on PBS on May 6. The award-winning filmmaker Laurence Rees (Auschwitz: Inside the Nazi State), historian and author, Robert Dallek, who served as one of the academic advisers on the film, and  producers from KCET Los Angeles, which co-produced the film with the BBC, talked about the making of the film, and a transcript of their conversation is reproduced below.

KCET: What does the series offer that is new?

REES: The series offers something new in a number of respects. Huge elements of the series were only made possible because of documents that were discovered in the [Soviet] archives in the 1990s. We would never have been able to know the details of a lot of these meetings if it hadn’t been for the fall of communism. A number of these documents, which were released during the following years, are now no longer in archives that are freely accessible.

We’ve also been able to have access to the most extraordinary eyewitnesses. Most of the people who appeared in this series have never before talked publicly about what happened. The Soviet secret policemen, the people who were part of the regime—all of these people before the fall of communism—were denied a voice. They simply couldn’t say the truth about what had actually happened.

DALLEK: There is a constant interest in World War II. It is remembered as the last good war and the opening of the Soviet archives deepens our understanding.

As they say, the devil is in the detail, and it was the detail that the film was able to get at that gives us a fuller, richer understanding of what tensions were like among our allies during World War II and the relationship between Stalin, Roosevelt, and Churchill.

With the passage of time, the eyewitnesses and others in Russia are much freer to speak about the abuses of the Soviet government toward the East Europeans and toward their own citizens after World War II. This new openness makes a film like Behind Closed Doors very timely.

KCET: Talk about your decision to use dramatic recreations?

REES: I’VE made a lot of previous series about the Second World War, about Nazism, about Auschwitz. And one of the things I was beginning to realize was that, in a way, if you simply use the traditional format of archive and interview, it denies you the opportunity to tell aspects of the story that are extremely important. Namely, the decisions made by the people in power. And so, the idea, the motif of the whole series, was to REVEAL what went on during World War II behind closed doors. And the way we’ve done it, of course, is by dramatizing a lot of the key meetings.

DALLEK: As a professional historian my instinct is to say, let’s not have drama, let’s have the reality but, of course, we can’t recreate the characters or bring them to life. They are all dead. We are not going to get Stalin on camera. So, in a sense, it’s well to have these re-enactments all these years after World War II—60 years. It allows viewers to get a more graphic feel for what the experience of World War II was like, what Stalin was like, what Churchill was like, what Franklin Delano Roosevelt was like, and what their interactions were like.

KCET: How did you reconstruct the dialogue to make it authentic?

REES: All historians know that no source is absolutely 100 percent reliable. Official minutes of a meeting can change things, memoirs can be self-serving, and diaries can sometimes be the same. So it is an incredibly difficult process trying to piece together this mosaic, the number of different sources about what you believe was actually said. And, of course, in trying to decide that, we relied on not just the various archives—the archives of Russia, Germany, Britain, America, Poland, and other European countries—we also relied on the advice of a whole series of academic experts.

You can actually see if you look at the newsreels of many of these meetings the opposite of what went on behind closed doors. The public at the time was told: Winston Churchill meets Joseph Stalin and everything is going wonderfully and these two statesmen are getting along like a house on fire. Whereas we know from the secret minutes of the meeting, that was exactly the opposite of what was actually happening. So, the archive of the time that they put out for propaganda purposes is not telling you the truth. The only way that we could televise the reality of the decision-making process, how these enormously life-changing decisions were made, was by dramatizing using the minutes and other documents to show what people actually said. That I think is very new in what we are trying to do here.

DALLEK: Yes, during World War II there was glamorization of American allies and in particular of Joseph Stalin and the Soviet Union. There was a kind of hokum. Not because people necessarily understood that they were selling the country a bill of goods, but because we were carried away by the mood of the moment. We made Stalin into some kind of saintly figure as 1942 “Man of the Year” on the cover of Time magazine, for example.

KCET: What does the film tell us about Stalin, the main character of the series?

DALLEK: Behind Closed Doors gives us richer understanding of Stalin’s leadership in particular. It gives us more information as to what we already sensed, what we thought, what we believed, and now we know in much greater detail. This is the added dimension.

REES: Though the series is called World War II: Behind Closed Doors, people will notice that the narrative arc throughout the whole six hours is the journey that Stalin takes throughout the war. One of the extraordinary things about Stalin, when you see the documents and you study the minutes of the meetings, is that he never pretends to be somebody else, he is a brutal tyrant and he talks like a brutal tyrant.

KCET: What lasting impact do you think the series will have on our understanding of World War II?

DALLEK: I doubt that we will see more in the way of World War II documentary work that will eclipse this film in any way.

REES: One of the most fascinating things about making this series was being allowed to gain a wholly different perspective on what you think is a familiar conflict. That is what I hope the takeaway will be for the American public.

—Transcript of the conversation courtesy KCET-TV, Los Angeles. This article did not appear in the print version.