On March 10 and 11, 2009, more than 150 college professors, museum professionals, librarians, archivists, and independent scholars gathered in Washington, D.C., for the 2009 conference of the National Humanities Alliance (NHA), of which the AHA is a member. The highlight of the conference was the 10th annual Humanities Advocacy Day. Participants fanned out across Capitol Hill to meet with members of Congress and their staff to urge support for federal agencies that sustain research, education, public programs, and preservation in history and other humanities fields.

Participants who volunteered to take part in the congressional visits learned at Tuesday policy briefings to be effective advocates. On Wednesday, 158 of them met with representatives from 35 states. Participants asked legislators to support $75 million in new funding for the National Endowment for the Humanities (NEH) in fiscal 2010 to address unmet needs in core programs as well as new projects such as the development of digital resources. The increase would also help meet the demand for research funding in the humanities by increasing the acceptance rate for NEH grant proposals from 16 percent to 25 percent (on par with acceptance levels for federal grants in the sciences).

Funding for the NEH has not kept pace with inflation, declining 60 percent from its levels 30 years ago (see graph on page 4). Participants also requested funding increases for the National Historical and Public Records Commission (NHPRC), as well as a five-year reauthorization of the commission, which was often threatened with zero funding during the Bush administration. Participants were heartened to hear on March 11 that the Senate had passed the fiscal 2009 omnibus spending bill, increasing funding for the NEH and funding the NHPRC at its highest level in five years. Increasing funding for the humanities during a fiscal and economic crisis could be a tough sell, so much of the discussion focused on how to convey the educational, economic, and civic value of the humanities to legislators.

A discussion of “The State of the Humanities” hosted by the American Academy of Arts & Sciences on Monday, March 9, focused on that very question. Speakers included Don Michael Randel, president of the Andrew W. Mellon Foundation; David Souter, associate justice of the Supreme Court of the United States; Patty Stonesifer, chair of the Board of Regents of the Smithsonian Institution and senior adviser to the trustees of the Bill and Melinda Gates Foundation; and Edward L. Ayers, president of the University of Richmond. Justice Souter offered an eloquent argument for the civic value of historical thinking. In a talk entitled “History and Legitimacy in Judicial Decisions,” he argued that citizens can only understand dramatic Supreme Court decisions, such as rulings legitimating racial segregation in Plessy v. Ferguson and striking it down in Brown v. Board of Education, when they know how “the receding past lets us perceive what an earlier generation could not so easily see or face so readily.” He argued that “where history’s understanding is missing, cynicism will take its place,” decreasing the legitimacy of government and with it the ability to govern. A democratic society thus must be committed to supporting teachers and scholars in their efforts to “develop a sense of history in every mind they can open.” Further developing the theme of the democratic value of humanities education, Edward Ayers noted that immigrant, minority, and low-income students are less likely to major in or take courses in the humanities than elite students, meaning that large numbers of American are not being exposed to “the wonder of the humanities” or learning the habits of mind cultivated by a humanist education, which “teach people how to deal with complexity.”

A session on Tuesday focused on the January 2009 launch of the “Humanities Indicators Prototype,” a quantitative analysis of the state of the humanities in the United States. It was compiled by the American Academy in collaboration with several professional organizations, including the AHA and the National Humanities Alliance. The prototype study is intended to provide data to help advocates for the field work more effectively with policy makers and university administrators. It collected data on primary and secondary education in the humanities, undergraduate and graduate education in the humanities, the humanities workforce, humanities funding and research, and the humanities in American life. The data confirms the overuse of contingent faculty to teach humanities courses; only 53 percent of humanities courses were taught by full-time tenure-track faculty in 2004. Data also revealed the vital need to provide professional development opportunities for K–12 history teachers. In 2000, only 29 percent of middle school history students and 37.5 percent of high school history students were taught by a highly qualified history teacher, lower than for any other subject. On a brighter note, the number of undergraduate humanities majors has remained relatively steady since the mid-1980s. See www.humanitiesindicators.org for additional information. 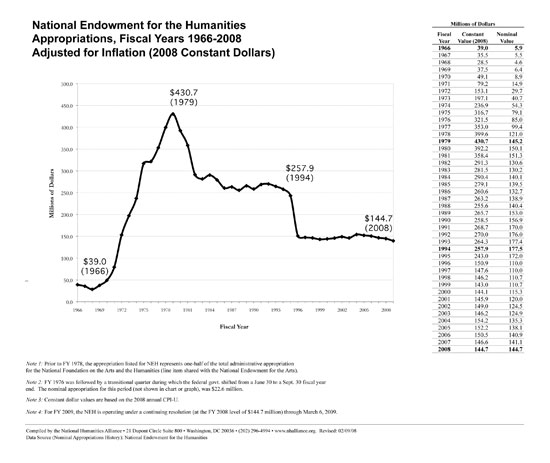 At a closing reception held in the Rayburn House Office Building, Carole Watson, the recently appointed acting chair of the National Endowment for the Humanities, expressed her appreciation for participants’ support, noting that the humanities “enlighten individuals and sustain communities in every part of the country.” Representative David Price (D-N.C.), chair of the Congressional Humanities Caucus; and Robert Berdahl, president of the Association of American Universities, also addressed the group.

The conference left participants better informed about the challenges and opportunities facing the humanities, and energized to advocate for continued federal funding for the programs that sustain the field. For more information about the National Humanities Alliance and the policy issues discussed at the conference, see www.nhalliance.org.