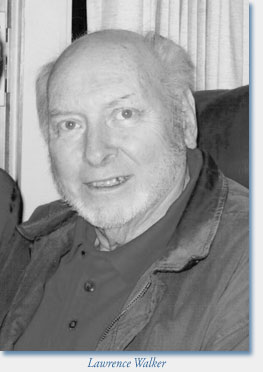 Lawrence (Larry) David Walker died in Salt Lake City on January 27, 2009, at 77. He was born in Las Animas, Colorado, on October 4, 1931, the youngest of six children of Edward Walker Sr. and Annie Leonard Walker. His was an Irish-American family of modest means. Walker was always immensely proud of his Celtic heritage, and he identified throughout his life with ordinary men who resisted oppression.

He attended Catholic schools in Pueblo, Colorado, and vented some of his anger in the boxing ring at the Pueblo “Steel Y.” At 16, he won the Southern Colorado Golden Gloves Welterweight Championship, Class B. It was a useful skill in a rough steel mill town. Although he did not continue his boxing career, he retained a boxer’s reflexes for the rest of his life. Walker graduated from Pueblo Junior College with an associate’s degree in 1950. A teacher at the college persuaded him to continue his education, and he graduated in 1953 with Great Distinction from Stanford, where he was initiated into Phi Beta Kappa. After graduating, he worked as a credit investigator for Dun and Bradstreet in San Francisco and taught high school in San Diego. He resumed his studies and received a master’s in European history from Stanford in 1957 and a PhD from Berkeley in 1965. He was the first member of his family to earn a doctorate. During the summers, he supported himself and his wife Lee, whom he married in 1954, by working in a produce warehouse, as a steelworker back in Pueblo, and as a toll collector on the San Francisco-Oakland Bay Bridge. He was always deeply grateful to his father-in-law, Charles Arthur Barlow, a great believer in education, for financial help in completing his graduate studies.

He taught modern European history, family history, and historiography at the University of Southern California from 1964 to 1969 and at Illinois State University from 1969 until his retirement in 1989. Catholic University Press published his revised doctoral dissertation in 1970. In Hitler Youth and Catholic Youth 1933–36: A Study in Totalitarian Conquest, he examined the worthy but ultimately futile struggle of the Catholic youth movement to preserve the rights it had been guaranteed in 1933 by Hitler’s concordat with the papacy. Walker additionally wrote an article examining the concordat in more detail, which was published in a French scholarly journal in 1974.

A research grant from the National Endowment for the Humanities allowed him in 1971–72 to begin research in Germany on the Catholic clergy’s response to Nazism. An early practitioner of quantitative history and prosopography, he utilized Gestapo records to ascertain which German and Austrian priests were most likely to oppose the Nazis. Contrary to expectations, it was not “young firebrands” but senior parish priests who spoke out. He presented his findings in a series of articles on Bavaria, Vienna, and Limburg that appeared in The Catholic Historical Review (1979, 1983) and in Historical Social Research (1983). With his wife, he mined some of the same material to examine the connection between the anniversaries of important events in priests’ lives and the dates of their deaths in an article that appeared in Omega: Journal of Death and Dying (1989/90).

Larry Walker was also interested in psychohistory and historiography and wrote several articles in both fields. He was attracted in particular to Marc Bloch and published two articles about him in History and Theory (1963, 1980).

Although he suffered during the last years of his life from idiopathic pulmonary fibrosis that severely limited his mobility, Walker remained an avid reader to the end. He conducted an extensive e-mail conversation about his reading, thoughts, and current events with numerous friends, many of whom considered him their best friend and most of whom viewed him as their best correspondent. He is survived by his wife of 54 years, B. Lee Walker, professor emerita of nursing at the University of Utah; two sons, Lawrence and Gregory; and five grandchildren. He was professor for 25 years but a student for 77.