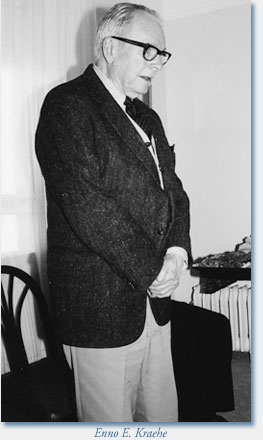 Enno Edward Kraehe, William W. Corcoran Professor of History emeritus at the University of Virginia, died at the University of Virginia Medical Center on December 4, 2008, five days before his 87th birthday. He was the leading American scholar on the Congress of Vienna and of its most important and colorful participant, Prince Clemens von Metternich. Kraehe’s book Metternich’s German Policy, Vol. I: The Contest with Napoleon 1799–1814 (Princeton Univ. Press, 1963) was nominated for a Pulitzer Prize. His second volume, Metternich’s German Policy, Vol. II: The Congress of Vienna, 1814–15 (Princeton Univ. Press, 1983) was co-winner of the Beta of Virginia Phi Beta Kappa chapter’s prize for best book in 1983, and was honored with the Best Book Award of Phi Alpha Theta in 1985. Regrettably, a third projected volume, covering the course of Metternich’s German policy through 1848, was not completed at the time of his death.

Enno Kraehe was born in St. Louis, Missouri, and he earned an AB and MA from the University of Missouri and the PhD from the University of Minnesota. During his career he taught at the University of Kentucky, 1948–64; the University of North Carolina at Chapel Hill, 1964–68; and finally the University of Virginia, 1968–91. In 1977 he was awarded the William W. Corcoran Professorship at the University of Virginia. His other academic achievements included a Fulbright Fellowship to Austria, a Guggenheim fellowship, and a resident scholar appointment at the Rockefeller Study Center at Bellagio, Italy. He was a life member of the AHA, and one of the founders of the European History Section (EHS) of the Southern Historical Association (SHA). The EHS honored him in 1985 with a distinguished service award and again with a paper in his honor in a session devoted to the “Founding Fathers of the EHS” at the SHA meeting in Atlanta in 2005. From 1969 to 1973 he was on the board of editors of the Austrian History Yearbook, and he served on the board of editors for Central European History from 1967 to 1972.

Enno Kraehe was a devoted husband to his wife, Mary Alice, a university librarian, and a loving father and grandfather to his two children, Claudia and Lawrence, and to his three grandchildren. He was also a very caring and gracious Doktorvater to his numerous PhD students. Many of them remained in touch with their mentor and made him proud by their contributions to the historical profession. Throughout his life he was a lover of opera and classical music, particularly of Richard Strauss, Schubert, and Beethoven. He was also an avid traveler, a passionate swimmer, and a St. Louis Cardinals baseball fan, and he shared both his academic interests and his avocations with his students and friends.

Enno Kraehe was a hero to his family, friends, and former students. Not just a scholar, mentor, friend, and colleague, he was a role model of upbeat bravery. Though in his last days he was blind, had two forms of cancer, and lived with a feeding tube, he went to the polls to cast a vote in the 2008 election. Likewise, in a final conversation with a former student, he said through a telephone rigged to enhance the tones of a man with limited vocal cords, “I really am in better shape than I sound.” Enno Kraehe was blessed to share the last few years of his life in Charlottesville with a devoted friend, Margaret Hemphill. His memorial service on Saturday, December 13, 2008, at the University of Virginia Chapel was memorable for its music and for the memories of a scholar, family man, friend, and mentor.