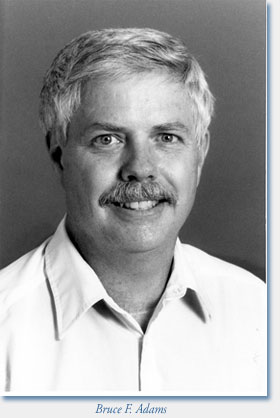 The faculty, staff, and students of the University of Louisville mourn Bruce F. Adams, a member of the Department of History from 1981 until his death on November 30, 2008. Adams was born in Trinidad in 1946, and attended the Defense Language Institute while serving in the U.S. Army from 1967 to 1971. Having gained fluency in the Russian language, he worked for two years as a translator on the Washington–Moscow hot line at the White House.

After leaving the army in 1971, Adams attended the University of Maryland, where he received his PhD in Russian history in 1981. During his doctoral studies, he also worked as a research analyst for the Central Intelligence Agency and in the Department of Labor. His dissertation was based on a year of archival research in Moscow.

Adams came to Louisville as an instructor in 1981, advanced up the ranks, and was promoted to the rank of full professor in 1993. He taught a wide range of courses in Russian history and in the history of civilizations, and became an internationally recognized historian. He published two books, The Politics of Punishment: Prison Reform in Russia (1996) and Tiny Revolutions in Russia: Twentieth-Century Soviet and Russian History in Anecdotes (2005, paperback edition 2007). He was also the editor of two further book-length works and of the Modern Encyclopedia of Russian, Soviet, and Eurasian History, and the author of numerous scholarly articles and chapters in anthologies. At the time of his death, he was engaged in an extensive study of Soviet citizens who emigrated to China and then returned to the USSR. He served as chair of the department from 1995 to 1999.

To his scholarly and academic attainments he added many valuable contributions to the university and the community. He gave generously of his time to speak to community groups and to give interviews to local media. Above all, he founded and chaired the Louisville-Perm Sister Cities Committee, which partnered the largest city in Kentucky with the sixth-largest city in Russia. As the thawing of the Cold War and the fall of communism made it easier for Russians to travel to the United States, Adams and his fellow committee members welcomed many citizens of Perm to Louisville. This involved more than mere good will. Adams worked hard to recruit host families and translators, to facilitate professional contacts, to set up social events, and to see to the countless other arrangements that made the visitors feel at home. And this was a two-way exchange, for Adams himself often traveled to Perm and encouraged students to do the same.

No mere list of achievements can convey the qualities of the person whom some of us knew for 27 years. In his relations with colleagues, students, and staff, Adams was known for his generosity and common sense. Though sometimes involved in professional disagreements, he did not take them personally, and his humorous, down-to-earth attitude helped to reconcile differences. As the author of a book on humor, he could always think of a good joke to enliven even the dullest day. All of us will miss our wise, good-natured, and funny colleague.

Endowed with a quick wit and facility with words, Adams had a special love of crossword puzzles. In fact, he was known not only as a historian but also as a cruciverbalist, or author of crossword puzzles, and among his proudest achievements was the publication of many of his puzzles in the New York Times. His pastimes included listening to music and playing basketball. He also enjoyed the many leisure-time activities that he shared with his wife, Mary, and with his son, two daughters, and grandchildren.