Warning: this article contains spoilers for Season 2 of Bridgerton. Historians rarely get to warn of spoilers.

Historians are only human. Which is why I must confess that I swooned, just a little—maybe a lot—when Anthony Bridgerton declared his love for Kathani Sharma in the second season finale of Bridgerton. Kris Bowers’s version of the Bollywood song “Kabhi Khushi Kabhie Gham” made my heart sing. Kate, Edwina, and Mary Sharma showed women like me—a person of South Asian origin—characters missing from mainstream period dramas until now. 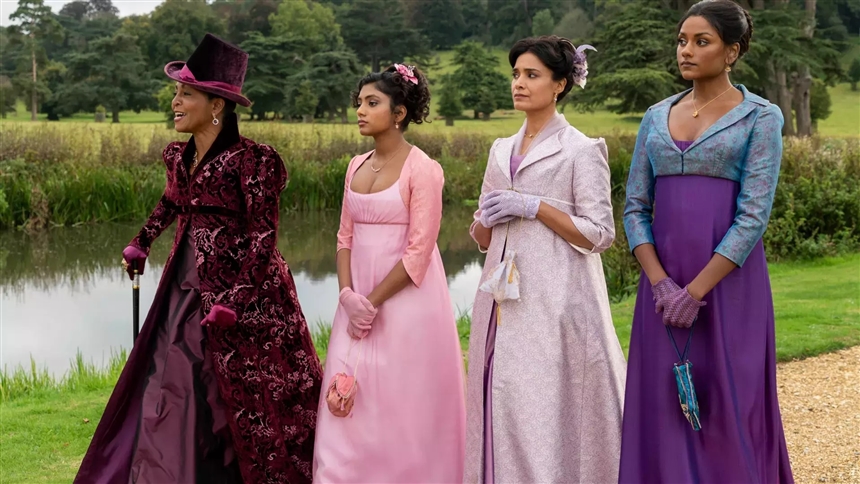 Bridgerton’s Lady Danbury and Edwina, Mary, and Kate Sharma participate in high-society activities like promenading through Hyde Park—activities real women of color may not have been welcome to join. Liam Daniel/Netflix

Regency dramas are a popular form of entertainment in the United States and the United Kingdom, from adaptations of Jane Austen novels to the 2022 film Mr. Malcolm’s List. They depict Great Britain between roughly 1795 and 1837, often centering themes of foiled romance and constrictive gender roles. In both seasons of Netflix’s Bridgerton, based on a series of novels by Julia Quinn, a number of roles went to actors of color, characters written as white in the source material. Such diverse casting is typical of executive producer Shonda Rhimes’s work, and commentators have celebrated this choice as a refreshing take when period dramas such as Downton Abbey have typically ignored race. But other critics denounced the show’s creators for imagining a world in which racism does not dominate the treatment of characters of color.

My inner historian kept poking me as I watched, akin to the metaphorical angel (or devil, probably) on my shoulder (a moral quandary some of my readers clearly lack). As a scholar of race and colonialism, I was truly perplexed by the show’s sidelining of the history of imperialism that would have, theoretically, brought families like those of the Duke of Hastings, Lady Danbury, and the Sharmas to British shores in the first place.

Historical dramas are rarely historically accurate. For those of you who have the luck to not be a professional historian, this manipulation of fact enables the dramatic turns that make these shows a delight to watch. In highlighting characters of color in the show, its creators do them an injustice by ignoring the histories that would have been a central part of their identity navigating the colonial metropole. In the show’s telling, the love match between King George III and a Black Queen Charlotte—whose racial origins have indeed prompted debate among historians—brought two worlds together through racial reconciliation. But Bridgerton ignores Britain’s involvement in the transatlantic slave trade from 1640 to 1807, which brought enslaved peoples from West African ports to London. Those who escaped bondage became a part of the social life of the city; a few rose to prominence as abolitionists and traders. The show also ignores the colonialism that was central to Britain’s modern global identity. Rather than use this history as background, this world glosses over the more uncomfortable elements in favor of a simple celebration of racial equality.

Bridgerton does characters of color an injustice by ignoring the histories that would have been a central part of their identity navigating the colonial metropole.

Enter the Sharma sisters, who arrive from Bombay in time for both the show’s second season and the London “season” when the wealthy and powerful seek to make marriage matches for young women like Edwina. Their mother, Lady Mary, was cut off by her family for running off with an Indian merchant who already had a child of his own, a scandal I do not doubt many of you would revel in gossiping about even today. Kate and Edwina grew up speaking not only English and French but Bengali and Marathi, and they play the piano as well as the sitar. Raised on the estate of an Indian prince who employed their father, they learned the skills required in London society. Yet they retain a distinctly Indian identity. They wear Indian jewelry and put cardamom pods in their tea, as my own mother does with her chai. Before Edwina’s wedding day, her mother and sister perform a haldi ceremony, smearing her face and arms with a turmeric paste to bless her marriage. They embrace their Indian culture and heritage and display them to the world unabashedly, but they merge them with the English traditions and norms required in elite society.

But it is difficult for me, both as a historian and a descendant of colonized peoples, to see the history that would have brought the Sharmas to British shores completely ignored. Not acknowledging race becomes a way of then ignoring it and dismissing it; instead, Bridgerton’s characters do not have to deal with the complexities and conflicts of living in a colonial world. Missing from this narrative entirely is the British East India Company and the role it played in colonizing the Indian subcontinent after the Battle of Plassey in 1757, eventually leading to the establishment of the British Raj in 1858. The events of Bridgerton take place in the middle of this process. India became the jewel in the crown of the British Empire, but at the expense of Indian livelihoods and rights; Indian subjects became cogs in the imperial administrative machine. India remained under formal colonial rule until 1947, long after the end of the Regency era and the abandonment of corsets (which, dear reader, none of you attending the Queen’s Ball: A Bridgerton Experience across the country would survive in for more than an hour).

Does colonialism exist in Bridgerton’s world? It had to, to explain the presence of Black and Brown peoples living and promenading around the “ton.” But in a real colonial world, the “two separate societies, divided by color” that Lady Danbury says were brought together by Queen Charlotte and King George III would have remained segregated. Colonialism was predicated on the racial hierarchies and the constructed inferiority of nonwhite peoples that became set in legislative stone in the 19th and 20th centuries across the British Empire, justifying the imperial project in the first place. In one scene, Queen Charlotte allows Edwina to hold the Crown Jewels. Many of these jewels, including the Stuart Sapphire, were acquired from early imperial expeditions into South Asia. Handing Edwina a necklace made of gems obtained through the violence of colonialism feels like an unjustifiable wrong being made right. But it also feels like an erasure of the history that would have made Edwina who she is.

Most period dramas set in a fictional European or American past do indeed ignore the imperialism on which modern states were founded, including The Tudors and Reign, or sideline it to the shadows of interpersonal and familial relationships, as The Crown does. One exception is The Gilded Age, which tackles New York’s history of racial divisions in a refreshing way for this genre (while still ignoring the history of slavery that brought Africans to the Americas). Bridgerton attempts to sideline the contentious foundations of imperial nations by imagining a world in which race exists but is not the defining factor in class and social hierarchies, making the show almost decolonial in a sense. It allows viewers like me to revel in the casting of darker-skinned actresses in lead roles and to celebrate the Zimbabwean heritage of actors such as Regé-Jean Page playing the heartthrob of the first season. It suggests a world without colonialism, thereby eliminating the need for rethinking a postcolonial portrayal of Quinn’s novels or the domination of white actors in Hollywood. It simply allows these characters to exist as they are, no matter the color of their skin.

Handing Edwina a necklace made of gems obtained through the violence of colonialism feels like an unjustifiable wrong being made right.

At the same time, the show’s representation of characters of color falls into a generalizing trap. Indian critics have pointed to the weird and confusing amalgamation of traditions performed by the Sharma sisters. Within the family, Edwina calls her sister didi, a word used in north Indian languages to refer to an older sister, and Kate calls Edwina bon, a Bengali term for a sister (the actress playing Edwina, Charithra Chandran, had no idea herself what it meant). And yet they also refer to their parents as appa and amma, Tamil terms for father and mother. This mélange of languages from different parts of the subcontinent glosses over which part of India these sisters actually come from, suggesting the creators did not care to go beyond a simple web search for foreign-language family terms. While the language is perplexing, the use of prominent South Asian historical figures is equally confusing. Most period dramas are not shining examples of historical accuracy, but Edwina asks Anthony Bridgerton if he has read the works of Urdu poet Mirza Ghalib (mispronouncing his name in the process). We can forgive Anthony for not being familiar with Ghalib (only 16 years old at that time); his work would not have circulated very far beyond India in 1814. But these inaccuracies can be as damaging as pretending certain histories do not exist, alienating the viewers who would otherwise be able to identify with otherwise marginalized characters and cultures. In glossing over the specifics of race and colonialism, the producers of Bridgerton create an India that would not have made sense to anyone hailing from the subcontinent then—or now.

Bridgerton’s form of decolonization is thus one that can be both celebrated and denounced for its erasure of the very history that British students today are not exposed to in schools, a legacy that suggests that the history of people who look like the Sharma sisters or the Duke of Hastings is not important or relevant in today’s world. For a show that challenges patriarchal norms in complex ways, it has not fought the same battle for its characters of color given the history they themselves would have had to fight to be considered British nobility. Postcolonialism and decolonization are predicated on the existence—and persistence—of colonialism and its legacies. Only by acknowledging this violent and uncomfortable history can Bridgerton give its characters the complexity in their stories that they truly deserve.

Because, dear reader, there was no greater scandal at the time than that of the violence and oppression committed by the British Empire across the globe, no matter how much some may try to imagine it away.

Trishula Patel is an assistant professor of history at the University of Denver. She tweets @trishulapatel.