Historical Modes and the Presidential Sessions of AHA22

The year 2023 will mark the 20th year since the first presidential session debuted at the AHA annual meeting. These panels are a powerful tool through which the AHA president may illustrate a particular argument or highlight specific voices. They are one of the president’s final chances in their official capacity to make a case for their view of history and its role in society. In 2022, Jacqueline Jones’s presidential sessions on “Modes of Historical Story-Telling” brought historians’ interactions with the broader public into the heart of the AHA. The sessions demonstrated the promise of historical storytelling in this challenging moment, and highlighted the work of historians in a variety of professions as they combat pernicious narratives about the past. 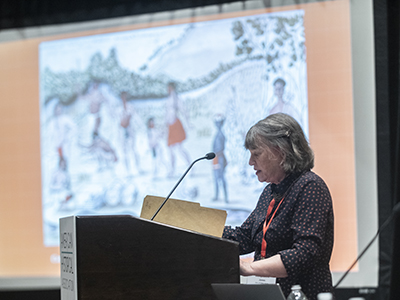 Presidents often choose the theme of their sessions based on their presidential address, and this year was no exception. Jones began the conversation with “Historians and Their Publics, Then and Now,” in which she used her predecessors’ addresses at past meetings to demonstrate the AHA’s changing understanding of what constituted the practice of history and its value. These changes echoed a broader shift among historians toward recognizing more nuanced narratives about the past. From this legacy, Jones identified two ongoing opportunities and challenges currently facing history as practice and discipline. On the one hand, as she said, “history is ubiquitous” and democratized. Online access has made stories about the past easier to access than ever. Podcasts, editorials, films, monographs, biographies, musicals, blogs, and a host of other media deliver historically accurate narratives about the past to fascinated audiences in and out of the academy. The messages in these mediums are also shifting, as campaigns for racial and gender justice have centered historians’ attention on systemic inequities. Yet the spread of more complex histories placed them in the center of a backlash against social justice initiatives. Attempts to erase more inclusive narratives, like the panic over critical race theory and former president Trump’s 1776 Commission, highlight the increasing stakes of sharing stories about the past well. For Jones, this current moment demands that historians take stock of how history engages the public in the present and imagine how best it can evolve in the future.

To address these changing dynamics, “Modes of Historical Story-Telling” brought together historians working in a range of professions. As Jones told me, the panels were intended to “highlight the richness of the historical enterprise,” since thinking about history and its practitioners broadly is key to understanding how to communicate histories to the public and addressing the challenges that historians face. Centering the sessions on how to tell stories about the past “transcends subfields such as time period and region and allows all kinds of historians to compare notes about the most effective ways to tell a good story.”

The assembled specialists offered a wide array of perspectives. One session showed how historians use mixed-media art, poetry, and digital platforms to engage with the pasts and presents of Black and Indigenous people living in what is now Louisiana. Another reflected on writing and illustrating nuanced histories for children, while a third explored the use of oral accounts and folklore analysis to interrogate national mythologies from around the Gulf coast. Finally, an AHA Online session discussed using material culture, film, and nonfiction comics to reach audiences in the academy and beyond. Sessions canceled because of COVID-19 were to consider the dynamics of community storytelling for multiple publics, the challenges of discussing traumatic narratives, and the possibilities of sharing expansive histories beyond academia.

The subject and panel composition represented a partial break from those of presidential sessions over the last two decades. With some notable exceptions, previous sessions tended to center the interests of academic historians and those within their orbit. This trend is unsurprising, given the sessions’ original purpose. The AHA Council designed presidential sessions in 2003 “to address member concerns about the relative absence of senior scholars at the annual meetings and the paucity of sessions treating broad historiographical issues.” Still, presidential sessions have occasionally gone beyond that original brief. For instance, one 2006 session explored the past and present of truth and reconciliation commissions, a session in 2012 discussed the future of digital humanities and included a Microsoft engineer, and several authors and filmmakers presented at sessions in 2013. Generally speaking, however, the presidential sessions have been composed of institutionally affiliated senior faculty and discussions of academic subjects.

The 2022 sessions were united by more than their diverse participants or their innovative methods of storytelling. Jones’s selection of sessions and the discussions within them insisted that interlocutors with the past should center the reality of systemic racism, oppression, resistance, and violence, both past and present. As Ibrahima Seck (Univ. Cheikh Anta Diop of Dakar and Whitney Plantation) argued from his research and museum work, without critical introspection and a commitment to revealing the truth, however ugly, any narrative will conceal as much as it reveals. The question is not whether to discuss such things with the public, but how. Therefore, any discussion about communicating complex pasts is really a discussion about modes of storytelling.

Sessions focusing on New Orleans and its surrounding area illustrated the possibilities of storytelling to challenge problematic myths, demonstrate how past and future problems connect, and uplift and explore narratives within communities. For instance, filmmaker Monique Verdin described the connected history of environmental destruction and the displacement of the Houma people in southern Louisiana as a narrative about her grandmother and the bayous around her home. Verdin’s work consciously entangled past and present with her family and tribal history. She emphasized her points with overlaid contemporary and historical photographs and maps. The result was a powerful story that blended environmental, family, Indigenous, and colonial histories.

Storytelling about the past relies on serious historical analysis, whether done by academic or nonacademic researchers.

The panelists were not insinuating that scholars should abandon their research for nonacademic narratives about the past. Rather, these sessions showed that expert research and historical storytelling depend on each other just as surely as they share the stakes of exploring complex histories. Storytelling about the past relies on serious historical analysis, whether done by academic or nonacademic researchers. Verdin’s documentary work, for instance, combined local stories, personal history, and theory into an approachable and engaging narrative. Others highlighted the exchange between academic and nonacademic work more directly. Author and artist Jonathan Fetter-Vorm’s graphic histories, a genre akin to the graphic novel, rely heavily on academic research and expertise to frame his own images and words. Fetter-Vorm aims to prompt his audience to think historically and critically about the past rather than teaching them serious analytical skills. Yet engaging with his creative storytelling may encourage readers to dig deeper into the questions his work makes them consider. In the end, his ambition is to inspire readers to seek out specialist knowledge by consuming scholarly work—or even becoming history majors.

The presidential sessions also showed how adopting some of the modes and ethos of storytelling could deepen academic scholarship. As Ruth Feldstein (Rutgers Univ., Newark) said of her documentary work, storytelling through film can free scholars to consider the importance of emotions and personal investment in the past, allowing “intimacy to become part of the analytical project.” This same commitment extends to scholarly monographs. For instance, Ava Purkiss (Univ. of Michigan) described her work on Black women’s physical culture as dually invested in historiographic debates and the hope to challenge racist narratives of “Black debility.” Her focus on bringing readers into her analysis by engaging with a problematic public narrative allowed her to unlock the potential of her sources more fully. In other words, her drive to tell an important story empowered her to critically speculate on what the sources might say rather than only what they clearly did.

In the months since AHA22, Jones has heard many positive reactions to these sessions. She attributes this to the breadth of AHA members who are already open to practicing methods that the sessions highlighted. That is, her insistence that history must be a broad and innovative profession reached a ready audience. At the same time, “Modes of Historical Story-Telling” was not a manifesto dictating how history for the public must be done. Instead, as at past AHA presidential sessions, these sessions brought together experts to refine and reflect on the state of an already strong field. Welcoming diverse specialists into the heart of the AHA reveals just how much history as a field and discipline has evolved in the past few years. Continuing to offer high-profile sessions like these creates a space for historical practitioners of all types to share their work and reflect on how to collaborate better in the coming years.