At the National History Center’s latest Congressional Briefing, held last Friday, September 12, scholars offered a fresh perspective on one of the most vexing and polarizing issues currently confronting Congress. Organized in partnership with the German Historical Institute of Washington, DC, the session brought together experts on entrepreneurship in German, Asian, and Latino immigrant communities in the United States. The key question posed by the session was this: what contributions have immigrant entrepreneurs historically made to the American economy? The answers were as varied as the immigrant communities themselves. 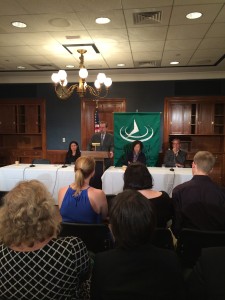 Hartmut Berghoff, the director of the German Historical Institute, drew on information gathered by the
institute’s research project, “Immigrant Entrepreneurship: German-American Business Biographies, 1720 to the Present.” He provided examples of German immigrants who founded highly successful businesses in the United States. Xiaojian Zhao, a professor of Asian American studies at the University of California, Santa Barbara, summarized recent research on Asian immigrant entrepreneurship, highlighting their role in the rapid growth of Asian trade with and tourism in America. Zulema Valdez, a professor of sociology at the University of California, Merced, observed that patterns of entrepreneurship varied widely among Latino immigrant communities.

The presentations and question-and-answer session that followed highlighted a number of issues. Valdez pointed out that the high levels of entrepreneurship among Cuban Americans are related to the fact that many were well educated and highly skilled when they came to the United States, and they received low-cost loans and other forms of assistance from the US government. By contrast, many Mexican immigrants are poorly educated, unskilled, and marginalized. Those who start micro-businesses—many of them women without capital—do so because they can’t find wage work. Zhao acknowledged that educational and occupational skills were important to Asian entrepreneurs as well, but she paid particular attention to language skills, which proved essential to the trade and tourist businesses that Asian American entrepreneurs have so successfully pioneered. Berghoff noted that the heyday of German immigration occurred in a very different economic and regulatory environment from the one faced by modern Asian and Latino immigrants. Successful entrepreneurs usually had specialized skills, such as beer brewing, an enterprise on which German immigrants have left their indelible mark.  He also observed that most business enterprises fail, and we know far less about the German immigrants whose entrepreneurial efforts came to naught than those who succeeded.

Those who attended this highly informative session probably came away with two main conclusions. The first is that the conditions that have encouraged immigrant entrepreneurship are complex and contingent on a variety of factors, including educational, occupational, and linguistic skills; access to capital; and government regulatory policies. The second is this: when conditions have been right, immigrants have given an important entrepreneurial boost to the American economy.