This decline is especially disconcerting when we consider that the overall economy has been improving and the US jobless rate declining. It raises the possibility that this downturn in academic positions for historians is not entirely attributable to the recession, but may be with us for some time. It is especially frustrating in light of the increases we saw in 2010–11 and 2011–12 (fig. 1).

The AHA jobs report, which covers ads posted by the AHA from June 1 through May 31, has typically run in January. This has allowed time for the compilers to survey advertisers and include comparisons to the most recent Survey of Earned Doctorates. For the academic year 2013–2014, however, we are reporting on the initial data, which we gathered over the summer, in September. Additional articles will further examine this situation in light of new information. And it’s important to note that although we are reporting earlier, we are not changing the time frame that we are reporting on.

Figure 1. Positions Advertised with the AHA

In the January 2014 jobs report, which covered the academic year 2012–2013, we published the results of an experiment that included history jobs posted to H-Net during the same academic year. We wanted to expand the size of the sample and check on whether a downturn or uptick reported by us was paralleled in other places where job seekers find openings. We continued the experiment this year, including jobs not advertised with the AHA that were directed at historians or open to historians, using publicly available information posted online. We found 361 such positions, bringing the combined total to 999 positions.

This total includes a variety of jobs for all career stages, but considering that most of the ads are for early-career scholars, and given that this group is arguably most affected by the peaks and valleys in the academic job market, this job report focuses on entry-level positions, and especially on assistant professorships. Jobs beyond the professoriate are important, and jobs at the rank of instructor or lecturer are a large component of the academic market. But these types of jobs are not appearing in any great numbers in the AHA or H-Net job listings, while the assistant professor listings from these two sources are likely a truer picture of the state of that segment of the early-career academic job market.

The breakdown by geographic specialization follows last year’s patterns, but there were more openings for specialists in North America and Europe, and fewer for Asia and Africa. The number of positions open for Latin America/Caribbean specialists and for those focused on Africa stayed roughly the same. The shifts are very small, but the numbers for North America are moving in the opposite direction from the trend discussed in the January 2013 job report, which described this specialization as lagging while other specializations appeared to be recovering. And the number of new PhDs with a North America focus also fell in 2011–2012, according to data from the Survey of Earned Doctorates. 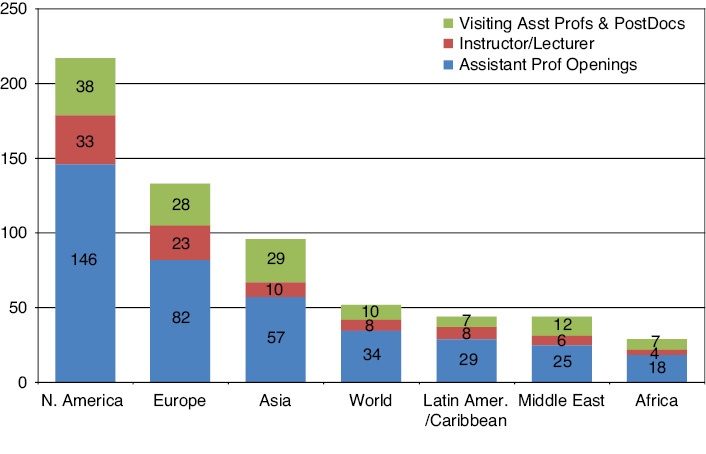 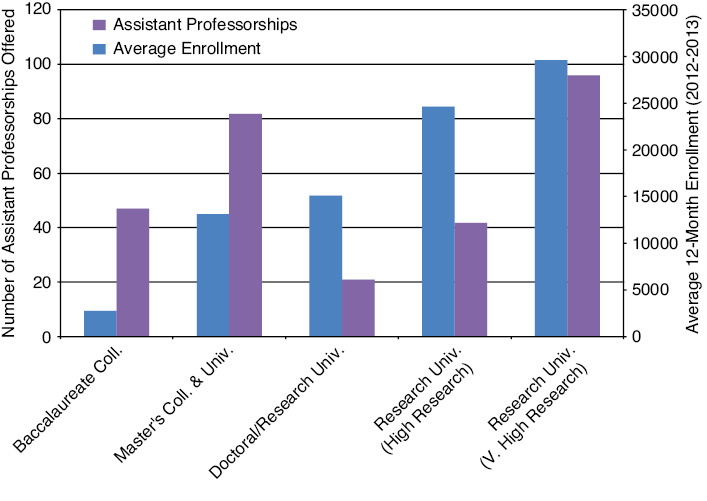 Sources: AHA staff and the National Center for Education Statistics

Master’s colleges and universities that placed ads in 2013-14 were fourth in terms of 12-month enrollments, but second in terms of assistant professor openings. There is also a disparity between open positions and student population in the baccalaureate colleges. This comparison excludes visiting assistant professorships and open rank positions.

The average student population in the master’s institutions that advertised for an assistant professor (not visiting, not open-rank) was less than half that of the research universities with very high research activity (fig. 3). But they offered only 15 percent fewer assistant professor positions. And they offered almost twice as many as the research universities with “high” research activity, despite serving only slightly more than half the number of students.

As has been pointed out in previous issues of Perspectives (most recently in March 2014), for several years master’s institutions have been graduating more history BAs than universities with very high research activity. We have speculated that this shift might have implications for the job market, and we may be seeing that reflected in this year’s data. Further investigation is needed, but this is a trend worth watching.

We clearly cannot be sanguine about the possibility that a recovery in the academic job market for historians will closely follow the US job market in general. Even if the academic market returns to what it was before the recession, the last two years suggest that it will be a bumpy ride back up.