Hard Hats On: Members of the Media Tour Exhibits under Construction at the National Museum of American History

The National Museum of American History hosted a hard-hat tour on Wednesday to showcase its west wing renovation, which will open in phases staring in July 2015. Local and national media joined the tour, and we were led through an active construction zone by NMAH Director John L. Gray. 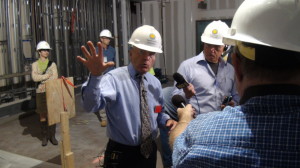 “We literally had to gut all of it,” Gray said. While the original design was groundbreaking for its time when the museum opened 50 years ago, he explained, museum visitors now expect a high degree of interactivity. “The difference between what museums used to do and what they do today is we actively engage the visitor in their experience. It’s not a passive experience.”

Our first stop was at the future site of an acoustic auditorium that will showcase live performances of classical, jazz, and roots music, which will be integrated into the exhibits on American culture. Just below this is the future site of Liberty Plaza, a performance space near the museum’s west entrance for civic discourse and, according to Gray, “a gathering place to discuss key areas and ideas of America.” This will include lectures, reenactments, and forums, and will tie directly to political exhibits on democracy and American independence nearby. 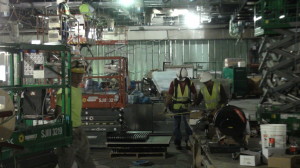 Nothing remains of the old exhibit space.

One floor below, the museum is building an exhibit devoted to the history of business, capitalism, and the marketplace, topics not previously covered by a devoted NMAH exhibit. The exhibit will focus on how business has affected American society, rather than on institutions. “This is going to be one of the most important exhibitions that gets done,” Gray noted. Closely related to this space are the exhibits on inventions, the hands-on Spark!Lab and the Object Project, which puts in the hands of visitors authentic “everyday things that changed everything,” like a cell phone from 1989 or an early bicycle lamp.

On this floor, the glass wall is already in place, allowing us to look west past 15th Street and watch the construction of the Museum of African American History and Culture, also slated to open next year, and the work on the placement of Alexander Calder’s 35-ton sculpture Gewnfritz on the NMAH grounds. It was a vantage point where we were surrounded by the energy of new projects, one that strongly suggested a renaissance in DC’s already-healthy museum scene in the coming year. 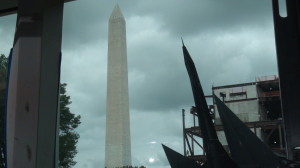 The view from inside the construction zone—another construction zone across the street (the Museum of African American History and Culture), Alexander Calder’s 35-ton sculpture Gewnfritz, and the Washington Monument. The renovation will include a large number of windows, effectively placing the National Mall in the exhibit space.