Dividing up the World: The AHA Taxonomy Project

Insofar as I’ve gotten involved with taxonomy—the task of dividing a field into its component parts and classifying and naming them—I’ve usually done so from the outside, as a historian. From that vantage point, it is a rich object of study. As Michel Foucault argued in The Order of Things, enlightened 18th-century Europeans, under the sway of what he called the classical episteme, latched on to taxonomy as their peculiar intellectual preoccupation. Their drive to taxonomize came from their empiricist epistemology and their resultant belief that “to know” was simply to affix clear and transparent linguistic signs to the things that entered the mind via the senses. According to this logic, such familiar impediments to knowledge as the dead weight of tradition or the distortions of popular error could be efficiently eradicated by imposing a new, refreshed nomenclature on the field in question. Thus Linnaeus went about renaming all the members of the plant kingdom, and Condillac declared that a science was nothing but a “well-made language.”

Whether or not sensitized by Foucault, the historian of taxonomy soon recognizes the power residing in the taxonomist’s verbal exercise. For example, in a chapter of my first book, I surveyed the systems for classifying mental pathology put forth by the founding generation of French psychiatrists; I then immediately confronted the bold claims to professional power—including the privilege of giving expert testimony in criminal court—that they advanced on the basis of their newly identified disease entity, “monomania.”1

Given my earlier encounter with 18th- and early 19th-century taxonomy, I was oddly nonchalant when asked to take up taxonomy as a practical, present-day activity. The specific charge was to form a small subcommittee of Council members to revise the AHA’s taxonomy of time/place and thematic fields. Members of the AHA all have a passing acquaintance with that system of classification. We encounter it when we join the Association and when we renew our membership, each time being asked to select three labels that describe our research interests and three that describe our teaching interests. No one at the Association seems to remember exactly when the taxonomy currently in use was drawn up. Textual evidence suggests that parts of it—including the almost self-parodic rubric “Dark Ages”—date back to a remote era, while other parts bear the marks of more recent tinkering. The document entrusted to my care, then, was a patchwork of incongruous elements of uncertain provenance, but I was optimistic about the ease of repairing it. Compared to the really serious problems the AHA faces, especially the academic job crisis and the increasing reliance on adjunct teaching, taxonomy was, I figured, a piece of cake.

Suffice it to say that such blithe optimism was unfounded. While the consequences of the AHA’s taxonomy problem do, to be sure, pale in comparison to those of the job crisis, the problem itself proved to be intrinsically insoluble. Instead of achieving the crystalline elegance envisioned by 18th-century taxonomists, the three-person AHA taxonomy subcommittee was obliged to fudge. 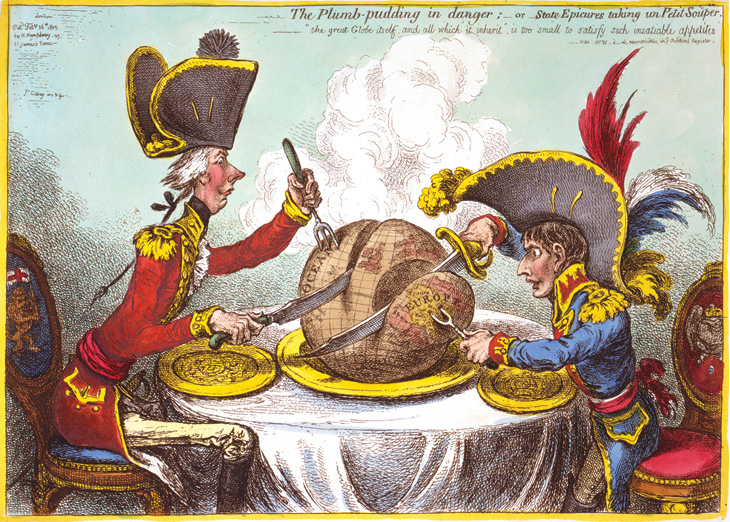 James Gillray’s caricature of 1805, “The plum-pudding in danger, or state epicures having un petit souper [a little dinner],” depicts British prime minister William Pitt and French emperor Napoleon I carving up a steaming dessert in the form of a globe.

That is because—as I should have foreseen on the basis of my own historical research—taxonomy is directly bound up with relations of power. Through its acts of naming, it either ratifies existing power relations or attempts to shake them up. Even the semblance of pure, disinterested knowledge eludes it. Small wonder, then, that the hot spots of our taxonomy project closely tracked the geopolitical hot spots of today’s world and that they tended to congregate in the Middle East—or, as I should say with my recently heightened awareness (see below), what is now called the Middle East.

Thus North Africa presented itself to the subcommittee as a contentious space. The old AHA taxonomy had hooked it on to the Middle East because of the Arabic language and culture prevalent there; indeed the region is now widely known in the West by its Arabic name, Maghreb, and the mellifluous acronym MENA—Middle East and North Africa—has currency in many US history departments. However, attaching North Africa to the Middle East had meant, in effect, lopping it off of the land mass of the African continent, a maneuver that the old AHA taxonomy reflected by nowhere referring to an unmodified “Africa” but instead calling the relevant entity “Sub-Saharan Africa.” Here the taxonomy subcommittee faced a fork in the road. Should we restore the Mediterranean littoral to Africa, we wondered? Should we, in other words, make Africa whole again? Who knew that the humdrum-sounding taxonomy subcommittee possessed such world-shaping capabilities? Lacking expertise on these particular geographical regions and their histories (our subcommittee was composed of an Americanist, a modern South Asianist, and a modern Europeanist), we turned to more knowledgeable colleagues for advice.

Not surprisingly, since we were envisioning a significant land transfer, the experts were themselves divided. None of the historians of the Middle East we consulted seriously considered relinquishing North Africa, some invoking the argument of the common Arabic heritage, some mentioning the long-entrenched institutional arrangements in the American academy that would be upended by such a divorce. The historians of Africa, who stood to gain from an acquisition of new turf, were, on the other hand, visibly ambivalent. Some found the status quo based on the common Arabic heritage and the historical orientation of the region toward the Mediterranean still rational and compelling. Others noted that the same status quo reinforced a distasteful racial divide or, alternatively, that a small handful of historians had, by studying trade routes that crosscut the Sahara, established vital linkages between North Africa and its sub-Saharan counterpart that belied the ancient division.

Faced with these conflicting arguments, and aware of their political weight, the taxonomy subcommittee opted for compromise. We placed “North Africa” on the taxonomy twice—once as the partner of “Middle East” and once as a region of “Africa” (now unqualified by any adjective). We also added “Trans-Saharan” to the other regions (East, West, Equatorial, etc.) of Africa. AHA members who work on North Africa can thus decide for themselves whether they self-identify as Africanists or as scholars of MENA. Whatever their geographical tendency, they will find it mirrored in the taxonomy.

In these deliberations, we had been using “Middle East” as if it were an unproblematic term. But of course it was mired in the long-outdated geopolitical assumption that the regions of the world should be named as they appeared to an observer in Europe, the tacitly agreed-upon center. For some reason, another key term of that vintage, “Far East,” did not figure in the AHA taxonomy we inherited; we surmised that, in an earlier piecemeal revision, someone had already removed it and replaced it with the value-neutral “East Asia.” One of the expert colleagues we consulted advised a similar metamorphosis of “Middle East”—that is, its replacement by “West Asia,” a rubric independent of the perspective of any hypothetical viewer. Once this novel suggestion was planted in our minds, its perceived relevance to the taxonomy quickly expanded. For in addition to “Middle East,” the old taxonomy contained the hoary “Ancient Near East.” Cursory research indicates that “Middle East” and “Near East” are different names for approximately the same geographical terrain, both devised by a hypothetical European surveyor of the world who initially regarded the region as “near” the European center and who subsequently—and most dramatically after the dissolution of the Ottoman Empire in 1918—relegated it to a “middle” distance. The older name, “Near East,” has stuck among scholars who study the region’s antiquity: its role as the cradle of human civilization and the birthplace of three world religions; the newer name, “Middle East,” has replaced it for the later period. The terms “Ancient Near East” and “Middle East” signify forcefully in English, summoning up images of archaeological treasures or of newspaper headlines announcing international tensions. Did we want to strip them of their layers of accumulated connotations by replacing them with the colorless, non-evocative “West Asia”? Precisely such a move would have gladdened the heart of an 18th-century taxonomist. But we, more responsible to extant institutions than were our Enlightenment forebears, held back. We opted this time for a different kind of doubling: placing “West Asia” in parentheses after both “Middle East” and “Ancient Near East.” Unlike in the case of North Africa, we did not ask AHA members to choose. Instead we sought to nudge them toward considering an untraditional label—one more in keeping with today’s decentered conception of the world.

The revision of the thematic categories, largely unmoored from geography, proved easier. To add such relatively new fields as “animal studies,” “borderlands,” “history of capitalism,” “history of emotions/senses,” and “memory studies” to the AHA repertory required none of the corresponding exclusions entailed by renaming and reclassifying regions of the world. Unlike the boorishly unrestrained imperialists in Gillray’s early 19th-century cartoon—reproduced here to show the membership what was avoided—the AHA taxonomy subcommittee discharged its task of dividing up the world with all due circumspection.

Help Us Get the New Taxonomy Right

As we refine the draft of the new taxonomy, we will be asking AHA members for input. AHA Communities (communities.historians.org) will offer a space for comments and discussion about the draft. We want as many members as possible to participate in the conversation and to share the draft with their colleagues. Wide participation will lead to a better final product—one that lets members and potential members know that the AHA offers them an intellectual home.