Tara Thompson Strauch is a visiting assistant professor of history at the College of Wooster. She lives in Wooster, Ohio, and has been a member since 2011. 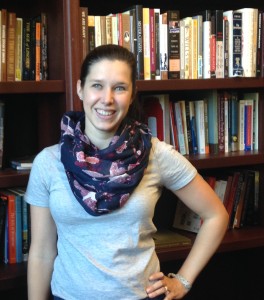 That is a tough question! It’s a toss-up; either American Girl books or the genealogy 4-H project I did when I was 10. I was simultaneously enthralled by the choices Felicity’s* parents made and by the newfound knowledge that my great-grandmother hoarded sugar under her bed in the years following the Great Depression.

*For those of you who might not be familiar, Felicity was the daughter of a Loyalist during the Revolution.

My current book project examines the transformation of two early modern rituals, oaths and days of thanksgiving and fasting, during the revolutionary period. These rituals created both tangible demonstrations of American identity and divisions among Americans based on religious belief, ethnicity, and politics. By the end of the 18th century, America had redefined citizenship through these rituals and the rituals themselves were similarly transformed. The book looks at specific moments of conflict over these rituals from Quaker objections to days of thanksgiving and fasting to debates over the religious connotations of oaths during the constitutional ratification process.

I’m also working on two articles related to the project; one which places Washington’s first presidential inauguration in historical context and another which looks at how changing political beliefs also changed the thanksgiving ritual in 18th-century America.

I only graduated a little over a year ago so I’m not sure my interests have had time to change. However, as I have begun teaching more varied classes I have found new avenues of thought. For example, I’m teaching a class on the Great Lakes between 1750 and 1815 during the fall semester. Preparing for this class has brought me new ways of thinking about identity and belonging in North America during a time of constant political change.

I love to show YouTube clips before my classes start that are related to the topic of the day. I’ve discovered a lot of interesting, wacky, and thought-provoking pieces that way. An old favorite of mine is the musical 1776 with William Daniels as John Adams. Despite its inaccuracies I think it gives students some intellectual food. “Molasses to Rum to Slaves” is such a dramatic retelling of the trans-Atlantic exchange of people and goods.

For something off the beaten path, I suggest a YouTube channel called “Great Depression Cooking.” This show features Clara, a great-grandmother and Depression survivor making Depression-era recipes while talking about her experiences. In my favorite episode Clara makes dandelion salad and talks about working at the nearby Hostess (as in Twinkies) plant.

I most value the profession’s capacious coattails. A historian is such a broad term; they come in a wide variety of eras, specialties, and interests. This breadth means that I am always learning new things and that I am constantly finding my understanding of the 18th century is being deepened by the work of people in far different specialties. I find myself constantly saying, “I never even thought about that!”

I can’t really imagine NOT belonging to the AHA. It provides an instant community of scholars and a multitude of benefits both concrete and abstract. The AHA is like those old buffet slogans, “Come for the food, stay for the friendships!”

While standing in the check-in line at the 2013 meeting feeling slightly overwhelmed by the number of people I met–no fewer than three friends of my PhD advisor who spoke fondly of him and encouragingly to me. As I walked out of the ballroom I ran straight into two of my former undergraduate professors. I truly felt welcomed to the party.

I am passionate about pedagogy. My goal every year is to find new ways to help my students become aware, engaged, and analytical citizens of the world. Beyond that, I’m a big believer in making communities whether that is through Twitter, the academy, a favorite pastime, or religion.

Now I really want to know more about how other historians came to love history and historical thinking. Just thinking about those childhood experiences reenergizes me for my work. We should all spend more time finding our child-like curiosity. Think we can make an AHA roundtable about that?