Who Is in Control?

On October 2, 2020, President Donald Trump exhibited potentially life-threatening symptoms from COVID-19 and abruptly entered Walter Reed Medical Center for urgent medical attention. He will spend multiple days in the hospital and is reportedly receiving experimental drugs from military doctors. If his symptoms worsen, the president might have periods in which he is unable to perform his constitutional duties. This raises a rare but recurring question in American history: who wields power during moments of presidential incapacity? 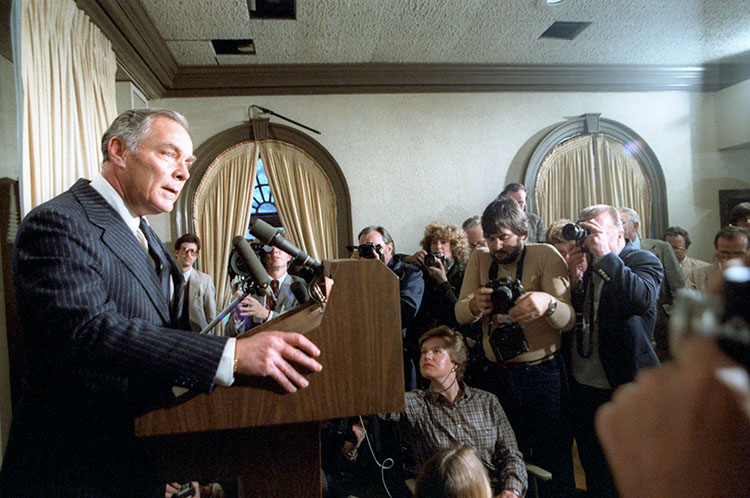 Our country has experienced similar moments in the recent past, moments of serious confusion and grave danger. Forty years ago, a hospitalized president left the White House without a clear line of authority in place. Secretary of State Alexander Haig infamously proclaimed that he was “in control.” He was not. Now our country faces a similar crisis. President Ronald Reagan’s near assassination, and its immediate aftermath, offer a warning worth revisiting.

On March 30, 1981, John Hinckley Jr. fired six shots at President Reagan as he exited a luncheon at the Washington Hilton Hotel. The final bullet hit the 70-year-old president under his left arm, causing a lung to partially collapse. The bullet lodged itself less than an inch from Reagan’s heart. The Secret Service rushed the president to George Washington University Hospital, where he underwent nearly two hours of emergency thoracic surgery, followed by extensive postoperative treatment. During the hours of his operation and the immediate postoperative recovery, the president did not have access to the nuclear codes and was unable to communicate with government officials or elected representatives. The United States was without a commander-in-chief.

The White House was unprepared for the moment. Vice President George H. W. Bush remained in Texas, not returning to Washington, DC, until hours after Reagan’s surgery had begun. The cabinet secretaries, national security adviser, and executive staff were confused about how to proceed. Bombarded with questions from the press, state leaders, and foreign governments, the president’s spokesperson Larry Speakes had few answers about the president’s condition or how the government would function in his absence.

The White House was unprepared for the moment.

Haig wanted to bring order to chaos, and to warn foreign adversaries—the Soviet Union foremost among them—against taking advantage of the confusion. He worried about a Soviet invasion of Poland, where the Solidarity workers’ movement was striking against communist authority, and he had received a briefing about Soviet submarines operating unusually near the East Coast. To show strength and focus, Haig told reporters: “As of now, I am in control here, in the White House.”

In fact, Haig did not have authority to use any presidential powers. This was immediately evident to the news media, members of Congress, and other figures in the administration, who uniformly rejected Haig’s power grab. Some even alleged that he was staging a coup. Having acted impetuously in a moment of crisis, Haig’s poor judgment was multiplied by the dangerous ambiguity of the situation.

The chaos in the White House turned Reagan’s near death into a government-wide crisis.

In the wake of Haig’s comments, the White House prepared a letter consistent with the procedures laid out in Section Four of the 25th Amendment, intended for the cabinet and vice president to sign, turning over power temporarily to the latter. The president recovered from surgery before the letter was signed. But for many hours, no one was in charge. The chaos in the White House turned Reagan’s near death into a government-wide crisis. If a need for presidential decision-making on the use of military force or the distribution of aid had arisen, cabinet members likely would have fought one another. This pattern played out on nuclear matters: Haig told reporters that the United States did not need to go on nuclear alert after the shooting. Secretary of Defense Caspar Weinberger disagreed, and raised the nuclear alert despite Haig’s assertion. Ambiguity about authority created disunity, confusion, and additional dangers.

The crisis we are living through today is arguably more difficult. The president’s health is uncertain and could change quickly. The United States confronts dangerous adversaries abroad and a domestic landscape rife with conflicts over racial justice, immigration, voting, and a viral pandemic that had already claimed the lives of more than 200,000 Americans before (it now seems) reaching the Rose Garden last Saturday. The White House might find itself pressed to respond quickly to an imminent threat when the president is not sentient. President Trump’s advisers would do well to take heed of 1981, setting out a clear and transparent plan for the transfer of authority should he become unable, even temporarily, to fulfill his elected office.

Jeremi Suri holds the Mack Brown Distinguished Chair for Leadership in Global Affairs at the University of Texas at Austin, where he is a professor in the department of history and the Lyndon B. Johnson School of Public Affairs. He tweets at @JeremiSuri.