A National Day of Action

At a moment of intense protest against racial injustice, when history and historical monuments have emerged as key flashpoints in political and social debates, the four of us wanted to demonstrate that historians can offer clear, concise examples of good history. On September 26, 2020, we, and dozens of other historians, participated in the Civil War history day of action. At historic sites across the United States, participating historians presented evidence to disrupt, correct, or fill out the oversimplified and problematic messages too often communicated by the nation’s memorial landscape. Organized under the hashtag #WeWantMoreHistory, the event provided a vehicle for some historians to step into the role of public intellectuals, connecting them with a long tradition of historians engaging with the civic lives of their communities. The day of action also connected historians with each other, building a community of scholar-activists online and off. 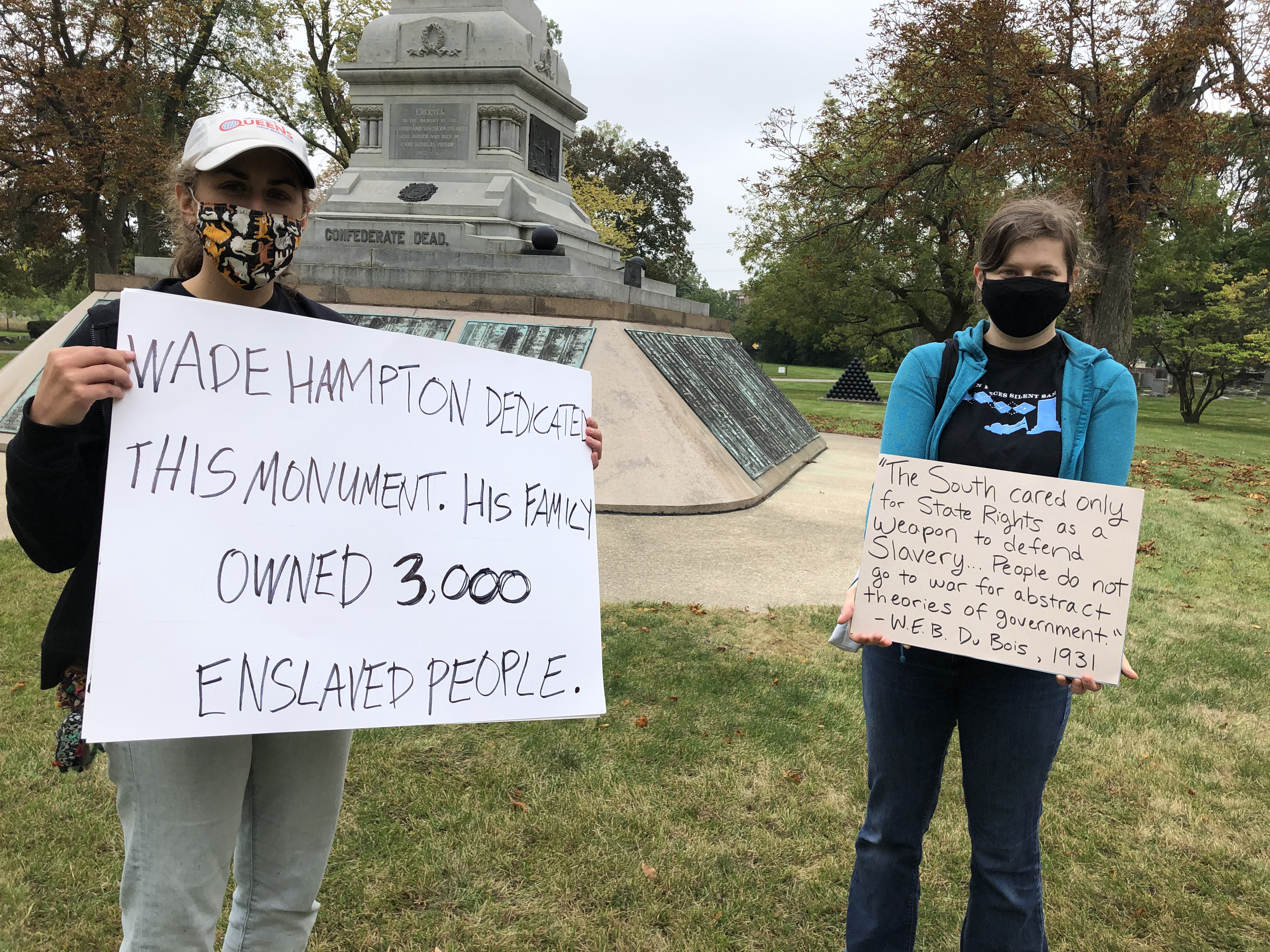 The plan began to germinate soon after July 4, 2020. Motivated by both recent Black Lives Matter protests and the planned descent of far-right militia members on the Gettysburg battlefield over the holiday weekend, Scott and some friends stood near the monument to Robert E. Lee at Gettysburg National Military Park. The group held signs that challenged a false but popular narrative about Lee and emphasized that Lee was a slave owner who was often cruel to the people he enslaved. Scott’s approach to intervening in the dominant historical narrative was born from his ongoing efforts to insert Black history into spaces dominated by white supremacy.

Their peaceful demonstration met with resistance from the assembled militia members amid an environment that exceeded the National Park Service’s (NPS) ability to respond. In response, Patty Hancock, Scott’s spouse, suggested the possibility of a similar nationwide public event. Scott reached out to Greg and Kate, editors of the Journal of the Civil War Era, about taking the demonstration national. The journal’s blog, Muster, edited by Hilary, became our chief organizing tool. We issued a call for action on Muster and held a Zoom webinar in which Scott offered his expertise based on his years of similar actions at Gettysburg. About 80 people registered on a Google sign-up sheet for updates.

For the September 26 event, Scott gathered three dozen people at Gettysburg National Military Park, including an agricultural worker, IT experts, an accountant, a retired state trooper, a lawyer, a grocery store manager, a nurse, a personal trainer, a retired college president, a pastor, two elementary school teachers, a counselor, a stay-at-home dad, and a few elementary school students. They held signs with statistics from primary sources about how many Black people were kept as property by Lee and slaveowners in different states, as well as quotes from southern leaders that made clear their perspectives on the centrality of slavery as the war’s catalyst. Scott and Greg offered informal presentations that drew on the work of their fellow historians, teachers, and National Park Service educators. The group called for more public attention to the history of slavery and emancipation in hopes of both improving the public’s understanding of the past and motivating visitors to work toward a more just future.

The day of action connected historians with each other, building a community of scholar-activists online and off.

Similar events took place across the country. In North Carolina, Hilary met Melissa Stuckey, Chas Reed, and other faculty and students from Elizabeth City State University at a United States Colored Troops (USCT) Civil War Trail Marker at Mariners’ Wharf Park to hold signs featuring information about the experiences of Black soldiers and veterans in the region. In Chicago, Kate convened with two Northwestern PhD students at Confederate Mound, which was dedicated in an 1895 Memorial Day ceremony featuring a keynote address by Wade Hampton III and honoring other prominent Confederates. In New Orleans, at the suggestion of historian Justin Nystrom (Loyola Univ. New Orleans), Jonathan Earle (Louisiana State Univ.) visited the US Customs House and talked about the “battle of Liberty Place.” In New York City, LeeAnna Keith (Collegiate School for Boys) and her students designed signs marking key locations in the New York City Draft Riots. In St. Louis, Lauren Thompson (McKendree Univ.) displayed signs at the site of a large slave pen and the Thomas Hart Benton statue. At the Crater in Petersburg, Peter Carmichael (Gettysburg Coll.) talked to more than 20 visitors about the need for more attention to the USCT who fought and died there. There were many other events and scores of historians who participated online using the Twitter hashtag #WeWantMoreHistory to draw attention to and create an archive of their activities. People followed along in real time, publicizing and commenting on the event.

The process of organizing and executing the day of action taught us a great deal. It showed that historians of all kinds, from university professors to public historians and so-called “buffs,” are excited about stepping beyond their institutional constraints to bring historical context directly to people. The energy on Twitter that day made it clear that people working outside of K–12 or higher education understood the implications of our hashtag and embraced it. Though we had discussed at length how to respond to trolling and potential online criticism, the response was almost uniformly positive.

Doing “good history” is, as we all know, a never-ending process.

We learned a great deal about the challenges of gathering on NPS sites, including the nuances of permitting processes and about the realities of free speech zones. We also developed newfound respect for our colleagues working in the NPS and in public history, many of whom have done extraordinary work on issues surrounding slavery and Reconstruction in the past decades. We recognize that many NPS interpreters and superintendents find themselves in difficult positions on such issues, and we appreciate the work they do to improve displays and contextualize memorials not of their own making, often with limited funding and support.

We hope the day of action and its hashtag inspire historians working primarily in higher education to reach beyond the institutions we are most familiar with. Opportunities abound for historians to research the histories of their own communities and to nurture relationships of mutual respect and trust with people—including K–12 teachers and public historians—with whom they might collaborate. We have been in conversation with many public historians who welcome and desire such connections.

Doing “good history” is, as we all know, a never-ending process. Our hope is that the outpouring of activity on September 26, 2020, inspires many to continue what we have long been doing, consider what else we might do, and forge connections with others who share our goals. We plan to organize a second day of action for September 18, 2021. Your questions and comments are welcome as we begin preparing for next year’s #WeWantMoreHistory event. If you’re interested in joining our mailing list, please contact us or fill out our Google form.