The Tudors Are Trending

In August 2019, Barack Obama put Hilary Mantel’s 2009 novel Wolf Hall on his summer reading list. While he noted that Mantel’s “epic fictionalized look at Thomas Cromwell’s rise to power” had been released a decade earlier, he joked that he had been “a little busy back then, so I missed it.” Also in 2019, Katherine of Aragon spent a heady 24 hours trending on Twitter. Earlier this year, Henry VIII’s “ex-wives” arrived on the Broadway stage in the musical Six. In anticipation of their debut, superfans from the “Queendom” dressed up as their favorite, ill-fated Tudors and greeted cast members with what one New York Times reporter called “Beyoncé-at-Coachella screams.” The Tudors are bigger than ever. Again. 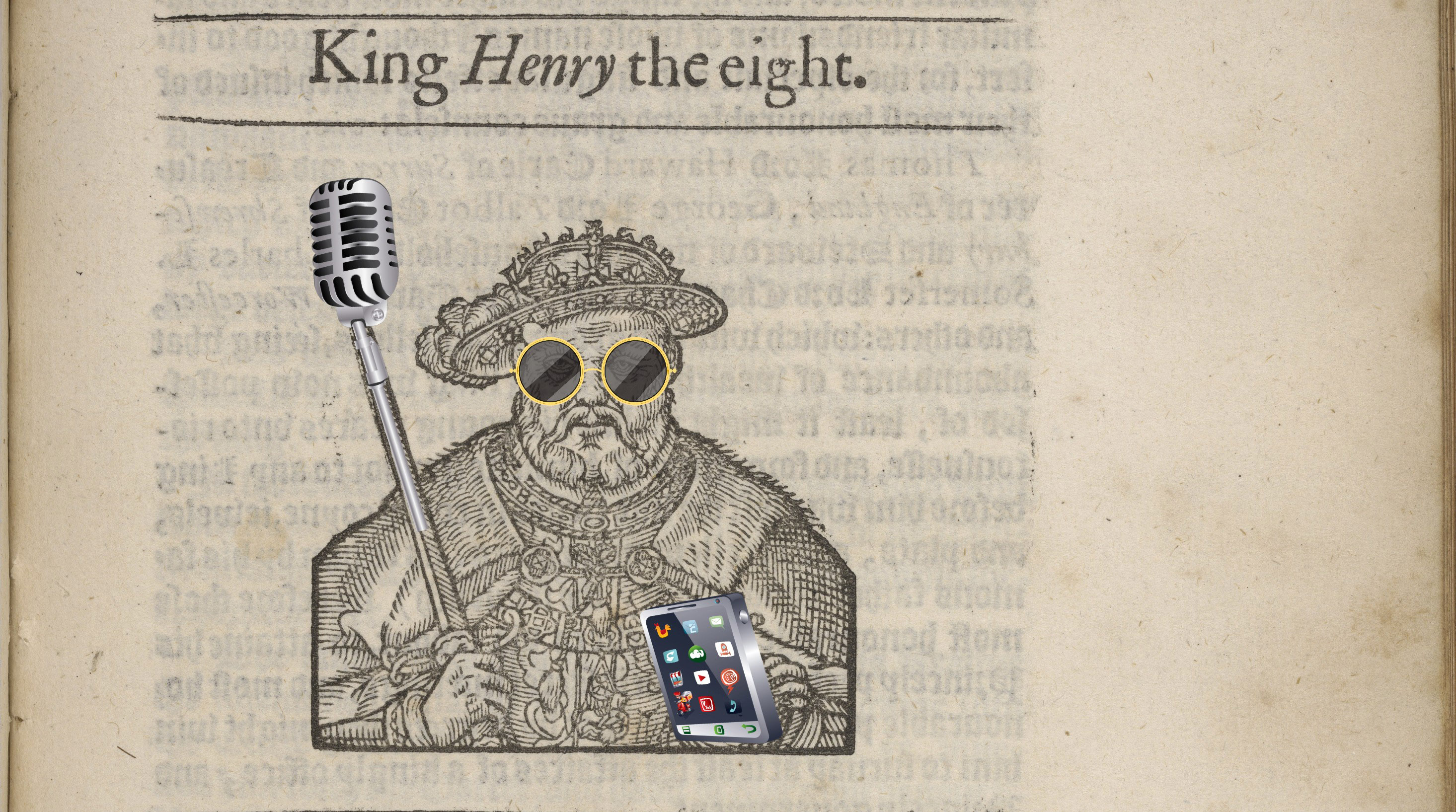 King Henry VIII, his parents, six wives, and four children continue to inspire pop culture. But they are appearing in new arenas and with a new emphasis on diversity. Base image from Robert Fletcher, The nine English worthies . . . (1606), courtesy of the Folger Shakespeare Library

Why does one royal dynasty from early modern Britain still get so much popular attention? The Tudors themselves reigned for only 114 years. But our Tudormania is mighty, playing out in books, radio, television, film, and, increasingly, social media. These are worn-out stories, but enthusiasm for the family that inspired them never seems to wane. Attending to the Tudors can seem classist, reifying history’s long preference for lauding wealthy, well-known people. It can feed religious intolerance in its praise of Protestant ascendancy. It risks being heteronormative, centering on romances, marriages, feuds, and divorces. And it has the potential to focus entirely upon the experiences of white people.

Historians of Britain often bemoan the popularity of the Tudors. This isn’t because we can’t recognize the inherent appeal: the central soapy drama—the marriages, divorces, executions, and political intrigue—is transcendent and a bit escapist. The Tudors have also benefited from their long inclusion in American cultural and educational life. Tudor food, music, costumes, and, of course, literature offer most modern Americans, at a minimum, a sense of vague familiarity with the women and men who were part of this family. For example, Shakespeare lived 39 of his 52 years under Tudor rule, and his plays, full of mystery, mirth, and murder most foul, are products of the period. Historians aren’t immune to this draw. But they worry about how much more there is to give: how can we tell stories about the Tudors that don’t just reassert, over and over again, premodern priorities and assumptions about religion, class, gender, sexuality, and race?

The answer may lie in following pop culture rather than fighting it. When we look at them closely, it becomes clear that the newest Tudor trends have attuned themselves thoughtfully and provocatively to our social and cultural moment. The most recent Tudor brands appeal to the tastes of a more diverse, more savvy range of readers, film and TV audiences, theatergoers, and internet users.

Social media especially has helped keep the Tudors on top. On Twitter, Snapchat, YouTube, Facebook, Instagram, and TikTok, students and teachers, tour guides and interpreters, novelists and history buffs gather to reimagine this royal family in their own ways. They create memes, memorialize significant events, and share breaking news on archaeology and research. And their numbers are staggering: every single Tudor monarch has multiple social media profiles, with the most well-known figures commanding expansive realms online. The Anne Boleyn Files Facebook page has over 172,000 likes, and @KngHnryVIII boasts more than 77,000 followers on Twitter. People who work with the Tudors and their legacy have also become internet sensations. Lucy Worsley, Chief Curator of Historic Royal Palaces, which includes Hampton Court Palace, one of the largest museum spaces devoted to Tudor life, has over 180,000 Twitter followers. Authors and historians such as Tracy Borman, Helen Castor, Lauren Mackay, Hilary Mantel, and Alison Weir have produced a myriad of Tudor-themed podcasts for popular audiences. Taken together, these Tudor influencers have more of an impact than most traditional scholars could ever hope to achieve.

Social media especially has helped keep the Tudors on top.

Before historians succumb to jealousy or defensiveness, it’s worth pausing to consider what the latest Tudor media has to offer. These projects feature more diverse casts, are pitched to audiences of all ages, and provide complex explorations of gender, religious toleration, class, and race. Mary Queen of Scots (2018), starring Saoirse Ronan and Margot Robbie, offered a confident, determined Mary whose Catholic beliefs were celebrated rather than reviled. News that the crew of the Tudor ship Mary Rose included at least one Londoner of North African descent, and details about the lives of his shipmates—most of them lower-status people—made a splash on social media; the ship itself boasts over 21,000 followers on Twitter. Playwrights Toby Marlow and Lucy Moss of Six were self-proclaimed Tudormaniacs, citing Antonia Fraser and Worsley alongside Beyoncé, Miley Cyrus, and Nicki Minaj as key inspirations for their musical. Moss, who studied history at Cambridge, stated that her work on Six was an extension of her interests in “feminist history and revisionist history,” and offered an opportunity to right a “historical wrong” by providing a “different take on [Henry VIII’s] wives.”

And finally, producers of Tudor media—perhaps inspired by theatrical productions such as Lin-Manuel Miranda’s Hamilton—are naming, centering, and demanding the inclusion and recognition of people of color. In the West End production of Six, three of the six leads were actors of color; in Mary Queen of Scots, actors of color were cast as ambassadors, courtiers, and the indomitable Bess of Hardwick (a white Englishwoman in real life). In the Starz television series The Spanish Princess, Stephanie Levi-John delivered a powerful performance as Catalina de Cardonnes, called Lina, an elite Black woman who traveled from Spain to England with Catherine of Aragon in 1501. Defending her decision to make Lina central to the series, co-creator Emma Frost asserted, “You can’t reappropriate history for women and ignore other groups that have been discarded and eliminated. It’s part of the same issue. History isn’t just about white men. Women were there. People of color were there.”

It is true that the increasing presence of actors of color has helped to make the Tudors seem relevant and relatable to broader, more diverse audiences. Whether this is enough is a different, and important, question: race-blind casting has been the subject of intense debate among historians and film critics, who worry the practice might sidestep meaningful engagement with constructions of race and racism. This happened when Hamilton was praised for its diversity in casting but quite rightly criticized for not attending to the Founding Fathers’ participation in or acceptance of enslavement. Tudor-themed films, musicals, and television shows must also grapple with these issues, with diverse casting as just one important step.

But the directors, actors, and fans who love the Tudors have shown themselves to be unafraid to take on these hard conversations by creating spaces for dialogue about social change and racial equity. After the death of George Floyd, Six’s Twitter and Facebook accounts acknowledged that it was “a show that has been seen to champion diversity and empower Black female-identifying voices,” while also being “a show that is largely created and produced by white people . . . Six benefits from the talent and work of our Black cast members and colleagues.” Six claimed that it was their “duty to support Black people always—and not just when it’s trending—as to be silent is to be complicit” and proclaimed solidarity with Black Lives Matter.

Those who love the Tudors have shown themselves to be unafraid to take on these hard conversations.

These calls to action have been taken up by Tudor fans who are examining and reassessing Tudor legacies. Typically mythologized for his role in the victory over the Spanish Armada in 1588, Tudor privateer Sir Francis Drake’s involvement in the forced enslavement and transportation of 1,200 to 1,400 people of African descent has led to calls for the removal of statues and the renaming of schools, roads, and buildings designated in his honor in both the United States and the United Kingdom. Some of the most effective and active protests are being championed by students: at Sir Francis Drake High School in San Anselmo, California, current students and recent alumni sent a petition with over 2,000 signatures to their school board asserting that “‘Sir Francis Drake’ does not symbolize the values, ethics, and integrity we believe should represent the Drake community.” It is no coincidence that this historical reassessment of the Tudors’ involvement in slavery and empire is taking place alongside movements promoting racial and social justice.

That interest in the Tudors, one of the most elite and exhaustively studied dynasties in the white, Western historical tradition, can help to drive social change should make professional historians sit up and take notice. The essential recognition that Black and Brown people were part of the Tudor world is long overdue. So too is the recognition of the work of scholars of color who made the lives of Black and Brown people in the Tudor era more visible—including studies by Imtiaz Habib, Kim Hall, Jennifer Morgan, Onyekia Nubia, and Olivette Otele, among many others—much of which has been underappreciated, uncited, or simply appropriated. Recent calls to make such scholarship more accessible by publishing it in paperback, making it open access, or, at the bare minimum, citing it to give the authors their due, would be important steps in correcting the gross injustices of the Tudor historical record. And historians might look to our colleagues in literary criticism, where the ShakeRace and RaceB4Race communities are changing the field, for examples of how professional study of this time period might be approached.

The Tudors were deeply flawed people. Representations of them in popular culture can be misinformed or can make light of deeply serious topics. But the creators and consumers of Tudormania have opened spaces for us to talk about the injustices of both the past and the present. This is where historians can make a significant difference. We should embrace Tudormania and give it a place in our syllabi and in our conversations. When difficulties in interpretation arise, these moments open avenues for reflection, discussion, education, and critique. Fascination with the Tudors drives students into history classes and into the history major, year after year. Tudor-inspired media that feature diverse, inclusive stories deserve our attention, amplification, and respect. Tudor history is not repeating itself, but remaking itself.

Jessica L. Keene is assistant professor of history at Georgian Court University; she tweets @KeeneOnHistory. Amanda E. Herbert is associate director for fellowships at the Folger Institute of the Folger Shakespeare Library; she tweets @amandaeherbert.