A Threat from the East?

Narratives of Easternness and the COVID-19 Shortage Crisis

Editor’s note: This is the second installment of a two-part column. The first installment can be found here.

Empty shelves, toilet paper shortages, long lines, and desperation in the supermarket: consumer frustrations early in the COVID-19 pandemic inspired commentators throughout the West to invoke the infamous material shortages of the Eastern Bloc. “It feels like a journey back in time to the GDR,” observed a left-leaning German daily as tensions rose in the supermarket aisles of Berlin. In the US, Politico offered shoppers a satirical “Soviet’s Guide to Surviving Coronavirus Shortages,” while right-leaning Fox Business quoted a Soviet-born Houstonian’s sense of déjà vu as she stockpiled groceries. Some pundits decried empty shelves as an anachronistic reversion to consumer experiences of late communist eastern Europe, while others proposed that the recent frustrations of affluent consumers illuminate long-standing deficiencies in the capitalist social contract. The notion that life in the West has succumbed to the consumer conditions from which eastern Europe ostensibly recovered in the 1990s seems to have emerged as an expedient reference for writers attempting to convey the extraordinary, perhaps pivotal, nature of present challenges. 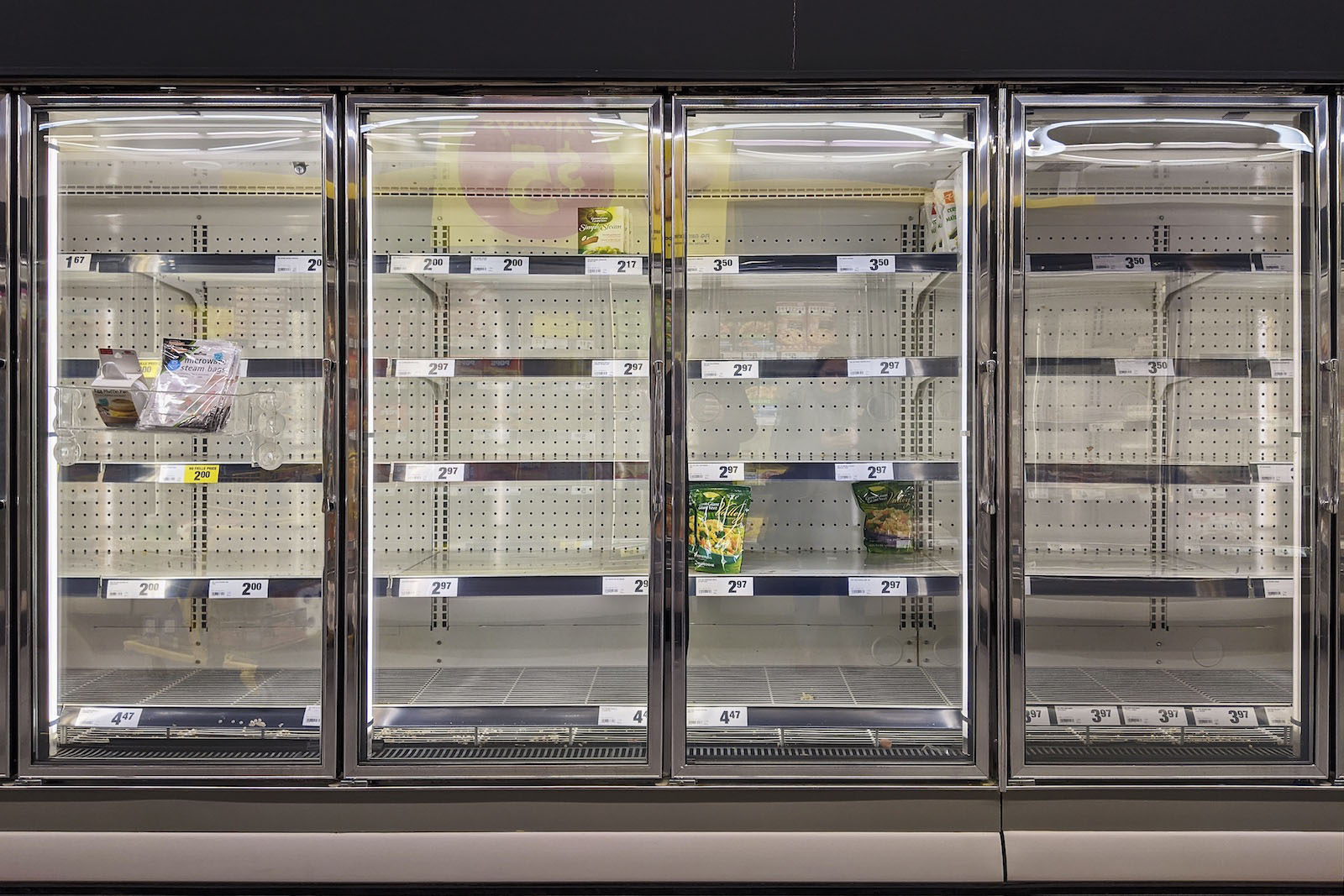 Grocery shortages early in the COVID-19 pandemic inspired commentators throughout the West to invoke the infamous material shortages of the Eastern Bloc. Francis Mariani/Flickr/CC BY-NC-ND 2.0

Historians have likewise drawn comparisons in recent months, arguing that the eastern European past offers insight for the present, exemplifying how supply shortages can ignite demands for systemic change. Rather than parse the specific historical parallels between COVID-19 and shortages in late communism, therefore, we might explore several of the complex historical legacies underpinning this rush to compare today’s pandemic shopping experience to shortages in late communist eastern Europe. What implicit ideas about eastern Europe, the communist period, and the non-West more broadly make such comparisons compelling to readers in the West?

First, what explains why we so frequently connect material shortage to eastern Europe when historical examples of restricted access to food and other groceries in the West are plentiful? COVID-era allusions to the breadlines of the Great Depression or wartime rationing, for example, are less ubiquitous. Nor do many commentators seem to deem the well-documented obstacles that low-income communities face in obtaining fresh and affordable groceries useful comparisons for the experiences of more affluent consumers during COVID-19. What makes the eastern European experience more compelling to well-resourced shoppers in the West than examples, historical or contemporary, of material privation closer to home?

Pundits and commentators who deploy such comparisons take advantage of eastern Europe’s long-standing designation in the Western imagination as an ambiguous “Europe, but not Europe” or what we might call the “almost West.” This has been examined at length by scholars of the region, such as Larry Wolff and Maria Todorova, who build upon the extensive body of critical work analyzing the West’s construction of the “Orient” or “East” as “other.” Scholars cite Western allegations of economic backwardness, alongside cultural primitivism and political instability, as evidence of eastern Europe and its constituent sub-regions’ othering. They argue, however, that the region’s bounded geography, proximity to western Europe, and racial and religious similarities to the West position it as a transitional or intermediary zone between West and East in the Western imagination.

What implicit ideas about eastern Europe make such comparisons compelling to readers in the West?

Many recent comparisons between the COVID-era West and communist-era eastern Europe capitalize upon these narratives. They invoke existing fears that the West could succumb to the fate of its eastern European neighbors, whose historical experiences are sufficiently conceivable as a possibility to frustrated affluent Western consumers while simultaneously alien enough to make the suggestion of comparability disquieting.

Second, why do material shortage and consumer deprivation feature so prominently in Western readers’ minds when it comes to the history of the Eastern Bloc? We rarely see other contemporary problems compared to eastern Europe in the 1980s. Reports of discontinued electricity and rent disputes, for example, almost never inspire comparisons with the power cuts or mass evictions of Ceaușescu’s Romania. Perhaps the only symbol of the communist period that rivals empty shelves for ubiquity in Western discourse is the tapped phone line of the communist surveillance apparatus. How did shortage become, in many Western minds, the quintessential communist-era eastern European experience?

The focus on parallels between the consumer challenges of late communism and that of shoppers during COVID reflects particular anxieties with origins in the era after World War II. In the atmosphere of the Cold War, many politicians, scholars, and others in the West portrayed the communist period as eastern Europe’s deviation from a normal developmental path. Presenting the communist political system as incompatible with economic reform, many positioned economic difference as a defining characteristic of eastern Europe’s differentiation from the West. By contrast, the purportedly “normal” path of the West was increasingly framed around the ability of societies to ensure the satisfaction of middle-class citizens defined more and more by their role as consumers. Many politicians, media commentators, even retailers themselves celebrated how the prosperous postwar West, in particular the United States, prioritized individualist consumerism. In turn, commentators on the left, such as those in the anti-Americanist and environmentalist factions of western Europe, noted certain more sustainable and equitable features of the bloc’s economic system, particularly in the relatively stable 1960s and 1970s, as a desired alternative to the individualist consumer culture of the West.

Pundits invoked an established narrative of Eastern threats to the Western “way of life.”

In the 1980s, widespread material deprivation in communist eastern Europe, an oft-given explanation for the system’s collapse, reinforced this emphasis on the consumer environment of communism. In its coverage of the tumultuous period of protests and political change in 1989 and 1991, American media emphasized empty shelves, food shortages, and “growing consumer discontent,” building upon existing narratives of both economic backwardness in eastern Europe more generally and, more specifically, the purported material anachronisms of communism. Invoking the same focus on material shortage and economic difference that Western media used throughout the Cold War and in 1989, contemporary commentators appeal to the anxieties of affluent readers in the West to convey the pivotal nature of the present moment.

Those who cast recent supply shortages as ominous warnings invoked an established narrative of Eastern threats to certain visions of the purportedly “normal,” Western “way of life.” Those who hope that similarities with the eastern European past illuminate this moment as the beginning of sweeping systemic change also build on narratives of eastern European difference defined in part by economic and consumer conditions. In the tradition of discourse about the threats posed by a varyingly defined, abstract East to life in the West, eastern Europe and, in particular, its consumer history, has played a specific part. Today, it serves COVID-era commentators as a sometimes foreboding, sometimes aspirational, mirror showing what might have been and what might be.

Leah Valtin-Erwin is a PhD candidate in eastern European history at Indiana University Bloomington. She holds a bachelor’s degree in east and central European studies from Hampshire College and a master’s degree in Russian, Eurasian, and east European studies from the University of North Carolina at Chapel Hill. Her dissertation explores the transition from state-run food shops during communism to western European–owned supermarkets after 1989 in Bucharest, Warsaw, and East Berlin. She is interested in the impact of change on everyday life in urban spaces, both historically and in the present.