The majority of undergraduates who started college this fall have never known a world without AIDS, or a world in which being HIV positive was not a chronic but manageable medical condition. Many of them also grew up in the midst of advances for the mainstream gay rights movement that seemed impossible a generation ago. They’ve watched Darren Criss play a gay heartthrob on Glee, listened to Katy Perry sing about kissing a girl (and liking it), and celebrated Laverne Cox as an actress and transgender icon. They also witnessed the end of a ban on military service by openly gay men and women, while state-level prohibitions on same-sex marriage gave way to a Supreme Court decision affirming the right of gay and lesbian couples nationwide to tie the knot. As Ian Lekus wrote in Aeon last year, students today might view the AIDS crisis—when deeply entrenched homophobia and government neglect contributed to the deaths of tens of thousands of Americans—as remote and foreign, like the Salem witch trials or the Progressive Era. 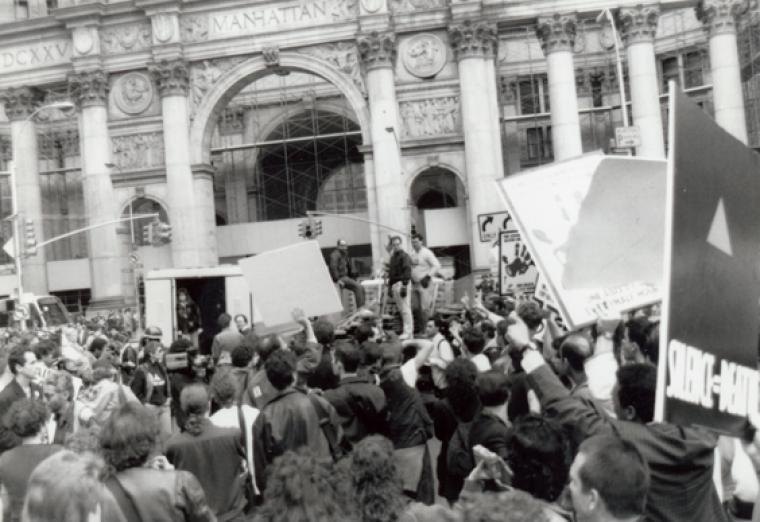 Which is all the more reason we should teach them about it in the US history survey course.

One goal of humanities education is to help students see the world from new perspectives by making the strange familiar and the familiar strange, and teaching HIV/AIDS history does just that. It shows students that activists fought hard to win funding for medical research and HIV-­prevention programs, as well as to make lifesaving medications more widely available. The advances that made life relatively normal for many HIV-positive people, and saved countless others, were not the result of inevitable progress; they happened in part though the activism of people living with the disease. Realizing this helps students understand the contingency of the present day, and that HIV/AIDS—like everything—has a history.

With this in mind, I take students back to a time just before the beginning of the AIDS crisis, when humanity seemed to be making great strides in fighting infectious diseases. Noting the effectiveness of antibiotics and vaccinations, the United States Public Health Service began to shift attention instead toward chronic diseases, such as cancer, beginning in the late 1960s.1 In 1980, just a year before doctors announced the first recognized cases of the new disease, the World Health Organization proclaimed, "Smallpox is dead!" Here I invite students to imagine how that context might make it all the more terrifying to encounter a new, deadly infectious disease.

Learning about AIDS offers an object lesson in historical agency, as it demonstrates how ordinary people resisted a turn toward sexual conservatism after a period of relative openness in the 1970s. Soon after doctors first identified AIDS among gay men in 1981, activists began to think about how to reconcile sexual liberation with a fatal sexually transmitted disease. In 1982, Michael Callen and Richard Berkowitz published a brief pamphlet, “How to Have Sex in an Epidemic,” outlining the principles of what would become known as “safer sex.” This primary source allows students to think about the ways in which some gay men fought a popular discourse that blamed them for the advent of AIDS.

Learning about AIDS history makes this strange world familiar, by connecting the grassroots struggle of AIDS activists to other social movements in US history, from abolitionists and suffragists to the black freedom struggle and student protests of the 1960s and 1970s. Students can draw connections both backward, to material covered earlier in the semester, and forward, to the political issues that animate the country today. Here I emphasize the work of the AIDS Coalition to Unleash Power (ACT UP), whose members reframed a medical issue as an expressly political problem. We watch video of activists like Vito Russo, who compared the struggle against AIDS to living through a war, and the colorful demonstrations that ACT UP staged at the Food and Drug Administration, the National Institutes of Health, and the White House.

Students compare ACT UP’s tactics to other forms of political expression that we have studied throughout the semester. For example, the group’s agitprop poster art recalls the work of New Deal visual artists employed by the Works Progress Administration. More to the point, ACT UP’s protests borrowed from the civil disobedience tactics of the Civil Rights and antiwar movements, which we see activists using again today to call attention to mass incarceration and police brutality in communities of color.

Broader lessons emerge from historical observations. When I solicited anonymous comments following a lesson on AIDS history last spring, one student wrote, “I learned that in order to really make an impact, you must make people uncomfortable.” Another commented, “My first impression was that it was a niche piece of history, but when we started making connections to previously discussed historical events, it became such a necessary piece. Thoroughly enjoyed with a heavy heart watching these protests and interviews, most of which I’d never seen or heard about.”

◆ Michael Callen and Richard Berkowitz, “How to Have Sex in an Epidemic”

◆ Cathy Cohen, The Boundaries of Blackness: AIDS and the Breakdown of Black Politics (1999)

◆ Dagmawi Woubshet, The Calendar of Loss: Race, Sexuality, and Mourning in the Early Era of AIDS (2015)

Connecting the history of AIDS activism to other content is good pedagogy—research in cognitive psychology shows that we learn by connecting new information to what we already know. But learning about the history of HIV/AIDS also gives many students the chance to see the world from the perspective of people unlike themselves. One student wrote, “Honestly, I didn’t care much about the history of gay rights at ALL.” They went on to say that video of an ACT UP protest “really opened my eyes to the struggles people were facing.” By witnessing the experiences of people who lived through the darkest days of the epidemic, students can build empathy with people in the past who were fighting for their lives, and consider how that story resonates with some of the most pressing political issues of today.

But then again, HIV/AIDS is not even past—it is an issue that could directly impact our students’ lives. In fact, our students are among those at greatest risk for HIV, yet many know very little about it. I teach modern US history at Florida International University in Miami, the city with the highest rate of new HIV infections in the country. Other cities with very high rates of HIV transmission, including New York, Atlanta, Baltimore, and Washington, DC, are home to numerous colleges and universities, and thus large student populations. In 2014, youth aged 20 to 24 made up almost 1 in 5 (an estimated 17.8 percent) of new HIV infections in the United States, and many HIV-positive youth do not know that they are living with the virus. The numbers suggest that our students likely know very little about HIV/AIDS, much less its history. Indeed, one student commented, “I honestly had no idea what HIV/AIDS really was.” Others cited the importance of spreading awareness about the disease and its history, especially in college classrooms. With this in mind, I make sure to describe the ways that HIV is transmitted, and how transmission can be prevented.

After all, teaching AIDS history is not just good pedagogy—it might save a student’s life.

Dan Royles is assistant professor of history at Florida International University, where he teaches US, African American, and oral history. His forthcoming book, To Make the Wounded Whole: African American Responses to HIV/AIDS, is under advance contract with the University of North Carolina Press.