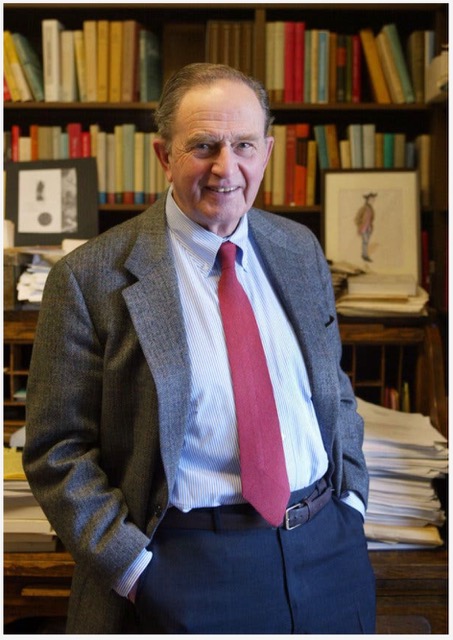 Bernard Bailyn, historian of early America and the Atlantic world, died of congestive heart failure at age 97 on August 7, 2020, at his home in Belmont, Massachusetts. He was Adams University Professor Emeritus and James Duncan Phillips Professor of Early American History Emeritus at Harvard University and served as AHA president in 1981.

Bailyn, widely known as Bud since his childhood, was born in Hartford, Connecticut, in 1922. He attended Williams College before serving in World War II. After the war, he studied for a PhD in history at Harvard, having already identified the themes that would guide his inquiries throughout his career: the intersection of “a distant past and an emerging modernity” during the early modern period in the West; the connections of ideas and reality; and the connections of America and Europe. After earning his degree in 1953, he began his teaching career at Harvard in the School of Education, an experience that led to his path-breaking essay Education in the Forming of American Society (Univ. of North Carolina Press, 1960), which ventured innovatively into family history. His first book, The New England Merchants in the Seventeenth Century (Harvard Univ. Press, 1955), was followed by Massachusetts Shipping, 1697–1714: A Statistical Study (Harvard Univ. Press, 1959), written collaboratively with his wife, Lotte Lazarsfeld Bailyn, a management professor now retired from Massachusetts Institute of Technology.

That such pioneering works of economic and quantitative analysis were followed by his most influential book, The Ideological Origins of the American Revolution (Harvard Univ. Press, 1967), revealed the range of his interests, later confirmed by his biography of Thomas Hutchinson, the last colonial governor of Massachusetts, and by his Peopling of British North America project (Vintage Books), of which the introduction (1988) and two volumes appeared: Voyagers to the West (1986), focusing on migrants from England and Scotland to the American colonies in the 1770s, and The Barbarous Years (2012), on the 17th-century English colonies. These books won awards in abundance: the Pulitzer Prize in History for both Ideological Origins and Voyagers, the Bancroft Prize for Ideological Origins, and the National Book Award for The Ordeal of Thomas Hutchinson (Harvard Univ. Press, 1974). The National Endowment for the Humanities recognized his work with his selection to deliver the Jefferson Lecture in 1998 and the National Humanities Medal in 2010. He published his final book a few months before his death. Illuminating History: A Retrospective of Seven Decades (W. W. Norton, 2020) is an unusual and creative memoir, linking episodes in his life with subjects that intrigued him, such as the will of the wealthy 17th-century merchant Robert Keayne and the idiosyncratic newspaper index created by the middling 18th-century shopkeeper Harbottle Dorr.

After his retirement from teaching in 1993, Bailyn founded the International Seminar on the History of the Atlantic World in 1995. Over the next 15 years, the seminar brought early career scholars to Harvard each August. The seminar helped to encourage the development of Atlantic history, an approach that in many ways has now come to dominate the early American field.

Bernard Bailyn’s influence on the profession and on the practice of history has been profound. In the Harvard history department, he was known for what a colleague termed his “limitless curiosity.” He offered incisive reflections on history and historians in numerous books and essays, including his AHA presidential address, “The Challenge of Modern Historiography.” He was a brilliant and inspiring lecturer to undergraduates and a demanding and generous teacher of graduate students, including myself. His (in)famous questions—“What’s the news?” and “So what?”—pushed us to think beyond the immediate matters that puzzled us to the broader contexts. His comments on his students’ works-in-progress were notable for their succinct, insightful character; one former student whose early chapter draft included laments about his distressing findings was told, “Let the facts speak for themselves,” an admonition that guides him to this day. Long after they finished their degrees, many students continued to turn to him for his helpful advice on professional topics.

Bernard Bailyn is survived by his wife, Lotte, and two sons, Charles, an astrophysicist at Yale University, and John, a linguist at Stony Brook University.