“Dr. Rosinbum, come over here! We’ve got to show you this.” When I walked over, a group of students excitedly showed me a digitized copy of the December 10, 1884, edition of the Daily Morning Astorian. At the bottom of one of its two columns dedicated to news, and immediately following a reprinted travelogue of the Acoma Pueblo, the paper breathlessly reported a new spate of attacks on clergymen. The article, titled “Trial for Heresy,” stated that “(w)hen Old Satan wants to upset a minister’s usefulness he attacks him with a fit of dyspepsia. But Satan’s efforts in this direction can be defeated by the use of Brown’s Iron Bitters.” 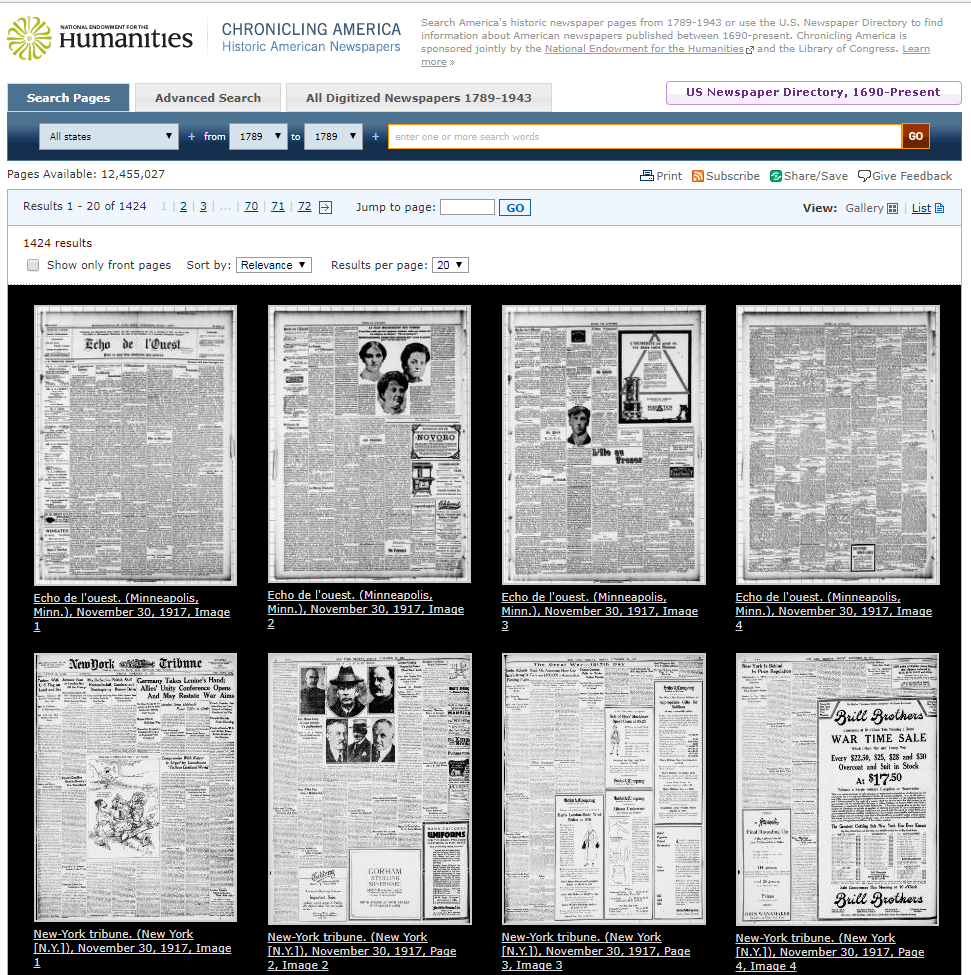 Chronicling America is one digital archive John Rosinbum uses to give his students experience with archival research.

My students found this not only hilarious, but also revealing of the priorities of 19th century newspapers. As they put it, they had just discovered “sponsored content” in the 1880s. While historians have been aware of advertising posing as news in the 19th century at least as far back as the 1980s, the phenomenon was new to my students. The exercise also gave them a taste of the joy of discovery that we historians experience when finding that perfect document in an archive. In the process, they connected the past to the present and found something they thought unique to the 21st century in the 19th.

What made this in-class activity possible was Chronicling America, a rapidly growing digital archive of more than 12 million newspaper pages from 1789 to 1943. The newspaper my students explored was not excerpted in a course reader, on a slide, or in a textbook. Instead, they had to do the work of a historian through digital archival research.

Ideally, all our students would have the tactile joys of shuffling through sheaves of papers at an archive, searching for specific documents that can lead to a discovery or confirmation. Yet the reality is that issues of access related to funding, location, and time make it very difficult for high school and beginning undergraduate students to visit a physical archive. Furthermore, they often do not have the training necessary to conduct research. Digital archives, however, offer possibilities that can help bridge these gaps.

According to Kate Holterhoff, engaging students in digital archives encourages them “to practice critical thinking, writing and communication, and visual and digital design.” I have found that targeted and guided use of digital archives in the classroom can powerfully engage students and introduce them to the joys and frustrations of archival research. These activities can stimulate discussions on data literacy and help them learn how to navigate unfamiliar user interfaces. Finally, they can push them to think about how resource inequity shapes our understanding of the past.

Once I’ve decided to use a digital archive in my classroom, I start by familiarizing myself with its quirks, including its user interface. As I introduce my students to the archive, I use the “I do, we do, you do” method that models both how to navigate the archive and warns them about the frustrations of archival research. Before they start exploring on their own, I give them a clear set of deliverables to work toward. After that, I circulate around the room as students engage the archive either individually or in small groups. (An example of the sort of activity that I would use in the classroom includes this Viral Texts assignment from this series’ March 2017 entry.) Students invariably get frustrated as they try to navigate an unfamiliar user interface, but perseverance teaches them problem solving and new ways of navigating the web.

As students become more familiar with digital archives, they can see firsthand the power of archival research and the ways that availability of texts and documents shapes our understanding of the past. Digital archives also open up interesting conversations about history, memory, and resource inequity. When leading these discussions, I draw heavily from the dialogue that grew around Lara Putnam’s April 2016 article in the American Historical Review, “The Transnational and the Text-Searchable.” How do digitized primary sources impact our understanding of the past? Who has the resources to digitize and maintain archives? What about technological biases (for example, programs’ greater skill at identifying English words as opposed to those from other languages)? These questions allow me to pivot to a broader discussion about archival silences and how record keepers, archivists, and families choose which documents and items to save and which to throw away.

Some of my favorite digital archives that would easily fit into a US history classroom include the host of digitized collections available through the Library of Congress’s American Memory project, the National Archives’ Clifford Berryman political cartoon collection, the Internet Archive’s Way Back Machine, the Census Bureau’s American Fact Finder, and Last Seen: Finding Family after Slavery. A colleague, who taught AP Latin, drew from a number of crowdsourced digital archives to engage students in translation practice on texts ranging from classical texts to graffiti on the streets of Pompeii.

While I primarily ask students to utilize digitized primary sources, other instructors have found remarkable success in engaging students in the actual process of cataloging, archiving, and transcribing. Below are two documents. One is an assignment that asks students to draw from a database to visualize the past, while the other lists a series of crowd transcription projects they can engage in. Also, a series of roundtables at the AHA annual meeting titled “Primary Sources and Historical Profession in the Age of Text Search” will examine the ramifications of digital archives on classroom teaching and historical research. Have your own ideas on using digital archives in the classroom? Let me know in comments below, via Twitter, or let’s meet up at the conference!

Sample Assignment: Visualizing the Past