The Saint Who Sent the Jesuits Packing: A New Translation of an Ethiopian Manuscript Sheds Light on African Women's Anticolonialism

Asked how she came to translate the life story of Walatta Petros, a 17th-century Ethiopian woman saint, Wendy Belcher jokes that the story takes a while to tell. She's right. Just published by Princeton University Press,The Life and Struggles of Our Mother Walatta Petros, written by a monk in 1672, which Belcher co-translated with Michael Kleiner, is the oldest known book-length biography of an African woman by an African author—a book by Africans, for Africans. But the project has great personal significance for Belcher herself.

When she was four, she and her family moved from Seattle to Gondär, Ethiopia, so her father could teach medicine there. "My first memories are of Ethiopia," she says. "One of them is going to a monastery and seeing monks writing on animal skins with little quills. Having grown up there is a big part of my identity." 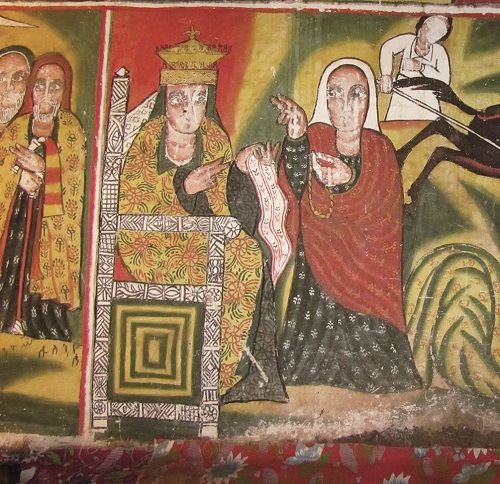 The Habesha peoples of the Ethiopian highlands, among whom she spent three years in early childhood, converted to Christianity in the fourth century, forming the Ethiopian Orthodox Tewahedo church when Orthodox Christianity split from Roman Catholicism after the Council of Chalcedon (AD 451). Adopting monasticism from Egypt, the church's traditions included scribes composing and copying manuscripts in the classical language Ge'ez. Belcher learned to copy hundreds of Ge'ez characters from the gatekeeper at the college where her father taught, though she was too young to acquire formal knowledge of it.

Thirty years later, Belcher was a graduate student at UCLA, writing her dissertation on Samuel Johnson's translation of an account of the Jesuits' failure in Ethiopia. "The Jesuits in the book Johnson was translating blamed their failure on the diabólica mulher—royal women who were so monstrous and evil that the Jesuits could not succeed." Simple misogyny, she thought. "But then I wondered, 'What if it's true?'" According to the Jesuits, Belcher says, "These women are burning down their houses; they're preaching against them." In other words, it must have been Habesha women, not men, who resisted most strongly.

Intrigued, Belcher thought to consult the 17th-century Habesha royal chronicles. But in 2005, she met a scholar of Ge'ez, Qäsis (reverend) Melaku Terefe. "He told me, 'But you should just read their stories,'" Belcher remembers. He said the women who repulsed the Jesuits became saints in the Tewahedo church and that their hagiobiographies (life stories) remained important. These documents provide an African counterpoint to the Jesuits. "And for an Africanist," Belcher says, "having European and African texts from the same period to compare—that's amazing." But none of these women's stories had been translated from Ge'ez to English.

By the time she published her first book (Abyssinia's Samuel Johnson, 2012), Belcher had been hired by Princeton, where she's now associate professor in the Department of Comparative Literature and the Center for African American Studies. With the help of grant money she'd started applying for as a graduate student, she threw herself into the translation of the life of Walatta Petros. In the 30 years after the saint's death in 1642, nuns in her order orally composed her life story, and in 1672 two of them commanded the neophyte Galawdewos to transcribe it. Belcher and Kleiner located a total of 12 manuscripts—in Ethiopia, of course, but also as far afield as Berlin, Paris, and London.

The Life and Struggles of Our Mother Walatta Petros records successful indigenous resistance to the Jesuit incursion, which Belcher argues was an early form of colonialism. In 1612, a charismatic Jesuit named Pedro Páez privately converted the emperor, Susinyos. "Pedro Páez loved Ethiopia," Belcher says. "He was a true scholar. He learned Ge'ez and said to people, 'Look, you can keep your whole faith, you don't have to change anything. We just want to conquer Islam together. Just say that you believe.'" Susinyos publicly professed Roman Catholicism in 1621 and forbade the teaching of Orthodox Christianity.

Walatta Petros was born in 1594 to noble parents and married one of Susinyos's right-hand men, but left him in 1617 to become a nun. Shortly after Susinyos established Catholicism, Páez died and a civil war broke out. Rome replaced him with Afonso Mendes, whom Belcher characterizes as a "hardliner": he opposed Orthodox religious practices descended from the early Christians, which bore a strong resemblance to Judaism. As Belcher explains, "He said to the women, 'All of your children who died in infancy are in hell because they weren't baptized. You have to stop circumcising. You can't have this division between clean and unclean food.'" Proscriptions about childcare and the preparation of food affected the parts of Habesha women's daily lives that intertwined with their religious practice. It's no wonder they resisted.

Though a nun, Walatta Petros was a rebel. She publicly rebuked Susinyos, even though he'd threatened to kill her family. Mendes personally tried to reeducate her, but she held fast. As Belcher writes, "She resisted one of the most persuasive educational institutions ever invented"—the Society of Jesus. Finally, Susinyos exiled her, but her followers gathered around her still. In 1632, the emperor rescinded the edict of conversion, and Walatta Petros became a heroine, eventually founding seven monastic communities. "There was nothing 'nice' about her," Belcher says. "She does not at all remotely fit a Western idea of what a female saint is." At a time of civil war, with daily life rife with danger from disease and hunger, "you're not looking for somebody who is sweet, you're looking for somebody who's powerful. Walatta Petros would lie sometimes to get things done. She asked God to kill people. When other nuns would complain [about the difficulties of asceticism], she was often very unsympathetic, like, 'What did you think we were doing here?'" 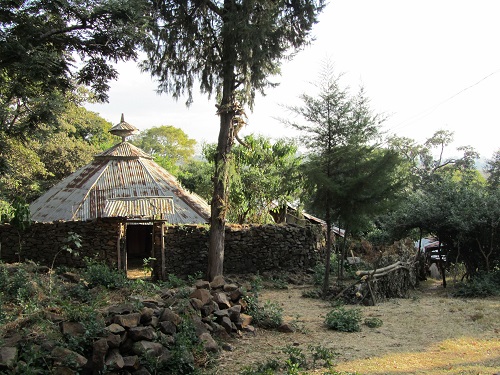 But Walatta Petros didn't do it alone. She deeply loved another nun, Eheta Kristos. According to the text, after they met they "lived together in mutual love, like soul and body. From that day onward, the two did not separate, neither in times of tribulation and persecution nor in those of tranquility, but only in death." To Belcher, the relationship resembles a marriage: Walatta Petros and Eheta Kristos lived together, proselytized together, worshiped together, worked together, and slept together. This idealized relationship—an intensely emotional, physically affectionate, asexual partnership—between holy women is deeply established in Christian tradition. Nonetheless, it can make some uncomfortable. "For most Ethiopians, if they've read the story, they will just say this is typical of women's friendships," says Belcher. "They're very close, they're very physical, they're very intimate—but they're not sexual. The text sets it up as a kind of marriage and they were partners in that way. It's silent about whether they were involved in a sexual relationship."

But there is eroticism between women in The Life and Struggles. Walatta Petros herself reports untoward happenings to the head monk at her monastery. "It was evening and I was sitting in the house, facing the gate, when I saw some young nuns pressing against each other and being lustful with each other, each with a female companion," she tells him. "Therefore, my heart caught fire and I began to argue with God, saying to him, 'Did you put me [here] to show me this?'"

Belcher says "there is no doubt" that the word lustful in the text indicates a level of eroticism surpassing the ordinary demonstrativeness of Habesha women. This is difficult for some people to accept, even though Belcher declines to make the leap to saying that "being lustful" means the nuns were having sex. Some argue that homoeroticism was unknown in Africa before 19th-century European imperialism; others accept that it existed but deny that nuns would ever have that desire. "Some Ethiopians will ask, 'Why do you have to talk about sex at all? It's so typical of you Westerners to sexualize everything.' Which is absolutely true!" Belcher emphasizes. "But I kept on trying not to do it, and it was the only translation that made sense." Walatta Petros's life is "bookended" by two events: meeting Eheta Kristos and seeing the lustful nuns. The first, according to a queer Ethiopian woman Belcher conferred with, "instantiates Walatta Petros as a lover of women"; the second may be interpreted as Walatta Petros confronting the possibility of her own sinfulness. In any case, whether Walatta Petros and Eheta Kristos were sexual partners as contemporary Westerners understand it is the wrong lens through which to view the story. Their intimacy was culturally, historically, and religiously specific.

Belcher believes The Life and Struggles of Our Mother Walatta Petros will appeal not only to Africanists, but also to scholars of medieval history, religious studies, and gender and sexuality. And, she emphasizes, it is accessible to undergraduates. Instructors "shouldn't be intimidated, like, 'Well, I don't know anything about Africa, so I can't teach this.' Just assign the text; it will teach itself," she says, laughing.