Three Perspectives on Simon Schama’s Story of the Jews

Newspapers and magazines in the US and the UK have been publishing a steady stream of glowing reviews of Columbia professor Simon Schama’s book and documentary The Story of the Jews, which aired on PBS in March and April, and which will be released on DVD in May. Schama’s quirky portrayal of Jewish history caught the attention of three professors. 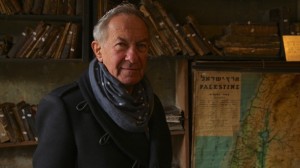 David Cesarani, research professor in history at Royal Holloway, University of London, examines histories composed by Jewish authors, and contextualizes The Story of the Jews within the postmodern writing of Jewish history. From Josephus in the first century CE, to Salo Baron in the 20th century, every attempt at writing a Jewish history comes with an agenda, argues Cesarani. Cesarani does not let us in into what he thinks Schama’s agenda is. He makes a clear case for why the book deserves to be read, but he warns that it should not be considered a comprehensive history of the Jews.

Philip Alexander, professor of post-Biblical Jewish literature at the University of Manchester, finds much to praise in Schama’s history, arguing that the presentation of the creation of Israel and its existence is balanced. He also finds much to critique. Alexander focuses his blog post on Zionist and anti-Zionist views of the documentary. He does not take sides—his position is that the documentary should be a starting point for discussion.

More critical of the book and documentary is Marc Saperstein, professor emeritus of Jewish history at George Washington University, professor of Jewish studies at King’s College London, and professor of Jewish history and homiletics at Leo Baeck College. Saperstein identifies flaws and inconsistencies within the text and sometimes finds Schama’s tone inappropriate (for example, his description of Maimonides as “a consummate moaner, a king of the kvetch”).

PBS invites high-school students to think about history through Schama’s lens, as stories tied together, and tying people together. Its essay contest for high-school students asks: “What stories have impacted your life? How do these stories influence how you see yourself and the world? How do they tie you to your community?” The contest closes on June 15 and winners will be announced in August.

An excerpt of The Story of the Jews is on the NPR website, and a trailer of the documentary, which will be released on DVD this month, is here.