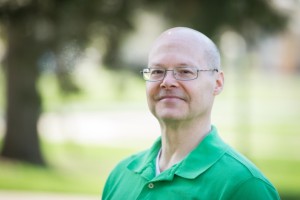 Laurence W. Marvin is a professor of history at Berry College located in Mt. Berry, Georgia. He lives in Rome, Georgia, and has been a member since 1993.

I can’t remember exactly, but ever since I was very young, perhaps four or five years old. I started off interested in the American Civil War, but have gone far afield from that. The one consistency I’ve exhibited is an interest in hierarchy and institutions, hence no surprise that I’m a military historian among other things.

Article and book project on military command during the long 12th century. I’m deliberately being vague, though, because I never like to discuss things I’m working on but haven’t completed.

Probably the biggest shift was a geographical one, from the Anglo-Norman world and Capetian France to Occitania. My dissertation mostly concerned the northern French world, while the monograph I eventually wrote was mostly concerned with what is now southern France. I remain quite interested in the Crusades, albeit from the Western perspective. Overall my interest in the general region (western Europe) and era of the Crusades (12th and 13th centuries) has remained the same.

Working at a small college means I’ve had to embrace many different teaching interests. I am the only historian at Berry College who specializes in an era prior to 1600. Therefore I teach a long chronology of courses from the classical period through the Reformation, and a course on history and film. This wide teaching focus has made me a better historian by forcing me to consider many approaches to history that otherwise I might miss. It has also allowed me to make connections between eras and places lost to those who have the luxury of staying within their own narrower chronological, geographical, or topical specialty.

Book: Judith Bennett’s Ale, Beer, and Brewsters in England: Women’s Work in a Changing World, 1300-1600. This book is not really in my field and its subject is not an academic interest of mine, precisely why I mention it. It’s an exceptional example of what I love about the study of history: it’s a well-crafted analysis that succeeds on multiple levels. Bennett attempts to show both what changed over time, and what did not. What could be more simple yet elegant than that? It’s scholarly but engagingly written, even-handed and persuasive in argument and evidence. She made a subject outside my interests both compelling and pleasurable to read. It’s the right length to keep a student’s attention, but her voice and tone would work for any audience. This book stands as an archetype of what good scholarship and history writing can be.

Movie: The farther one goes back in time, the harder it seems for filmmakers to make a good film about that time. Medieval or ancient depictions typically end up as epic battles, witch hunts, and ham-fisted acting. The medieval period is particularly not well served by film makers. So I recommend The Warlord starring Charlton Heston and Richard Boone with a disclaimer: lots of the film is silly and factually non-existent. Yet what I like about it is that the last one third portrays a siege of a stone tower. It’s not epic, but that’s what makes it so good: it depicts what must have played out thousands of times between the year 1000 and 1300: a small-scale action and warfare at the local level. It’s not a battle upon which the fate of civilization hinges but simply where one side wants in to retrieve something while the other side tries to keep them out. Overall the film doesn’t beat one over the head with spectacle, but just tells a small story.

Perhaps this applies to the humanities in general, but I value the autonomy and independence I have as a professor. I’ve always chafed under authority, and academia is one of the few places where someone who prefers working alone with no one to account to besides his/her own conscience can do just that. What I like specifically about the history profession is the lack of deep intellectual divides that sometimes hobble other disciplines. While historians vary wildly in their approaches and subject matter, a well-argued analysis or exciting narrative works regardless of the subject. Finally, I cherish the historian’s primary conveyance of their ideas: the single-authored book length monograph. There’s nothing like a well-written book reflecting one person’s sustained argument and extended interpretation of the evidence.

I did so once I became ABD. At that point I thought I might have a future in the profession, so joining the AHA was an important step towards committing to the discipline as a professional. I saw it as analogous to joining the AMA for physicians.

I am a lover of books and reading, but that’s not too removed from academic history. Besides that I go to the gym a lot.

I hope the AHA will continue to throw its weight behind ensuring fair treatment of adjuncts and contingent faculty as well as fighting the erosion of tenure-track positions and tenure in American higher education. Most graduate students realize sooner or later that the job market is uncertain in the best of times and they take a leap of faith spending years getting a PhD hoping they’ll end up with a tenure-track job. That leap of faith seems to get longer and longer, and as the chasm widens it has severe consequences for the study of history and our profession. A scholar’s best work is less likely to emerge when they lack a steady paycheck or regular employment. Uncertain conditions for instructors ultimately punish students too, because the best instructors are those who hold students to high expectations and standards without fear of loss of employment. Tenure allows professors to pursue topics for their own sake, teach controversial things without retribution, and give grades based on what students actually earn. We know this already, of course, but the wider world often fails to recognize it. I think the AHA can help spread the word.