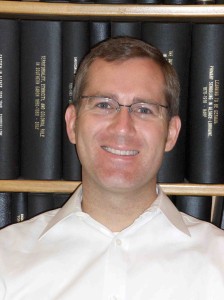 Jason McGraw is an assistant professor of history at Indiana University. He lives in Bloomington, Indiana, and has been a member since 2004.

Shamefully, I did not read much literature as a child. I did, however, spend years poring over our family’s World Book Encyclopedia set (1975 ed.), particularly the maps and entries on countries. The same went for a gigantic illustrated history of the Second World War. In high school in Dallas, Texas, my mentor was Dr. Carole Buchanan, who received her PhD in African history (coincidentally from Indiana University, where I teach). She inspired me to go to graduate school.

I just received page proofs for my book, The Work of Recognition: Caribbean Colombia and the Postemancipation Struggle for Citizenship (University of North Carolina Press, 2014). The book argues that slave emancipation in 1852 came to be meaningful not only to the people who left bondage but to all Colombians. I examine the political, social, literary, and religious consequences created by the problem of how to reconcile emancipation-inspired universal rights and belonging with the particular freedom struggles of African-descended people.

This summer I am jumping in to my next book project, on the making of Jamaican popular music from the 1940s to the 1970s, which was shaped by cultural nationalism in Jamaica and the growing internationalization of Jamaican life. And need I say it? Bob Marley.

Yes and no. I have become more globally—and interdisciplinary—minded, in part due to teaching. Otherwise, I am still animated to ask the same kinds of questions as before.

Jefferson Cowie’s Stayin’ Alive: The 1970s and the Last Days of the Working Class and Rebecca Solnit and Rebecca Snedeker’s Unfathomable City: A New Orleans Atlas are brilliant and engrossing books. As far as blogs: Yo Is This Racist?

The possibility and sometimes the reality of history’s big tent. Working with smart people who study so many parts of the world using different approaches and based on so much accumulated knowledge. I learn a lot from my colleagues.

It was part of my professionalization. After joining for this more practical reason, I began to feel that being a member connected me—in an affective way, thanks in no small part to Perspectives on History and the American Historical Review—to the larger project of doing history.

I took my infant son to the 2007 Atlanta meeting. I have to admit he fell asleep during some of the panels, but I, at least, thought they were interesting!

I am an avid birdwatcher.

I look forward to the historical profession in the United States, and the AHA in particular, becoming increasingly diverse in many ways over the coming years.