Notes Toward a History of Isolation

Since the outbreak of COVID-19, quarantine has remade the nature of social ties, labor, and politics around the trauma of contagion. In March 2020, isolation via social distancing became ironically a shared experience, a collective loneliness of disrupted routines and relationships. While some feigned entrepreneurial fervor, many have likely experienced quarantine as an anxious monotony, alone without escape. As the pandemic has dragged on in the United States for a year, the boredom of the early quarantine has largely given way to modes of being alone together: a nation of individuals and closed small groups, both networked and isolated by design, anxiously looking over our shoulders as we careen toward an uncertain future. Now a year into the pandemic, we—whatever “we” means here—are in the thick of solitude. But this is the anxious isolation of the bunker rather than the retreat of the monastery. 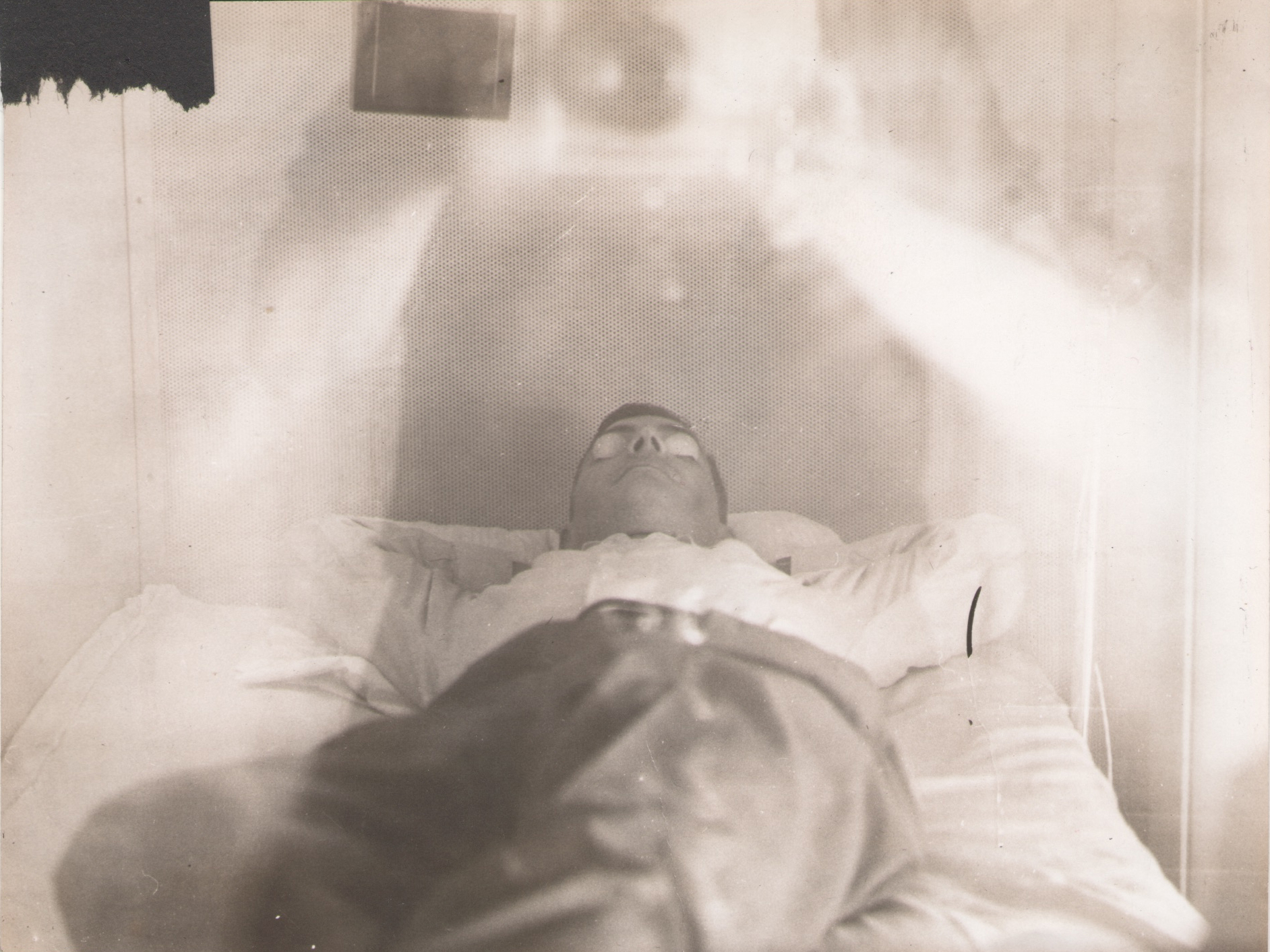 In a 1957 isolation study, psychologist Robert R. Holt demonstrated an experimental apparatus devised by graduate student Leo Goldberger. who used ping-pong balls cut in half to cover the subject's eyes and further the sensory deprivation. But as the reflected image of the photographer makes clear, the subject was never truly alone. Collection of Robert R. Holt, courtesy of the Holt family

Being alone, of course, has a history. Indeed, even setting aside the history of medical quarantine, one might point to medieval hermeticism or Henry David Thoreau’s insistence on solitude’s ecstatic revery as antecedents for social distancing. Contemporary concerns over the psychological effects of loneliness and isolation are steeped in Cold War–era military science and cultural anxieties. Both military planners and scientists imagined high-technological modern warfare, conducted at a distance in remote territories, as a form of militarized solitude. Loneliness was a unique threat to the distinctly Cold War virtue of vigilance: anticipatory dread, watchfulness for the impending disaster of nuclear war. A genealogy of isolation as a constellation of affects—monotony, boredom, worry, and loneliness—can show how contemporary concerns fit within Cold War cultural formations.

Consider the speleologist Michel Siffre. In 1962, Siffre descended some 100 meters into darkness to reach the subterranean cavern of Scarasson, deep beneath the Alps. Pitching a small nylon tent atop a glacier, Siffre remained in this abyss for two months, subjecting himself to the effects of isolation, low temperatures, and thin atmospheric pressure—both as a physiological experiment and a bid for publicity. Settling into his frozen solitude, Siffre declared Scarasson a refuge from society, writing in his book Beyond Time, “I told myself, ‘I am free!’ . . . I was no longer a slave, either to men and their social habits or to the effect of the rotation of the earth on its axis.” However, as days became weeks, boredom and monotony sank in. Despondent and alone, Siffre read philosopher Henri Bergson by the light of his gas lamp and listened to American jazz records on a hand-cranked turntable, anxiously awaiting the end of his confinement.

Siffre is perhaps best understood not as a cave diver with a philosophical bent but as a prototype for the American soldier, alone in hostile conditions. The American pursuit of a high-technological strategy made far-flung and exotic geographies—the Arctic, the deep sea, outer space—into new terrains for warfare. Alone in the Canadian wilderness, radar operators along the Distant Early Warning Line watched for the earliest signs of nuclear attack, bathed in the green glow of the radar screen. Both the military and the popular press imagined the boredom and monotony that accompanied solitary duty not only as a threat to the psyche of these individual soldiers but to the nation itself. Newly dominant on the world stage, the United States was thought to be only as strong as the vigilance of its soldiers in isolation.

As days became weeks, boredom and monotony sank in.

Accordingly, psychologists and psychiatrists across North America made laboratory hermits out of research subjects in a scientific vogue for isolation and sensory deprivation. Scientists seemed endlessly creative in pursuit of an objective form of isolation, a platonic ideal of solitude. Subjects were confined for days through a wide variety of apparatuses, ranging from opaque goggles and sound-canceling headphones—used to create an environment with sense limitations—to tanks in which subjects were immersed in dark, lukewarm water for hours, to five- by eight-foot rooms that replicated a more recognizable prison cell. Exiting the apparatus, experimental subjects, having been categorically “stimulus starved,” were subjected to a battery of psychological tests. Alarmingly, many subjects seemed malleable after their ordeal, their wills easily bent. In one experiment at McGill University, subjects were played recordings of a speech describing the virtues of everyday telepathy. Previously skeptical subjects rated the believability of these recordings exponentially higher after several days of isolation. Indeed, one subject reported later attempting to use ESP to cheat at poker. Such effects were dramatic, confirming scientists’ hypothesis about the role of isolation and solitary confinement in what was darkly referred to as “attitude change.”

Beyond their applications in understanding the psychological risks of remote terrains of warfare, these experiments were flash points in popular and scientific imaginaries of “brainwashing,” responding to the intense scandal that followed the defection of a number of American soldiers captured by Communist forces during the Korean War, most of whom had spent weeks in solitary confinement. These captured soldiers were alternately portrayed as effete traitors or the unfortunate subjects of sophisticated methods of indoctrination. This brainwashing scandal proved to be a catalyst within the American human sciences. Intelligence agencies fueled public anxiety, funding journalists to write exposés of alleged sinister communist tactics, and directed research within psychology and psychiatry toward the development of parallel means of indoctrination. Often funded indirectly by the CIA, research on isolation furthered the development of scientific means of solitary confinement, new techniques of indoctrination to be used against enemy combatants. Indeed, CIA interrogation manuals from this period cite this research heavily, indicating that this line of research directly shaped ethically dubious intelligence practices. Experiments in isolation explored the depths of boredom endemic to American hegemony while producing new and dangerous forms of weaponized solitude.

For Siffre in his cavern, isolation might have promised the highest freedom; for prisoners of war, it was likely the lowest form of confinement. Perhaps unexpectedly, this collision of freedom and confinement was most prominent in the burgeoning space program. The freedom of escaping the bounds of the Earth, it was feared, would be undone by the debilitatingly monotonous cocoon of the space capsule. Leaving Scarasson and blinking in the sunlight, Siffre found himself the object of intense scrutiny by aerospace physiologists from the US Air Force’s School of Aerospace Medicine (SAM), who translated, mimeographed, and distributed Siffre’s meticulously kept journal as ad-hoc scientific evidence. Scientists at SAM had conducted parallel laboratory experiments of their own since 1956, in anticipation of NASA’s Project Mercury and the launch of solo astronauts into space. They sequestered Air Force personnel alone in a simulated space cabin for seven days at a time, an effort to catalog and mitigate the effects of isolation and boredom on astronauts’ vigilance. In the suffocating solitude of space, scientists feared that astronauts might make grave errors in judgment, experience alarming hallucinations, or even develop schizophrenia. Siffre’s experience provided a model for what prolonged isolation in the hostile environment of space might look like.

For Siffre, isolation might have promised the highest freedom; for prisoners of war, it was likely the lowest form of confinement.

The analogy between Siffre’s cave and a spaceship was just one of many made by aerospace physiologists attempting to understand the nature of isolation. More ominously, scientists drew further explicit analogies between potential astronauts in space and prisoners of war in solitary confinement. One physiologist wrote that the combination of unpredictable “danger” and “severe social and emotional isolation and confinement” rendered the conditions experienced by the prisoner of war “near ‘space equivalent.’” Accordingly, scientific experts on the confinement of prisoners of war were frequent consultants on SAM’s space cabin simulator, making strange bedfellows of aerospace physiologists and CIA-funded psychiatrists. Indeed, throughout the 1960s, prospective astronauts were routinely subjected to isolation and sensory deprivation as part of a battery of medical and psychological examinations. While it’s unlikely that indoctrination was among NASA’s aims—at least, explicitly—astronauts perceived isolation as a test to be passed, an opportunity to demonstrate American fortitude in the face of adversity. Unlike lapsed soldiers captured during the Korean War, the astronaut must, as the popular press put it, “excel in loneliness.”

Alone and cocooned against the hostile environment of the early pandemic, I found myself often thinking of Siffre—an icon of isolation that illustrates both its utopian and dismal forms. If the underbelly of the Alps was a staging ground for an experiment in isolation, so too was my apartment in New York. Indeed, for the radar operator scanning for nuclear attack, the prisoner in solitary confinement, the astronaut attuned toward the future battlefield of space, and for Siffre himself, isolation was interwoven with a ceaseless dread, an apocalypse not yet arrived and yet unending—a prospect hardly unfamiliar in our contemporary moment.

Now a year into the pandemic, we are perhaps seeing the effects of isolation on a scale unimaginable to mid-century scientists: a world wounded not only by COVID, but by a solitary anxiety lodged between individual and population. At the time of this writing, vaccines have begun to trickle out, leaving me to wonder: What new and likely diminished horizon is coming into view as we collectively exit our own Alpine caves?

Editor's Note: The photo of Robert R. Holt was originally identified as demonstrating an experimental apparatus of his own design. The apparatus was devised by graduate student Leo Goldberger. The author regrets the error.

Jeffrey Mathias is the 2020–21 NASA/AHA Fellow in the History of Space Technology and a PhD candidate in science and technology studies at Cornell University. He tweets @cheffmathias.