Reinvigorating FRUS: The Historian’s Office at the State Department and the Foreign Relations Series 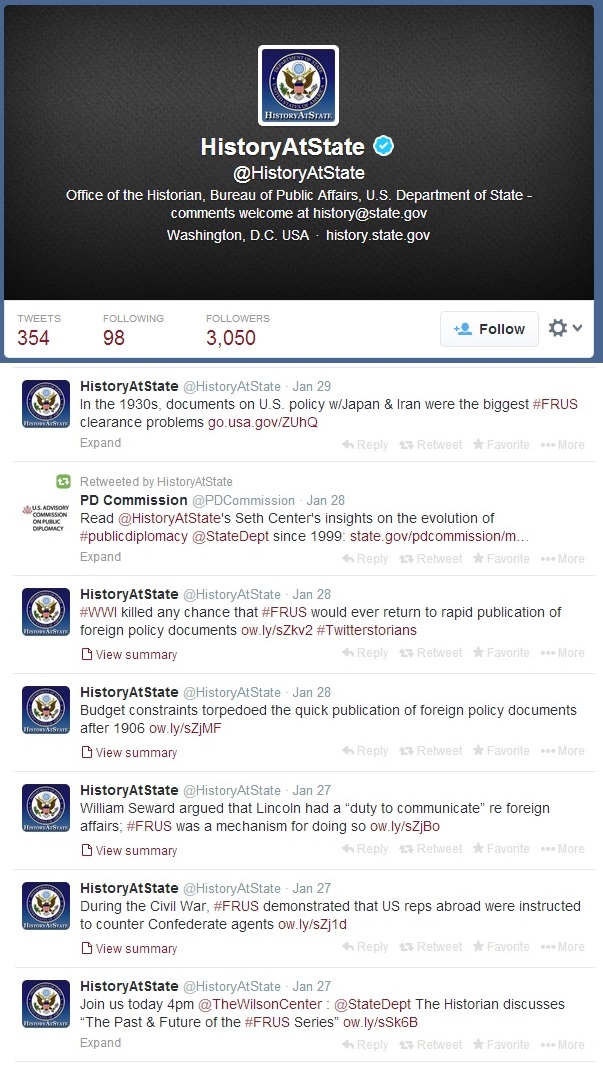 In January 2009, the Office of the Historian at the US Department of State was in disarray. It had lost a significant number of its veteran staff, members of its advisory committee had been dismissed or had publicly resigned, and its chief was under investigation by a panel appointed by the outgoing Secretary of State, Condoleeza Rice. Its misfortunes won mention in the New Yorker and on Public Radio International’s The World. Scholars voiced realistic concerns about the fate of its primary product, the Foreign Relations of the United States series.

Five years later, the office has a large, experienced, and enthusiastic staff; a robust advisory committee that has turned its energies toward largely external issues such as declassification; and a leader who identified bottlenecks impeding the timely production of FRUS volumes and developed a plan for the series and the office’s other products that is, in his words, “coherent, comprehensive, and executable.”

On January 27, the Washington History Seminar welcomed Stephen P. Randolph, the historian of the US Department of State, and three chairs of the Advisory Committee on Historical Diplomatic Documentation (better known as the Historical Advisory Committee, or HAC) for a discussion of the past and future of the FRUS series. More than 70 individuals attended, a record for the seminar.

Randolph, a career air force officer and pilot with a history doctorate from George Washington University, joined the State Department in 2011 and has held the position of historian since 2012. He traced the history of the series and the role it plays, both nationally and internationally, as the “gold standard” of document collections produced by governmental agencies. Though the series began in 1861 as a means of letting Congress know about diplomatic maneuvers surrounding the beginning of the Civil War, it grew out of a conviction dating to the earliest years of the republic that the executive branch “owed the people a record of what it was doing.”

For the first 50 years of the series, FRUS volumes were produced in the year immediately after the events they chronicled. After the turn of the century, printing costs necessitated a more relaxed schedule, and when World War I “engulfed” the State Department, production slowed further. In 1925, historian Tyler Dennett set editorial standards still in use today. These were threatened in the early 1950s, when a fierce controversy erupted over what should be included in a volume on the Yalta Conference, which brought together Franklin Roosevelt, Winston Churchill, and Josef Stalin. (For a fascinating account of this battle, see the Office of the Historian’s website, history.state.gov.)

The debates made the department realize that State Department documents alone could not adequately represent such a complex event. A full accounting required material not only from across the US government, but from foreign governments as well. The most pressing conflicts, however, were not among political partisans, but between the two essential imperatives of the series: timeliness and comprehensiveness. Compiling a full and complete record took time—often so much time that volumes lacked utility for the historians and diplomats who had become the key constituencies of the series. Efforts to speed the process failed.

In 1991, prompted by historians’ complaints, Congress passed the FRUS statute (as it came to be known), which generally reconfirmed the standards Dennett had promulgated. FRUS would remain a “thorough, accurate, and reliable documentary record of major United States foreign policy decisions and major United States diplomatic activity.” It would include not only material demonstrating why a course of action was taken, but documents that would reveal “alternative views to the policy position ultimately established.” Provisions in the statute required that volumes in the series be published within the 30 years following the events they recorded and established the HAC as an external body of scholars to advise State Department staff in developing the series. And the statute stipulated that “all Federal agencies engaged in foreign policy” cooperate with the department in providing the material necessary to create the full picture the FRUS series is intended to present. Randolph called it “a really good law,” because it provided the series “stability and resilience,” “scope, scale, and growth potential,” and “disciplined trade-offs” between the opposing goals of comprehensiveness and timeliness.

It also put in place declassification procedures, but timely clearance of classified material continues to be problematic. One issue has been that some agencies refuse even to acknowledge that certain covert activities ever took place. In response, in the late 1990s a High Level Panel involving representatives from the State Department, the National Security Council, and the CIA was created to attempt to resolve such problems.

The flexibility allowed by the statute played a key role in the Office of the Historian’s recovery from its problems, as did the intervention of the HAC, which had developed a strong tradition of guidance and advocacy for the office as well as for FRUS. Current HAC chair Richard Immerman of Temple University said the transformation of the office began under Ambassador Edward Brynn, who as acting historian in 2011 hired Randolph as permanent general editor of the series and pushed for his promotion. Under Randolph and his successor as general editor, Adam Howard, a survivor of the office’s earlier crisis, the office has revamped the process for reviewing volumes, put in place a new declassification system, and overhauled other aspects of producing the series. Randolph analyzed the production process for points where unnecessary delays were occurring. Most important, Immerman said, “Steve went out and hired editors.”

“It’s a far different office than it was before,” he added, “a terrific group of historians, and a large group of historians with a tremendous sense of energy.” Randolph also identified the ability to hire a full staff as a crucial element in bringing the office back from the brink. “One of the miracles that has happened is that we are now staffed and structured to meet the mandate,” he said. Immerman and Randolph both identified the increasing importance of intelligence in foreign affairs in the past 30 years as a major challenge, and one the FRUS statute did not foresee. Another is how to treat and present material that was “born digital” and electronic communications such as teleconferences.

Immerman noted that declassification delays involving the intelligence agencies continue to plague FRUS, despite the presence of the High Level Panel. Randolph said one of the many roles of the series has been to serve as a sort of “icebreaker” to push the intelligence agencies and other departments to review and release material that has been frozen in the declassification process. The hiring of a historian who works jointly for State and the CIA has proven helpful in this regard.

Past HAC chair Warren Kimball of Rutgers University chaired the 2009 investigative panel. He also noted progress, but argued for what he calls "access guides," free-standing finding aids that would provide the "earliest, easiest and fullest possible public access to the actions of government." Randolph explained that there currently are no plans to produce such guides. Limited resources mean that doing so would require eliminating the detailed note on sources and extensive annotation that are now included in each volume, he explained. Wm. Roger Louis of the University of Texas at Austin resigned his HAC chairmanship in 2008 to draw attention to the dire situation. He expressed concern about the future of the print version of FRUS in a digital age. Randolph confirmed that the print version will continue, but said that the digital versions make documents available to those without access to research libraries. “If you can get to the Internet, you can get to the series,” he said.

Currently the Office of the Historian’s staff is at work on 71 separate FRUS volumes in various stages of preparation, and the office also continues to work on making its website more useful to scholars, diplomats, and the general public. “Retro-digitization” is a priority, with a goal of eventually making all 450-plus volumes in the series available electronically. The office maintains an active presence on social media, including Twitter and Tumblr.