An Unlikely Database: Using the Internet Creatively in Historical Research

Earlier this year I was at the library on the University of Maryland campus to pick up a book that had just arrived through Interlibrary Loan (ILL). I had learned of the book about a month before and was excited to see it—it was a catalog of patriotic covers (envelopes) printed in the North during the Civil War. My PhD research focuses on meanings of loyalty and disloyalty in the wartime Union, and these covers are wonderful examples of material culture that provide insight into how many Northerners understood what it meant to be faithful to the Constitution and the Union. With slogans like "Death to Traitors," portraits of President James Buchanan above the title "Judas," or depictions of Confederate President Jefferson Davis approaching the gallows, these envelopes reveal the marketability of concepts like treason and loyalty, while giving a good indication of where "patriotic" Northerners stood on the subject. 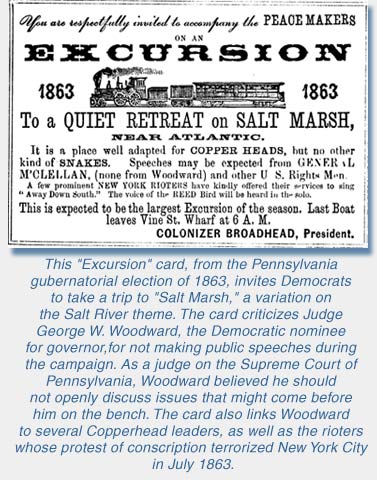 As I was leaving the circulation desk, I saw a professor of mine. I told him about the book and how I intended to use it in my dissertation. When he asked how I had come across the book and the idea to incorporate these visual images into my work, I sheepishly replied that I had stumbled across the title on eBay. During these early stages of working on my dissertation, I have been doing regular searches on eBay for item descriptions that include terms like "loyal," "treason," "Civil War," and "1860s." One of these searches turned up an auction for an envelope that featured the seal of the state of Pennsylvania, Liberty as a goddess, an eagle, a Union shield, and the motto "Pennsylvania: Loyal to the Union." In the item description was a reference to a book, The Catalog of Union Civil War Patriotic Covers, by William R. Weiss Jr., which is a comprehensive listing of thousands of these envelopes. So I looked up the book on WorldCat, placed a request through ILL, and a few weeks later had it in my hands.

Initially I felt a pang of shame for admitting how I had discovered this book. Online auctions and "relic" collecting all too often seem the province of amateur historians, Civil War buffs, reenactors, and popular readers—not of published, university-trained PhD students. But after a little reflection, I decided I ought to share my auction-research exploits with the community of scholars. After all, what I have found so tremendously helpful might also prove useful to other scholars as well.

I have been an eBay user since my sophomore year of college. My eBay user ID, gen.mcdowell, reveals where my interests were at the time: Major General Irvin McDowell, a Union commander during the American Civil War. Since that time my focus has remained in the Civil War era, but has moved from military aspects of the war into the political arena. Now I search for items related to Congress, the courts, political parties, and President Lincoln. My research interests are more academic than antiquarian. Nevertheless, my love affair with eBay has persisted, and I have found in the online auction an unprecedented research tool that has led me to some valuable primary and secondary sources.

Aside from the catalog of patriotic covers, I have located a number of other books and pamphlets from the Civil War era that I would never have found through basic searches on library catalog systems. I have also come across a few manuscripts (letters, diaries, and so on), broadside advertisements, and photographic images that I have purchased and will incorporate into my future historical work. The benefit of purchasing images and other pieces of material culture may be that when I eventually publish my dissertation, I will already own the rights to most of the illustrations I want to use (this may not be the case for scholars who work in more recent eras, though it is generally true for 19th-century historians like myself). Owning my own copies of photographs from the 1860s, for example, will save me tremendous reproduction and use costs as well as the administrative red tape that so often accompanies reproducing images held by private libraries and archival repositories.

The main reason eBay and other online stores (such as bookfinder.com or the Advanced Book Exchange) work so well as "research databases" or "finding aids" is the wide-ranging scope of their "collections." Sellers on eBay are entrepreneurial junk collectors who travel the planet picking up items at garage sales, flea markets, warehouses, barn sales, and estate auctions. Rare, unique, and uncataloged books; ephemera; and other items of historical interest constantly surface through this process, giving scholars a unique opportunity to consult or use items that they otherwise would never have discovered even after spending months searching through a multitude of library catalogs. Online auctions thus become a unique "library" or "catalog" for the use not only of collectors, but of scholars as well.

In part, the thrill of research comes from the discovery of an unexpected document after months of searching in all of the wrong places. Research is often serendipitous; it is chaotic, it is a winding path whereby scholars make their way through the piles of evidence they have unearthed. Each of us can remember times when a small lead or hunch turned into our first book or article, or the central theme of a dissertation or project. Web sites like eBay provide a forum for such random, fortuitous adventures to take place. My discovery of patriotic covers eventually led me to broaden my searches for "Copperhead"-related items as well (Copperheads were what Republicans called Democrats during the Civil War). I recently found an entire collection of handbills from the presidential election of 1864—items I had never before seen. One in particular accused the Democratic candidate of associating himself with "all Turncoat Misguided Politicians, Copperheads, Union Splitters, Sons of Liberty, Traitors, Deserters, Canada Raiders, Escaped Rebel Prisoners, and all who have sympathy with the devoted 'Armistice Party.'" Mentioning several prominent Democrats, this small piece of paper said as much about how northerners understood treason and disloyalty as nearly any other document I have turned up in two years of research on the subject. I bid on the item up to $86 but, alas, on a graduate student budget, other bills seemed a little more pressing. Nevertheless, I now have the information I need either to search for the item in various libraries or to contact the winning bidder and ask his permission to reprint the item when it comes to publishing my dissertation. I have contacted other winning bidders in the past, asking for photocopies of their spoils, and they have almost always graciously complied.

In a sense, eBay has democratized the hobby of collecting. In the past only wealthy individuals who could travel the world, visit prestigious auction houses, and spend large sums of money could build impressive, specialized collections (of whatever interested them). Today ordinary Americans with access to the Internet and a credit card can build even more impressive and specialized collections. In the same way, these online "search engines" have opened up a world of information to scholars. The trouble is that these "catalogs" have unstable, chaotic databases. The average eBay auction last for only seven days. That means a search performed one week may turn up completely different results every other time it is performed. But that can only add to the thrill of the chase and the benefits of the hunt. With an ever-changing "library collection," the eBay "database" offers a dynamic catalog to scholars who are patiently and persistently willing to wade through it.

Scholars using online sites like eBay for historical research, of course, must be cautious. Aside from the fact that some listed items may be fraudulent or may have been stolen, items are also often misidentified or incorrectly listed. The provenance of an item is also rarely known. Nevertheless, as online databases (ProQuest, American Memory, JSTOR, etc.) become increasingly useful to scholars, historians would do well to take the skills they have learned using the databases intended for their use, and applying them to other "databases" that might be equally useful, though initially intended for other purposes.

—Jonathan W. White is a PhD student in history at the University of Maryland at College Park. His dissertation, "'To Aid Their Rebel Friends': Treason, Loyalty and Nationalism in the Civil War North," examines Northerners' conceptions of loyalty, disloyalty, and treason as they waged a war for national existence. He has published articles in Civil War History, American Nineteenth Century History, and the Pennsylvania Magazine of History and Biography. He would like to thank Bernard Cooperman, professor of history at the University of Maryland, for offering valuable criticism and advice on this essay.