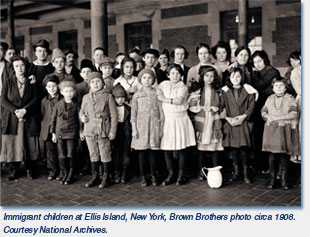 I spent this morning watching 25 people become American. Yes, I realize that we historians figured out a long time ago that becoming American is a process, fraught with conflict. But these 25 people, hailing from 21 nations across six continents, were caught up in the moment. Here they were, in the rotunda of the National Archives, with the Constitution, Declaration of Independence, and Bill of Rights in display cases forming the backdrop to the proceedings. The audience was rather small: their relatives, a few National Archives employees, court officials, and guests of the Archives, including two historians. Royce Lamberth, the chief judge of the district court of the District of Columbia, administered the oath of allegiance and less than an hour after the deputy U.S. Marshall opened the court in its special location, 25 men and women had become new citizens of the United States.

Historians tend to downplay these kinds of ceremonies, except to parse their cultural meanings, often reaching for the most subtle readings of text and context. And many of these new citizens might well have also pondered various aspects of the ceremony, from the presentation of the colors by military honor guard to the standard opening and closing of the court by the elderly gentleman who clearly relished his role as its clerk.

Judge Lamberth had done this before. He enjoys it, he told us beforehand. His sense from conversations with the participants is that the ceremony is extremely meaningful to them, and allowing for the likelihood that they could be telling a distinguished public official what he wants to hear, I am inclined to believe him.

What does this have to do with the practice of historical work?

First, I think back to my column last month, which lamented what happens when a state adopts a textbook not written by a historian and without any historians participating in the review process. The AHA needs to encourage historians to take part in these sorts of activities, and needs to exert pressure on relevant agencies to consult historians when historical expertise is necessary to a decision. This is part of my larger sense that public culture would benefit from the voices of historians, from an understanding that historical knowledge relates to a set of standards established by a discipline.

The other side of this coin involves historians listening more closely to public discourse. And on the question of citizenship, I’m guessing that humanists in general have been too inclined to let appealing theoretical arguments overshadow the voices of the men and women whose lives we study. In this age of global culture and transnational historical analysis, our scholarship has perhaps been too quick to dismiss the meaning of citizenship to the millions of Americans who over the years have valued not only its material benefits, but its meaning.

Second, I am reminded as to the significance of a particular historical publication, one that we do not think much about. It is actually a set of web-based materials, also available in print form, gathered under the title Study Materials for the Civics Test, created by the U.S. Citizenship and Immigration Services (for details, follow the links at www.uscis.gov/citizenshiptest). These are the materials that prospective citizens use to prepare for the required test, whose 100 civics questions include a significant history component. The questions are often straightforward and not quite what most scholars would ask: “Who wrote the Declaration of Independence?”; “Who was the President during World War I?” But many are interpretive: “Why did the colonists fight the British?”; Name one problem that led to the Civil War.”

Why does this matter? It’s the numbers. As of September 2010, approximately one-half million people had been naturalized as American citizens in this calendar year. It is not unreasonable to guess that most of these individuals prepared for the test by reading the materials provided by USCIS. Even those of us who have written textbooks, popular biographies, or reference books that look good on a coffee table, have not seen these kinds of numbers. Here is a set of historical publications that reaches 500,000 people in a single year. And few of us have ever even heard of it.