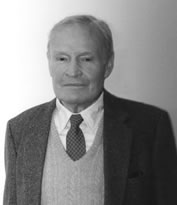 Sidney A. Burrell, professor emeritus and former chairman of the history department at Boston University, died on June 15, 2003, at the age of 86. Born in Choteau, Montana, in 1917 to a family of modest circumstances, he moved to Chicago as a boy and attended its public schools. Although he received a scholarship to attend DePauw University, financial constraints during the depression compelled him to transfer to the University of Chicago, where he completed his BA in 1938 and immediately began graduate work in history. Among his teachers during his first year in graduate school was the British economic historian, R. H. Tawney, a visiting professor at the University of Chicago during 1939. Burrell's studies were interrupted by the coming of World War II: he enlisted in the Navy, serving in the Pacific theater from 1942 to 1945 aboard a specialty ship, an experience that shaped him, as it did so many of his generation. When the war ended, he taught for one year at the U.S. Naval Academy before resuming graduate work at Columbia University, under the supervision of Robert Livingston Schuyler, receiving his PhD in modern European history in 1953. He had already begun teaching at Barnard College, where he remained a charismatic teacher of women undergraduates from 1950 to 1966, apart from a year as a research fellow at the Woodrow Wilson School of International Affairs at Princeton.

In 1966 Burrell was recruited to become only the fourth chairman of the history department at Boston University since Warren O. Ault established it in 1913. During the twelve and a half years that he led the department, he transformed it from a small, mainly service department with few renowned scholars into one with an international reputation, scholarly visibility, and an excellent publishing, fellowship, and award record, including several Guggenheims, a Pulitzer, and a Bancroft. During his first nine years as chairman, Burrell was able to oversee the hiring of 20 new faculty members, 12 of them coming to the university with tenure. Such was the confidence of the administration in his entrepreneurial gifts and vision for the department, although relations with top administrators became acrimonious in later years, bringing his chairmanship to an end in 1979.

What made Burrell so admirable a chairman was his managerial and personal style. He eschewed distinctions of rank, running the department in democratic fashion with junior faculty playing as full a role in its operations as more senior professors, a characteristic far less common in the 1960s than it was later to become. He genuinely enjoyed the company of his colleagues and valued their professional accomplishments—even to the point of carrying around favorable reviews of their recent publications. He knew how to mentor younger members of the department, fostering their careers, reassuring them about tenure prospects, and protecting them from recurrent budget cuts. Those of us privileged to join the department in those early years encountered an extraordinary cohesion and sense of collective loyalty. He reveled in being chairman and proved an exemplary leader capable of inspiring abiding affection from his colleagues.

An outstanding teacher whether in his courses on 17th-century England or Irish history or in his survey of historical thought, he was able to develop a rapport with students at any level, making them feel that he was genuinely interested in them. He received Boston University's highest award, the Metcalf Cup and Prize for excellence in teaching in 1981, a year before his official retirement in 1982, but continued to teach part time in the department for several more years. Even after he moved to a retirement community in his 80s, he organized an informal seminar program for the residents and continued to lead discussion groups on current affairs. Burrell found his metier in teaching and administration, but he was able to bring some scholarly work to completion as well. In addition to several seminal articles on the Scottish reformation, published in the 1950s, he co-authored (with Karl W. Deutsch) Political Community and the North Atlantic Area (1957, 1968). He edited several pedagogic works, including The Role of Religion in Modern European History (1964), Handbook of Modern European History since 1500 (1965, 1972), and Handbook of Western Civilization (1965, 1972). He also edited and compiled the modern British history section of the American Historical Association's New Guide to Historical Literature (1961).

Burrell was a Guggenheim Fellow in 1961–62 and president of the New England Historical Association in 1972–73. His wife, the former Ann Gibbons, to whom he was married for more than 50 years, predeceased him. He is survived by his three sons and six grandchildren.