Venetian prostitutes, Victorian mothers, and Armenian captives. All of these women are featured in the AHR Forum “Gendered Bodies, Mediated Lives: New Directions in Women’s History,” which constitutes a large part of the February 2018 issue of the American Historical Review.

Regular readers of the journal will know that from time to time we publish a collation of interlinked articles, accompanied by an introductory essay or closing comment (see December’s “Follow the Money”). Quite often, this AHR Forum does not come to us prepackaged as a single submission, but is editorially conjured by combining separately submitted but clearly related articles. This may be serendipitous, but it also reflects our faith that in this era of increasingly unbundled academic publishing, the single-volume journal aiming to be more than the sum of its parts still has an important place. To put it differently, in the age of the downloadable single, we still like to produce LPs or concept albums when we can.

In the February 2018 issue, we bring together three articles that came to us independently, yet address in some fashion the role of affect or feeling in mediating gendered social relations. At first glance, these pieces may strike readers as quite disparate. Joanne M. Ferraro (San Diego State Univ.), in “Making a Living: The Sex Trade in Early Modern Venice,” examines how women in the 18th-century republican city participated in sex work to advance their economic fortunes and social autonomy. Drawing on women’s testimony before the deliciously named “tribunal of the Executors Against Blasphemy,” Ferraro argues that Venetian prostitution remained deeply embedded in the city-state’s economic life and household organization. The crucial breakthrough here is that Ferraro’s evidence allows her to recount this tale from the perspective of the women themselves, rather than through the eyes of their moralizing interlocutors.

Speaking of moralizing interlocutors, Victorian-era mothers in Britain faced plenty of those as well. In “The Emotions of Motherhood: Love, Culture, and Poverty in Victorian Britain,” Emma Griffin (Univ. of East Anglia) mines hundreds of autobiographies to consider the emotional terrain of maternal love. Griffin contends that historicizing differential norms surrounding motherhood can alert the historian to a wide range of gendered emotional experiences. Her account of the not always happy relationships between parents and children offers us a glimpse into the “emotional regime” of working-class Victorian motherhood. But her article also casts light on the methodological challenges of charting interior lives that may be indiscernible to us even in the present, let alone in the past.

The final article in the forum, by Rebecca Jinks (Univ. of London), revisits a topic treated by Keith Watenpaugh in the pages of the AHR eight years ago: the humanitarian efforts to “rescue” Armenian women forcibly incorporated into Turkish, Kurdish, and Bedouin households in the aftermath of the 1915 genocide on the Anatolian peninsula. While that earlier article charted a transition to modern universalist forms of humanitarianism, Jinks’s “‘Marks Hard to Erase’: The Troubled Reclamation of ‘Absorbed’ Armenian Women, 1919–1927” focuses on the ambivalences generated by debates about the relative “recuperability” of these women, as measured by the tattoos that bore witness to their experience of captivity.

Here the affective relations between female relief workers and the women they sought to “save” were co-determined by corporeal marks that identified the latter as potentially unworthy investments in relief organizations’ project of national reconstruction. Through the lens of gender, Jinks concludes that modern humanitarianism continues to bear this classificatory habit of distinguishing those worthy of rescue from those rendered unredeemable by their ordeal. As her richly illustrated article suggests, visual representations of those in need served as tokens of worthiness and thus offer a way into this historical narrative.

Of course, the risk in conjoining scholarship that comes to us under separate cover is that the articles at hand remain only tangentially connected. We assigned Jocelyn Olcott (Duke Univ.) the task of drawing the work of Ferraro, Griffin, and Jinks into a common frame. A scholar of 20th-century Latin American women’s history, Olcott offers a comment on the three essays rooted in European history from a perspective honed by a very different historiographic tradition and set of preoccupations in women’s history. Olcott observes that these histories of “domesticity and affect,” while derived from distinctive national and social contexts, together call attention to the permeability between public and private realms of women’s lives. Moreover, while they draw on very different kinds of sources—legal proceedings, personal narratives, and visual representations—Olcott reminds us that all three articles keep women in the forefront of the action.

The forum is followed by a very different kind of article, “The Spine of American Law: Digital Text Analysis and U.S. Legal Practice,” by Kellen Funk (Princeton Univ.) and Lincoln A. Mullen (George Mason Univ.). If the articles in the forum rely on traditional methodologies to ask new questions, Funk and Mullen apply the tools of digital text analysis to wrest new meaning from old sources. Digitization makes possible macro-analysis of 38,000 pages of 19th-century US civil procedure statutes scattered across multiple jurisdictions, but based on a code adapted from statutes originally codified in New York. The patterns that are revealed, they contend, show how creditors’ legal remedies against debtors reflected a shift from the rhythms of agriculture toward those of emergent merchant capitalism in the wake of the American Civil War. This shift, in turn, helped unite the southern and western states against legal procedures emanating from the heart of American financial power. This essay in the legal history of financial remedies might be read in conjunction with, and as a follow-up to, the forum on financial history in the December 2017 issue.

It is just this sort of cross-disciplinary historiographic mix that the AHR seems best positioned to promote. Not every issue of the AHR contains a forum, but we do carefully construct each issue to ensure that it reflects a variety of fields, methods, and chronologies of potential interest to a wide array of historians. Our hope is that any scholar who opens the issue—or looks at the home page in search of an article—will always find something of tangential interest. Our profession contains many worlds, and the journal of the AHA should bring them together, rather than contribute to their balkanization.

Finally, recent books by Max Bergholz, Daniel Magaziner, Charles Maier, and Kim Priemel receive extended consideration in our Featured Reviews section. Here, too, readers will find a wide variety of topics on offer that can be read fruitfully together: territoriality in world history, nationalism and violence in the Balkans, the Nuremberg trials, and artistic training under South African apartheid. Future issues of the AHR will expand these types of reviews beyond current monographs to classics in the field, museums, films, documentary collections, and even historical fiction. 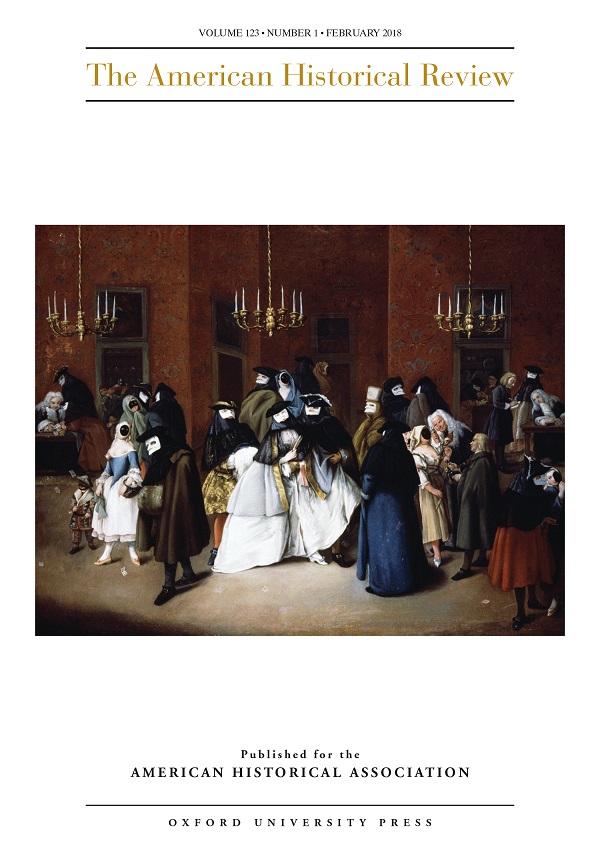 Pietro Longhi, The Ridotto of Venice, c. 1750. Oil on canvas, 55 x 72 cm. Photo by De Agostini/Getty Images. The Ridotto, a wing of Venice’s Palazzo Dandolo at San Moisè, was established in 1638 as a government-owned gambling house. There, noblemen and women of various social ranks mingled in disguise, engaging in amorous flirtations and pursuing their desires. In Longhi’s rendition, a gentleman lifts a gentlewoman’s dress, and a less elaborately dressed woman exposes her bosom for male admirers. Such gambling houses, an important part of Venice’s new entertainment attractions during the 17th and 18th centuries, facilitated the expansion of the commodification of sex, offering the anonymity that state-regulated brothels could not provide. In “Making a Living: The Sex Trade in Early Modern Venice,” Joanne M. Ferraro moves the gendered analysis of sex work in an economic direction by focusing on how the market in sexual intimacy provided women as well as men with disposable income, economic value, and agency.