A Difficult Past: Interpreting Slavery at Presidential Plantations 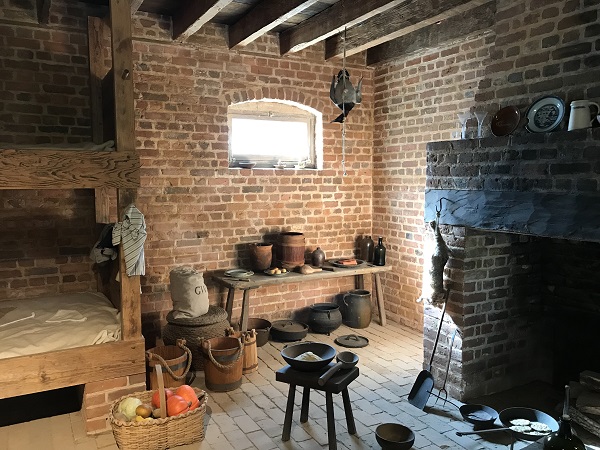 In 2016, excavations at Highland—the Charlottesville, Virginia, home of President James Monroe—led to a discovery that would completely reshape interpretation of the site. Historians believed that a small house, still standing on the property, had been part of the main residence, most of which had burned down. But archaeologists, looking at what was revealed in the digging, identified the foundation of Monroe’s main residence. Highland staff realized that the smaller house was a guest house, built around 1818, by Peter Mallory and George, two carpenters enslaved by Monroe.

Each year, presidential plantations attract hundreds of thousands of visitors. People come to learn about the lives of the founding generation and to admire historic architecture and artifacts. But as places that were also working plantations, they can open conversations with the public about the role of slavery in the nation’s history. In the last 30 years, presidential plantation sites, according to Sara Bon-Harper, executive director of Highland, have made great strides in “presenting the narratives of slavery” to visitors. To tell these stories, the sites have lately turned to archaeology and to communities descended from the enslaved who lived and labored there.

As the panelists demonstrated, each of these mansions has its own history of interpreting slavery. Mount Vernon, for example, has been doing it at least since 1929, when the Mount Vernon Ladies Association planted a memorial stone to mark the slave cemetery near Washington’s tomb. Even before that, said Douglas Bradburn, Mount Vernon’s president and CEO, the plantation hired people who were once enslaved there to work as interpreters. In the 1980s, Monticello began informing the public about the enslaved people who lived there, with the first tours discussing slavery following in the 1990s. Montpelier began reckoning with slavery through archaeological work in 2000.

Interpreting slavery poses difficulties for historic sites. Since most enslaved people could not read or write, there are few documentary records or personal accounts of plantation life from their perspectives. Interpreters must convey the complexities of how slavery worked at each site, as well as each president’s views about it, in the time of a house tour. The majority of visitors to these sites are white, and many have specific expectations about the history they will encounter there, making for another challenge for interpreters. As Brandon Dillard, manager of special programs at Monticello, put it: “When you’re having a conversation at Monticello about how great Thomas Jefferson was as the guy who invented America, it’s pretty hard to then move into a conversation about slavery.”

“We all stand united in knowing the presidents we interpret could not have achieved what they achieved without slavery.”

Presidential plantations have been able to get at the history of slavery at their sites by collaborating with descendant communities. In Highland’s case, a descendant of a family enslaved by Monroe contacted the site after hearing of the newly discovered main residence foundations. Since then, Highland staff have been able to connect with other descendants. Bon-Harper hopes that this community will collaborate with Highland both as “informants about their families and oral histories” and as “advisers and participants” in future decisions.

While Highland is early in its work with descendant communities, other presidential plantations have been engaged in this work for much longer. In 1999, Rebecca Gilmore Coleman informed Montpelier staff that a decrepit cabin across from the main gate was built by her great-grandfather, formerly enslaved by Madison, and asked for it to be restored. This marked the beginning of a relationship between Montpelier and the descendant community. In “Returning the Landscape of Slavery to Presidential Plantations,” Elizabeth Chew, Montpelier’s vice president of museum programs, described how the site’s current exhibition—The Mere Distinction of Colour—emerged from relationships with descendants, who requested that it emphasize the “humanity of their ancestors” and not “leave slavery in the past.” A result of 20 years of archaeological and historical research, the exhibit features listening stations where visitors can hear “descendants tell the stories of their ancestors,” in the words of Christian Cotz, Montpelier’s director of education and visitor engagement.

Archaeology has also been crucial to each site. Gary Sandling, vice president of visitor programs and services at Monticello, said that “for historic sites . . . archaeology plays as much of a, if not a more important, role in the ability to communicate and interpret slavery as the documentary record.” Projects include a continuing archaeological survey of the slave cemetery at Mount Vernon to determine burial sites and other details. Monticello has conducted long-standing efforts to restore buildings where enslaved people lived and worked, now including the South Wing and South Pavilion, which had been converted to public restrooms in the mid-20th century. The discovery of the base of a stove in one building has been particularly influential. Its foundations will be left exposed, Dillard said, facilitating discussions about James Hemings, a chef enslaved by Thomas Jefferson. According to Sandling, much of the motivation to restore and reinterpret these structures comes from the need to address a criticism many African American visitors to Monticello raise: “You’ve erased where we were.”

But most visitors at presidential plantations are white and come to the mansions expecting to find an untainted celebration of the president in question. Sandling noted that “Wasn’t Thomas Jefferson a good master?” was the most common question interpreters received on tours at Monticello. In an interview with Perspectives, Highland guide Martin Violette listed questions he often hears: How many slaves did Monroe own? How did he treat them? No matter the question, Violette said, the underlying concern is often the same: “How could our founding fathers, who created a country based on individual freedom, own slaves?”

The majority of visitors to these sites are white, and many have specific expectations about the history they will encounter there.

To help visitors confront these questions, guides at Monticello start their house tour with slavery, discussing Sally Hemings and identifying Thomas Jefferson as the father of her children. According to Nancy Stetz, education programs manager at Highland, tour guides there are required to mention slavery in a “national context” but also to refer to specific enslaved persons by name. The site also offers a “Slavery at Highland” drop-in station, where visitors can discuss slavery with interpreters.

Staff also ensure that the story of slavery is not extracted from the greater history of the plantation or the president associated with it. Bon-Harper said that a “central tenet” of the work on slavery at Highland is that the “lives of the enslaved and their contributions are discussed in the same set of narratives as those about Monroe.” Jessie MacLeod, associate curator at Mount Vernon, similarly hopes that visitors leave the current exhibition at the site—Lives Bound Together: Slavery at George Washington’s Mount Vernon—understanding that “slavery is deeply embedded in the story of Mount Vernon and George Washington’s life” and that it is impossible to understand Mount Vernon or that period in American history “without examining the impact of slavery and the contributions of enslaved people.”

As such, one important goal at the presidential plantations has been to emphasize the individuality and humanity of the slaves. Lives Bound Together, MacLeod told Perspectives, is the first full-scale exhibition on slavery at Mount Vernon. The “growing dialogue of slavery in our nation’s founding,” she said, made this the right time to take advantage of Mount Vernon’s wealth of documentary and material evidence to contribute to the conversation. The exhibition highlights 19 enslaved individuals, and interactive screens allow visitors to learn about each of their lives at Mount Vernon, their families (if records exist), and, via maps, the places where they lived and worked.

Presidential plantations continue to add to their interpretations of slavery. An upcoming augmented reality tour at Highland will allow visitors to see representations of enslaved people conversing on the landscape. According to Sandling, Monticello is planning to develop “contemplative spaces,” recognizing that the story of slavery can be a traumatic experience for some visitors. As each presidential site continues its efforts to interpret slavery, through collaboration with descendant communities and archaeology, each also stays committed to telling these stories humanely. Capturing a sentiment underlying the presentations at the annual meeting, Stetz emphasized, “We all stand united in knowing the presidents we interpret could not have achieved what they achieved without slavery.”