THEMAS Is WWRN: Why STEM Students Need an H

Should we be concerned that there’s no h in STEM? That history is missing out on the shift in student interest in recent years toward scientific and technical fields? I think so, and in this little essay I shall attempt to demonstrate why and how history can add value to the curricula followed by students majoring in mathematics, engineering, chemistry, and comp sci.

Acronyms such as STEM seem to have become more common lately, perhaps because of the popularity of texting and the rise of so-called SMS language. Some acronyms are obscure to all but the cognoscenti, but others, like the acronym BRIC, make it into the mainstream. Ever since Jim O’Neill, then at Goldman Sachs, came up with the term in 2001 to refer to Brazil, Russia, India, and China, then all rapidly growing, the economic world has been saddled with that acronym, to which a number of analogous acronyms have since been added, albeit to less fanfare. Thus, we find that other economies have been grouped as the MISTs (Mexico, Indonesia, South Korea, and Turkey), MINTs (Mexico, Indonesia, Nigeria, and Turkey), and PIGS (Portugal, Italy/Ireland, Greece, and Spain).

It’s easy to see why acronyms arise and have staying power. They are useful as mnemonics, are often clever, and, yes, in today’s world, they can help people keep within their allotted 160-character limits when text messaging and 140-character limits when tweeting. Sometimes acronyms can also punctuate a point. A great example of such punctuation, from the world of public health: the field widely known as WaSH, standing for water, sanitation, and hygiene.

Over the course of the past decade or so, everyone in the world of teaching, whether in K–12 or in higher education, has become familiar, perhaps too familiar, with one particular acronym: STEM. This acronym—which stands, of course, for science, technology, engineering, and math—seems to have originated in internal National Science Foundation
documents in the early 1990s, but began to be used widely at the beginning of the next decade. Since its public debut, the acronym has become increasingly widespread and, more often than not, has been used as a prod, if not a bludgeon, to get American educators and students to focus more on individual disciplines under the STEM umbrella and over time even to embrace an integrated STEM curriculum. Why? Perhaps in part because of what might be called “the joy of STEM,” but mainly for more instrumental purposes relating to workforce development and the enhancement of our global competitiveness.

Even as committed STEMers became more and more successful in promoting their agenda, some brave and creative insiders, especially one named Georgette Yakman, began to push for a broader approach that Yakman called STEAM (Science, Technology, Engineering, the Arts, and Math). She believed that incorporating the arts and design into the mix would at once enhance the STEM curriculum, improve pedagogy, contribute to workforce development, and allow students to have more fun. Yakman’s STEAM-powered K–12 curriculum has gathered a lot of traction worldwide over the last five or six years, and others—most notably John Maeda, graphic designer and former president of the Rhode Island School of Design—have successfully extended the STEAM concept into curricular design in higher education. 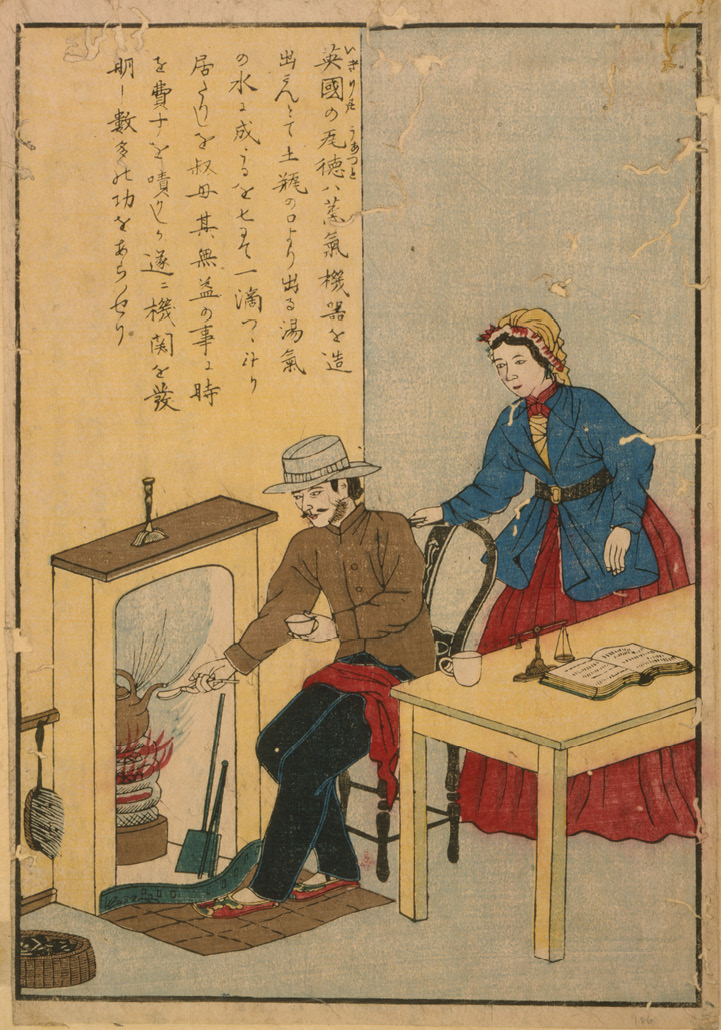 Lessons of history for STEM students, from a set of prints likely produced by the Japanese Department of Education, 1873. Here, James Watt does research for his steam engine, persevering even as his aunt berates him for his folly. Read more at the Public Domain Review: bit.ly/1nlqWqJ.

If the emphasis on STEM was, on balance, a salutary development, and if powering over to STEAM was a better development still, the historian in me would like to push us a bit further and to incorporate my own discipline, history, into the curricular reform remix. Try as I might, though, I can’t seem to extend the STEM-STEAM chain via an appropriate acronymic link, so I’m rearranging the letters and calling for an approach called THEMAS (Technology, History, Engineering, Math, the Arts, and Science). In this approach, time and context matter, and historical processes and patterns are analyzed and factored into STEMy-STEAMy thinking, providing the opportunity for students to self-consciously and explicitly consider “lessons learned” from the past. Here, one can do no better than to invoke Mark Twain, who (supposedly) pointed out that “history doesn’t repeat itself, but it does rhyme.”

To cut to the chase: the STEM/STEAM disciplines obviously all have disciplinary histories and are all embedded in bigger historical plots, and it is intellectually unjustifiable, pedagogically unwise, and in the long run probably economically inefficient to attempt either to STEM global competition or to STEAM ahead without knowing whence you came. As proponents of path dependence—the idea that choices are limited by past decisions—have long argued, history matters, often a lot, and its significance and potential to add value, including instrumental value, are not to be pooh-poohed or ignored.

Even “mere” disciplinary history has something to offer those studying STEM. Wouldn’t STEM students benefit from knowing about the mathematical contributions of George Boole and Évariste Galois? Wouldn’t it behoove chemical engineers to know something about how the first synthetic polymers were invented? The place of Faraday and Ohm in developing the intellectual underpinnings for electrical engineering? Something about the 19th-century communications revolution ushered in by the telegraph, “the Victorian Internet”? And, even in our own era, the story of Alan Emtage, the African American from Barbados, who is generally credited with developing the first pre-web Internet search engine, Archie, in Montreal in 1989? As for STEAMers, wouldn’t they benefit from knowing something about the history of design, whether about William Morris and the arts and crafts movement, or other movements such as De Stijl and the Bauhaus, and about people such as William Fetter, the Boeing designer, who coined the term computer graphics?

And, I should add, such history should not be seen as a frill or add-on, or even as something whose high opportunity costs outweigh its benefits. Quite the contrary, I submit. It is not merely plausible, but likely that students can do STEM/STEAM work more effectively if they incorporate into their intellectual tool kits both historical content and, more important, an appreciation of history as a “way of knowing.” Moreover, historical thinking won’t be obsolete before students have drawn their first paychecks, unlike the knowledge gleaned from sweating over an incremental quantum of highly specialized technical knowledge regarding a particular method, highly calibrated process, or small-bore application. Besides, “thinking in time”—the words form the title of a (once) well-known 1986 book by Richard E. Neustadt and Ernest R. May of Harvard—can help STEM/STEAMers with entrepreneurial bents to make better business decisions by enhancing perspective, providing discipline, reducing errors caused by bad analogizing, and, not least, by reining in hubris.

Thus, my call for THEMAS. To be sure, STEM and STEAM people are not totally resistant to the H word, and both Yakman and RISD offer modest places for it in their STEAM curricula. But I am calling here for both acronymic and substantive equality. I’m also leaving the door open for my friends and colleagues in the humanities and social sciences to join the discussion and, if so inclined, to create their own acronyms and to make cases for their own disciplines as well.

Regarding the last point: it is quite beyond me how on earth ardent STEM/STEAM advocates can believe that their preferred curricula can prosper without their students knowing—at a bare minimum—how to read deeply and write good prose, without mastering the basic principles of economics, and without understanding something about logic, human psychology, ethics, and geographical/spatial thinking. Is one more engineering course relating to materials management in construction or ASIC verification more worthwhile for a budding engineer than a course or two on the history of technology? Or, going to bat for my friends in English departments, a course on Shakespeare? It’s hard to believe so. Indeed, regarding history, I would go even further and argue that every STEM/STEAM department should not only offer historically oriented courses but also employ trained professional historians.

Why? For starters, to deepen students’ understanding of their own STEM/STEAM disciplines, to broaden both their analytical frames and their skills sets, to provide them with additional cultural capital, and ultimately to enhance their long-term career viability in the global labor markets in which they will likely be competing for the rest of their working lives. To be sure, there are plenty of good reasons for college students today to major in STEM disciplines and to segue into STEM careers. That said, it would be a mistake to discount too heavily the future value of “investments” in history specifically and the humanities generally. Most STEMers will find the skills they learn in history to be useful as they progress in their careers, and in time many will work with (or for) historians and other humanists. As an added bonus—hardly an incidental one—history and the humanities, as William Deresiewicz has recently argued, can help to guide one toward a meaningful life.

Peter A. Coclanis (aka PAC-Man) is Albert R. Newsome Distinguished Professor of History and director of the Global Research Institute at the University of North Carolina-Chapel Hill.