The AHA Taxonomy Project, Part 2: The Members Speak, and the President Thanks Them 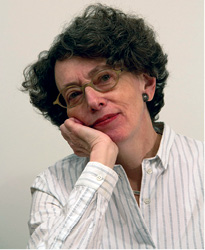 In my September column, graced with a James Gillray cartoon of Napoleon and Pitt hungrily carving up the world, I wrote about the difficulties of the enterprise of taxonomy in general and the particular difficulties encountered by the ad hoc subcommittee that revised the AHA taxonomy last spring. (The subcommittee is composed of Council members Farina Mir, Andrew Rotter, and myself.) Both preceding and accompanying that column was an invitation to AHA members to use the member forum of AHA Communities to comment publicly on the draft of the new taxonomy. Although we didn’t bill it as such, our invitation doubled as an experiment: we wanted to test whether the crowdsourcing possibilities offered by digital technology could effectively provide the AHA with member input into its work. Following the time-honored procedures of the predigital age, the new taxonomy had already received the preliminary scrutiny of the AHA Council—the members’ elected representatives—at its face-to-face meeting in June 2014. Could an online forum capture the views of the membership directly at this juncture and thus add a new layer of democratic participation in AHA business?

Many of us on the Council were frankly nervous about “taking the taxonomy to the people” at all and especially about soliciting our constituents’ opinions in a digital medium. Our own, small-scale discussion of the details of the taxonomy had revealed differences of opinion at every turn; well aware that the Internet tends to discourage subtlety, magnify disagreement, and bring out the less polite aspects of participants’ personalities, we imagined far worse in an online conversation among a vastly larger group of historians. Grumblings about opening a can of worms were heard. But we nonetheless opted to enter the digital age in this area of AHA governance. Now that the experiment has concluded, I am happy to report that none of our worst fears materialized, and the experiment was, quite simply, a success.

The member forum was open for comments about the draft taxonomy from August 18 through September 30. During that six-week period, 54 individual AHA members, some writing two or three times, made 64 substantive comments or suggestions. A full 38 of those responses appeared on August 18, the day the draft taxonomy was released, leading to expectations of an avalanche of opinion. But activity tapered off sharply after a few days. These statistics tell only a part of the story; in fact, they miss the most striking part: the tone and content of the responses. None were impolite, and many respondents went out of their way to thank the AHA taxonomists for their labors. Thoughtful, nuanced remarks and well-reasoned proposals were the rule. In fact, the AHA membership could be said to have instantiated the ideal type of the online discussion forum. The taxonomy subcommittee has not yet finished its consideration of the suggestions concerning the geographical/temporal fields. But our discussion of the thematic categories has yielded 14 changes, including new freestanding categories and additions to clusters of categories—all to be included in a newly revised draft on which the Council will vote in January. We regard that as a significant harvest, with more fruit still to come. 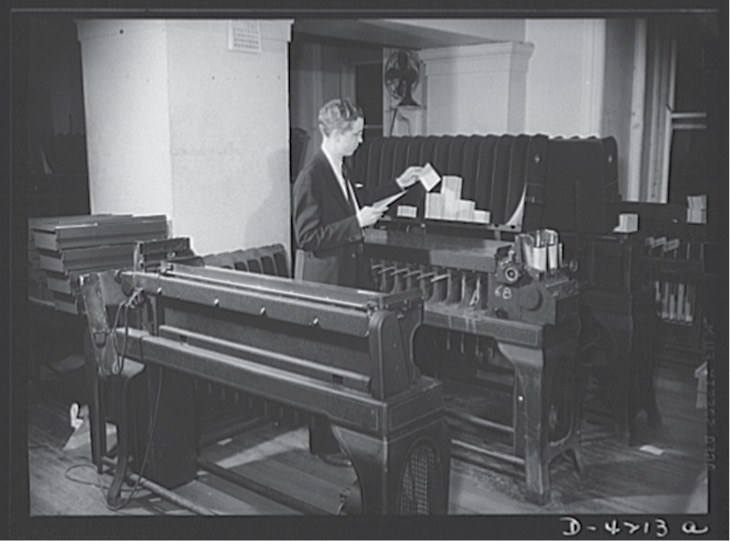 A consequential taxonomy in action. In the early 1940s the federal government sent a checklist to American scientists asking them to identify all their areas of specialized knowledge; the data gathered were then fed into this card-sorting machine to determine the individuals who were best equipped to aid the war effort. Photo: Library of Congress Prints & Photographs Division.

Overwhelmingly, members asked for increased specificity. They wanted to alert us to the existence of flourishing subfields—usually the ones they participated in—that had escaped our notice. A couple of voices were, however, raised on behalf of the diametrically opposite position. Members of this persuasion—whom we might call holists—contended that the discipline of history was already excessively fragmented, awash in inward-turning specialties that rarely communicated with one another or with the broad, nonacademic public. They called for the AHA to buck this trend, not ratify and abet it with a splintered taxonomy.

In a partial reply to the holists, it is worth pointing out that, while the AHA taxonomy is an obvious field day for splitters, it also caters to lumpers. Members may select its general headings as well as its specific subheadings when they name their teaching and research fields. Thus if a member regards early modern Europe, taken as a whole, as an apt description of her research interests, she can choose “Early Modern Europe, 1500–1800” rather than, say, “German Lands, 1500–1800.” If another member teaches the entire history of China, he can opt for “China” tout court over “Late Imperial China, 1368–1912.” Although it is the sheer abundance of specialized labels that first meets the eye, the taxonomy also offers their general counterparts, sprinkled throughout the listings, as equally valid options.

The holists also implicitly raised the issue of the purpose of the taxonomy: Shouldn’t it be harnessed, they suggested, to shape the broad contours of the American historical profession? Members with other interests at stake posed that larger question explicitly. What was the purpose of the taxonomy, anyway? How could one evaluate it without knowing what it was meant to do? In this line of questioning, the ad hoc subcommittee recognized a real gap in our initial presentation of our work, one requiring ex post facto attention.

While the subject of taxonomy can generate ruminations of a lofty, epistemological sort, the purposes of the AHA taxonomy are actually far more modest, down-to-earth, and practical. Most basically, the taxonomy functions as a way for the Association to learn something about its members, both as scholars (we are each asked to choose three research fields) and as teachers (we are likewise asked to choose three teaching fields). The taxonomy also informs the Association about overall trends in the profession—which fields are large and popular, which are waxing, which are waning—thus helping it better serve the membership. The concrete applications of the information produced by the taxonomy are quite mundane: the Association can generate field-specific lists for such purposes as sending topically based material about the annual meeting or requests for contributions to specialized book prize funds.

The taxonomy also sends an implicit signal to the Association’s members. If they find a set of categories in which they can easily recognize themselves, they are much more likely to feel comfortable in their capacity as members and to regard the AHA as representing them. If, on the other hand, their chief self-labels, or something reasonably approximating them, are absent, their sense of belonging will be correspondingly attenuated. Clearly, it is the first, welcoming signal that the Association wishes to send.

Because historians’ research and teaching interests are always in flux, the taxonomy needs periodic updating to mirror the membership accurately. With respect to such changes, the Association is alternately reactive and proactive. We want to “keep up with” changes that have occurred since the last revision—for example, adding the now well-established field of Late Antiquity to the European categories. But we also want to gently nudge the profession toward changes that seem to be on the horizon—for example, the placement of North Africa not only in the Middle East but also in Africa as an object of study relevant to historians of both geographical areas. While the subcommittee embraced that nudging strategy, we do not see the taxonomy as a major arena of policy making. If, for example, some members want to move the profession toward greater engagement with the general public—a laudable aim, in my view—there are better ways to argue that case than to contest the degree of specificity of the taxonomy.

Since all taxonomies are artificial constructions, and since they serve a legitimating function (either deliberate or unwitting) with respect to the objects they include, they are bound to be controversial. That is why the AHA asked for member feedback. We want to stress, however, that the legitimating function of the AHA taxonomy is weak and informal. The taxonomy is not widely promulgated; AHA members need not fear, as did one respondent this summer, that historians working in fields not explicitly listed will be automatically penalized in fellowship and grant competitions.

In my September column, I included the Gillray cartoon to represent what our taxonomy is not—that is, the work of voracious, imperialist ideologues. My inclusion of an image in this column has a similar reverse logic. The card-sorting machine photographed by the US Office of War Information in the early 1940s was applying an eminently consequential taxonomy. The government had sent a disciplinary checklist to all the scientists in the country, requesting them to choose the subjects in which they possessed expertise; once entered on punch cards, this data enabled the machine to identify the scientists best suited for the war-related tasks at hand (for a discussion of this wartime taxonomic initiative, see the essay by Beatrice Cherrier at bit.ly/1tTpU8t). By contrast, the AHA taxonomy is relatively inconsequential; it will not recruit you for a life-altering mission. But it does allow the Association and its members to picture our profession in all its myriad variety and helps the Association respond to the needs of its diverse constituents.

Because this is my last column as AHA president, I would like to close with a second evocation of the model online conversation to which the taxonomy project gave rise. The point is obvious: this Association has a wonderful membership.

The Presidential Address at the Annual Meeting

“Toward an Empirical History of Moral Thinking: The Case of Racial Theory in Mid-19th-Century France”

The relationship of historians to the moral implications of the subjects they study has always been a thorny one. In her presidential address at the annual meeting, Jan Goldstein will suggest that, between the extremes of pronouncing moral judgments on past events and taking refuge in the position that moral criteria invariably shift over time and shouldn’t concern us per se as historians, there is a place for a specifically historical inquiry that she calls the empirical history of moral thinking. Through its identification, in empirical terms, of the parameters of moral judgment on certain topics at certain historical moments, such an approach might, while avoiding both blame and exoneration, restore intelligibility to the morally freighted actions of people in the past. To test this approach, Goldstein, an intellectual historian, will apply it to the vogue of racial theorizing among intellectuals in mid-19th-century France. Her cast of characters will include the members of the Paris Ethnological Society of the 1840s and, for the period just after the decisive rupture of the Revolution of 1848, Alexis de Tocqueville, Arthur de Gobineau, and Ernest Renan.