Pathogens of the Caribbean: The Prequel

As this is my last column as an AHA vice president, it is high time I performed a public service. Here it is. Historians, look at the fine print before you sign.

One afternoon while I was struggling to grade midterm exams in my office, the phone rang. “Rob Bucks” (I use a pseudonym not to protect the innocent, but to protect me from the wrath of a militantly litigious desperado) introduced himself in staccato sentences. He said he was a Hollywood producer and wanted to “make a major motion picture out of Mosquito Empires.” We historians often joke about the movie rights to our books, but Rob Bucks’s ambition struck me as among the most implausible things an adult had ever said to me, as it concerned a book I had recently published that deals with yellow fever and malaria in Caribbean history, and is chockablock with depressing stories of masses of nameless people suffering and dying young in doomed settlement schemes and military operations. So I asked Rob Bucks if he had read my book. He responded with practiced evasion: “I love history. I read history all the time.”

After he offered further assurances of his deep interest in my work, I asked him if he was aware that there was nothing resembling romance in my book, and the only intimations of sex involved obscure species of mosquitoes. He was undeterred and replied, in his characteristically familiar way, as if we had been friends since grade school, “John, John, I can help you with that.” He invited me to write a “skeleton screenplay, 100 scenes for 100 minutes that will fire up the brains of a billion teenagers around the world.” I felt both flattered and bewildered, and told him I would think about it and get back to him. Riding my bike home that evening I did some mental arithmetic and estimated that indeed there are nearly a billion teenagers in the world. I also settled on a title for my major motion picture: Pathogens of the Caribbean. Should I ask for a percentage of the gross, or take a lump sum? Could we get Johnny Depp to play a lethal virus? 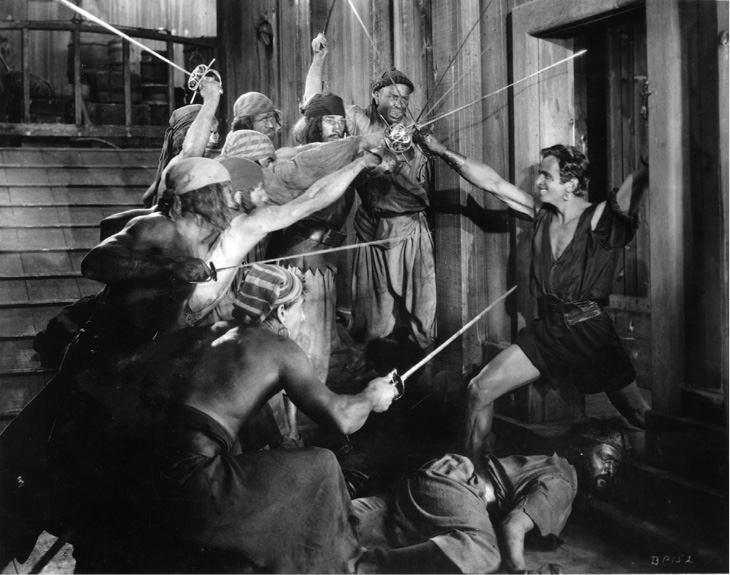 Douglas Fairbanks in The Black Pirate (1926).

In a world where buccaneering movie producers would mercilessly plunder the intellectual property of historians, luck, sloth, and timidity proved more helpful than swordplay against Hollywood’s predatory promises.

At dinner I told this story to the teenagers I know best. They reflexively performed Internet research and ascertained that Rob Bucks had indeed produced some movies, including one that featured actors known to all my kids. His most recent effort, however, had flopped ignominiously. But my teenagers’ brains were all fired up, eager to see my book translated to the silver screen, perhaps with roles for them, if only as extras.

As happens so often, I disappointed them. After brief reflection, I concluded I did not know how to write a screenplay, skeletal or fleshy, and would do it badly if I tried. Seemingly endless streams of student essays called out for my attention, and various editors were waiting—patiently and impatiently—for me to deliver essays of my own.

Two weeks after passing on this opportunity of a lifetime, I had dinner with another historian (“Professor Jones,” to protect the innocent), who had given a talk on my campus about his latest, much-admired book. I began to regale him with the story you have just read, but did not get far before he interrupted and said, “Wait, it’s not Rob Bucks, is it?” I soon learned from Professor Jones that my book and I were not alone in meriting a phone call from the movie producer. My friend had received the same pitch, not long before his book appeared, but unlike me, he had followed through, made a deal, and written up something for Rob Bucks. Then, when the book came out, Jones continued, Rob Bucks sued him for some version of infringement upon intellectual property.

I was more alarmed than Professor Jones, who told me his agent was handling the matter. He seemed miraculously unruffled, while I tried to imagine what I would do if sued for publishing my own book. Through a combination of laziness and reflexive devotion to routine duties, I had unknowingly dodged a legal bullet that would have hit me hard, with no agent to absorb the impact for me.

When I look back on the affair, I marvel at Rob Bucks’s business model. Only a desperate man out of good ideas (indeed, out of moderately bad ideas) would hatch a plan to recoup his fortunes by suing academic historians. In the annals of American entrepreneurship, this must rank among the least promising schemes ever concocted. For a movie producer, presumably accustomed to deals involving millions of dollars, this was passing strange. He could sue the entire membership of the AHA, win all his suits, and still walk away with only chump change. In the process, however, Rob Bucks could financially ruin almost any historian who signed a contract that, buried in the fine print, turned over some form of intellectual property rights to the producer. Perhaps historians were only the tip of Rob Bucks’s iceberg, and he was also trying to induce academic economists and engineers into movie deals. That might be more lucrative, if any could be found who thought their latest paper would make a great movie.

So, my fellow historians, if the phone rings and your caller claims to be a movie producer, beware. If you want to see your book as a major motion picture (and who doesn’t?), read the fine print before signing your deal. Or get an agent first.