Genetics as a Historicist Discipline: A New Player in Disease History

Historians in Lab Coats”—that’s the new epithet for the molecular biologists who have taken the limelight in the field of disease history.1 This role is not limited to just recent disease history, where, for example, genetics is playing a major role in tracking the evolution and pathogen mutation in still-unfolding epidemics, such as HIV/AIDS, cholera, or Ebola. The most notable work, rather, has focused on my period, the Middle Ages. True, this research is usually still heralded in the “Science” section of major newspapers, rather than the “Culture” section, where historical studies (assuming they are reviewed at all) would normally appear. But the fact that history has come to be defined by breakthroughs made by scientists, rather than historians as traditionally defined, signals a sea change. One particular breakthrough in 2011 actually elicited an editorial in the New York Times,2 which celebrated the complete sequencing of the bubonic plague bacterium from 14th-century remains in London, an achievement that finally closed decades of debate about what “really” caused the Black Death.

Welcoming a new player onto the field of historical research is not something we traditionally trained historians always do gracefully. But I would argue that we should embrace our new sister discipline. Despite the hype in the popular press, the molecular genetics work that has contributed so substantively to the history of plague and several other disease histories hasn’t pushed us off the playing field. It has an inherent limit: genetics tells us only the story of the pathogen.3 It does not tell us how, in the case of plague, a single-celled organism came to be dispersed over half the globe in the medieval period (and around the whole globe by the beginning of the 20th century). It does not tell us about all the animal species—not simply rats, but also marmots and gerbils and maybe camels and storks—that helped transmit the organism thousands of miles from its place of origin. Least of all does it tell us how people reacted to such massive devastation, or why they looked to the stars, or local minority groups, in their search for explanations or objects of blame.

I have just finished editing a collection of essays unlike anything I ever imagined possible. The essays constitute the inaugural issue of a new journal, The Medieval Globe, and are devoted to the topic of the Black Death.4 The collection brings together an interdisciplinary team of scholars: archeologists, microbiologists (one of whom has expertise in biosecurity), a biological anthropologist, and historians with geographical specialties ranging across Afroeurasia. Our agenda has been straightforward: to ask how the new genetics understanding of Yersinia pestis, the causative organism of plague, can alter the way we understand the history of one of the worst pandemics in human history. 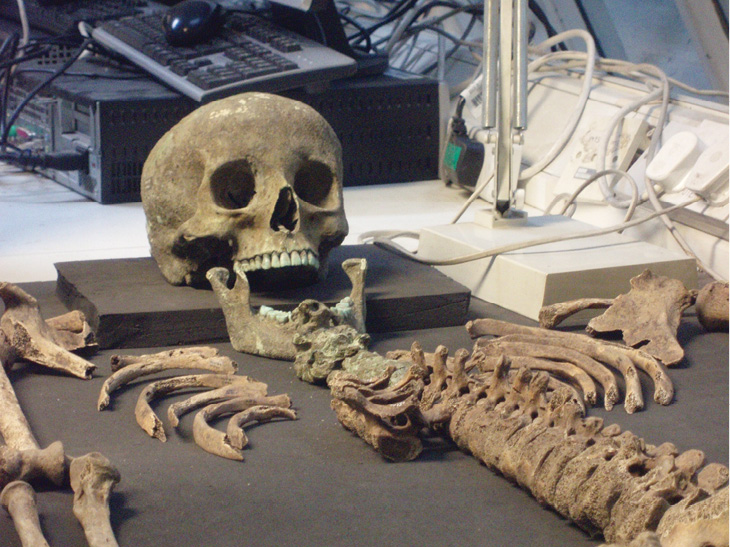 Human remains from the East Smithfield Black Death Cemetery in London. DNA fragments from this cemetery were used to reconstruct the genome of Yersinia pestis in 2011.

The reason for letting the work of molecular geneticists drive our research questions about the Black Death is simple: we historians invited them in. Geneticists have taken the lead in plague narratives because they were attempting to solve a problem that had proved unsolvable by traditional (document-based) historical methods. For a variety of reasons, the 1970s and ’80s engendered new questions about whether the Black Death (usually dated 1347–53) had really been caused by Yersinia pestis, the same bacterium identified as the cause of plague in 1894 during an outbreak in Hong Kong that, in spreading globally, would become known as the Third Plague Pandemic. But few people prior to the late 19th century saw bacteria, and none saw viruses. They saw (or conceived of) disturbances of the humors or qi or some other construct to explain the physiology of disease. Hence, our written historical sources would never give us a definitive answer to the question: What was the disease?

The development of ancient DNA (aDNA) technologies and analytics has broken through the 19th-century barrier because they can now retrieve bacterial (and even viral) fossils. As with plague (Yersinia pestis), whole genomes have now been sequenced from historical remains for the 1918–19 strain of influenza virus, leprosy (Mycobacterium leprae), cholera (Vibrio cholerae), and tuberculosis (Mycobacterium tuberculosis complex).5

The particular relevance of genetics for the narrative of disease history, however, goes beyond simply confirming the presence of particular pathogens at certain times and places in the past. More profoundly, the new molecular genetics creates an evolutionary history of the pathogen: it shows the historical relationships between different strains, it suggests a general chronology of development, and, most useful to us historians, it grounds those evolutionary narratives in geographical space. Most genetics work on Yersinia pestis has not been done on historical remains (which continue to be rare, subject to fortuitous retrievals by archeologists) but on modern samples of the organism. These can document only strains that have survived to modern times. Nevertheless, their spatial distribution contributes to a “story” of how the organism has moved around and developed. The new genetics allows the creation, even if only in a tentative way, of a unified history of plague: one that covers nearly the whole of Eurasia and even incorporates Africa; one that looks across a wide variety of species and environments that may have proved hosts to plague; and one that connects a broad chronological expanse, from the 13th century to the present day.

Filling in all the still-blank spaces of chronology, geography, and host environments and landscapes demands the traditional skills of the historian, who can draw from a rich array of written sources and other products of human culture. It demands linguistic competence to read those sources in their original languages and cultural competence to “read” them for all their nuances of contingent local meaning. Yes, we remain uniquely dependent on the geneticists for certain aspects of our interpretations. Although I have inspected human remains from the London Black Death Cemetery (see photo), I have never seen any of the molecular fossils scientists claim to have extracted from them. But after immersing myself in their published work for the past eight years, I understand why the geneticists are making the inferences they make. Taking their conclusions as working hypotheses, I and my colleagues have been able to put forward several robust hypotheses of our own, including how, when, and why plague emerged out of its evolutionary home in the Tibet-Qinghai Plateau in the 13th century. I have even tentatively postulated, on the basis of the genetics, that plague may have reached areas that have never been part of Black Death narratives before.

Our experience suggests, then, that the biological sciences can be usefully deployed to inform historical analysis. Molecular genetics has the power to reconstruct a history of material existence—in this case, of microbes—at a level that no other kind of historical source or method can reach. Moreover, in the case of an ecologically complex disease like plague, other fields—such as zoology, entomology, and bioarchaeology—have great potential to inform our work. And my experience suggests that, if introduced thoughtfully, such science can be deployed even in the undergraduate classroom. Being challenged in this way by a discipline so utterly different in its methods and questions from our own can make us better historians and highlight the unique contributions we make as humanists.

Monica H. Green is a historian of medieval medicine and global health. In 2009 and 2012, she ran a National Endowment for the Humanities Summer Seminar in London, “Health and Disease in the Middle Ages”; participants wrestled with the problem of opening up dialogue between the humanities and the historicist sciences.

3. There is also genetics work that looks at disease history from the perspective of human genetics, such as evolutionary responses to malaria, tuberculosis, and cholera. I am referring here only to work that focuses on the pathogenic organism of infectious diseases.