Nonbinary Language in the Historical Community

Word nerds look forward every December to the announcement of Merriam-Webster’s Word of the Year. Using lookups in their online dictionary, the M-W staff choose words that have shown a marked uptick in activity. This data led them to declare previous Words of the Year such as “bailout” in 2008, “austerity” in 2010, and “feminism” in 2017. It’s not hard to see how current events, politics, and culture influence these choices; the Great Recession hit in 2008 and endured into 2010, while the Women’s March in 2017 rejuvenated discussions around the world about feminism and gender equality. In 2019, M-W declared that the Word of the Year was “they,” reflecting an increase in usage of the word as a singular pronoun, with lookups nearly double the previous year. 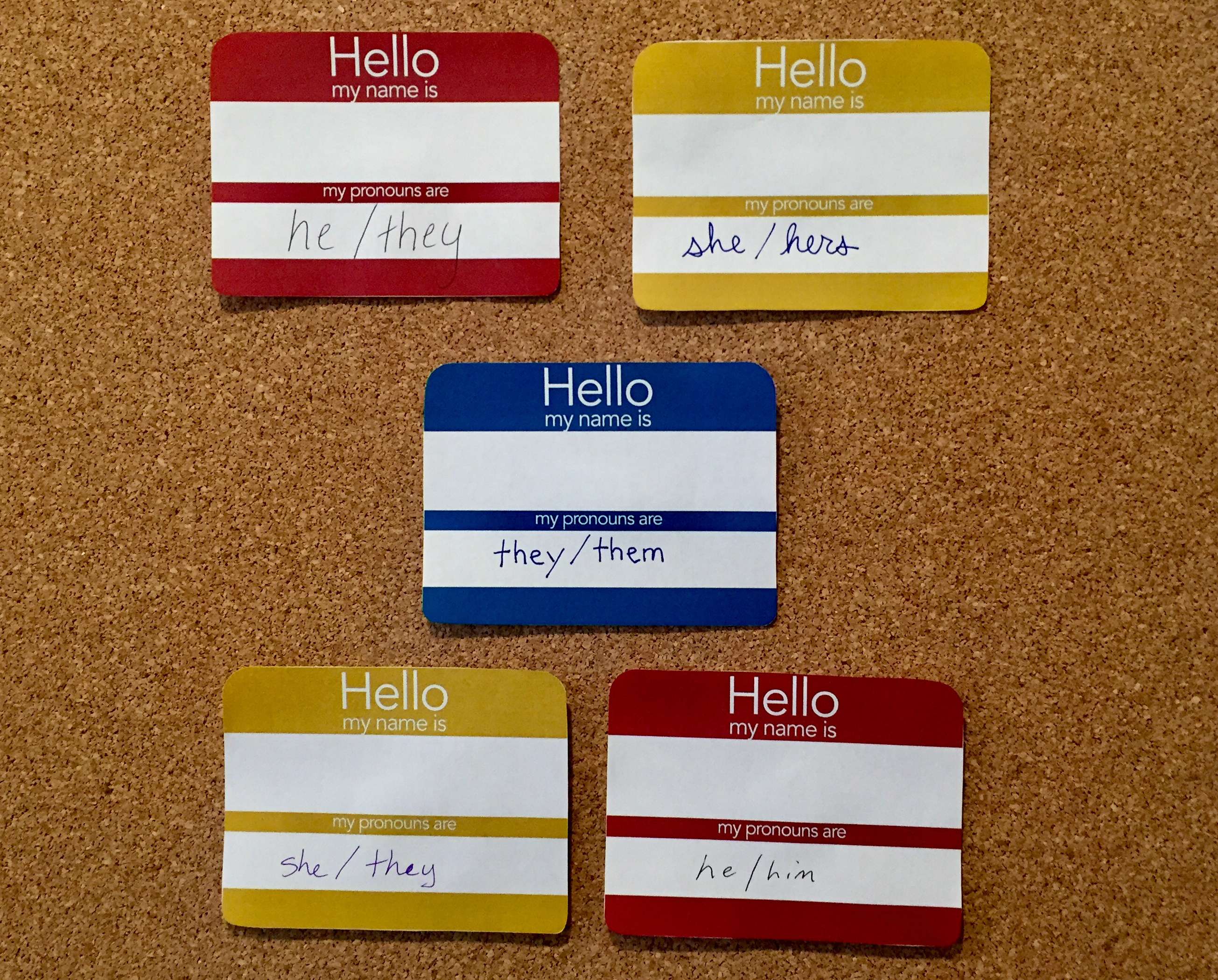 In professional contexts like conferences and classrooms, providing a space for participants to identify their pronouns has become an easy way to show respect for others. Karen Lou

For decades, Americans have been jettisoning gendered language from their vocabularies, embracing terminology that can be used for any gender. In air travel, stewardesses have become flight attendants; restaurants now employ servers instead of waiters and waitresses; firefighters and police officers have replaced firemen and policemen in our communities. People question how descriptors like “bossy” vs. “assertive” are applied based on gender.

But pronouns have been a sticky problem. As the dictionary’s staff wrote in explaining their pick, “English famously lacks a gender-neutral singular pronoun to correspond neatly with singular pronouns like everyone, someone, and anyone, and as a consequence ‘they’ has been used for this purpose for over 600 years.” Writers as illustrious as Chaucer and Shakespeare wrote using the singular “they.” Nonbinary folks have tried in the past to adopt new pronouns, like “ze/zir” or “ze/hir.” But those never caught on widely the way that “they” has. The use of the singular “they” as a pronoun was added as a sense (“definition,” to the layperson) in M-W in September 2019: “used to refer to a single person whose gender identity is nonbinary.” For those who identify as nonbinary, gender nonconforming, or genderqueer, this change reflects and affirms their usage of the pronoun.

Pronouns come up in all kinds of professional settings for historians. Many conferences, including the AHA annual meeting, now give attendees the option to identify their pronouns when registering and on their conference badges. Some choose to list their pronouns in email signatures or in social media bios, making it easier to know how to address someone or talk about them in digital communications. These habits are now encouraged for trans- and cisgender people alike, as it normalizes the practice for all.

“At the end of the day, do I want to speak to the students that I teach or to academic historians who might not have the same investment in what this offers?” Manion asked.

And now nonbinary language is making a splash in historical scholarship. In their new book Female Husbands: A Trans History (Cambridge Univ. Press), Jen Manion uses they/them pronouns for the eponymous subjects. Covering the United Kingdom and United States from the mid-18th to the early 20th centuries, Manion tells the stories of people who were assigned female at birth who married women. Other historians have written about such relationships in the context of lesbian history, often assuming that the only way for two lesbians to be married was for one to live as a man. But Manion, by using a trans history methodology, has opened the door to interpreting these individuals as lesbians or trans—though they are careful not to apply the modern word “transgender” to these female husbands.

The use of nonbinary pronouns was baked into the project from the start. Manion told Perspectives, “When you think through the alternatives, nothing else makes sense.” Historians who have written about such cases in the past have used feminine pronouns to discuss the subject’s life as a child or young woman, switching to male pronouns after they began living as men. But Manion was uncomfortable doing the same. “We can rarely identify the precise moment they began living as men, and the timing seemed arbitrary,” they said. In discussing trans people today, we do not use different gender pronouns for before and after transition; “to continue that practice in history is transphobic and not viable. It’s not accurate and it’s alienating to a community that deserves a history.” Using male pronouns throughout the subjects’ lives would also be misleading. Some female husbands were married to men at other points in their lives, a time when using “he” would also seem to have been inaccurate. For Manion, “they” became the only clear choice.

With nonbinary language inherent to the project from the beginning, finding a publisher that accepted this decision was vital. Cambridge University Press was “100 percent amazing,” according to Manion. “I have had so many pieces where editors have agreed to the nonbinary language, and then copy editors destroy it. They don’t realize they’re changing the whole meaning of the story.” The editors at Cambridge “respected my language,” and Manion could be less worried while reviewing the copy-edited manuscript that changed pronouns would sneak by.

Colleagues too were mostly supportive of the language choice. But Manion was not daunted by those who questioned whether using nonbinary pronouns would make the project “dated” as language continues to develop. “At the end of the day, do I want to speak to the students that I teach or to academic historians who might not have the same investment in what this offers?” Manion asked. “If I have to choose and the pronoun issue is the dividing line, then I want to speak to young people who deserve a history.” The addition “they” as a singular pronoun to Merriam-Webster, the dictionary of choice for most US publishers, means that Manion’s book won’t seem dated anytime soon.

Pronouns come up in classroom settings too. Discussions abound about the best way for professors and teachers to discuss pronouns with students, and practices have rapidly shifted over the last decade.

Elizabeth Reis, professor at Macaulay Honors College, part of the CUNY system in New York City, has seen this shift occur across her two decades of teaching. Reis first began teaching transgender history in the late 1990s at the University of Oregon, when few were thinking to ask students about pronouns and when “probably 95 percent of the class didn’t know what transgender even meant.” But Reis found that these questions arose around 2005, when student groups at Oregon began asking event participants to identify themselves by name and pronoun.

Reis brought this practice to her class after witnessing it at a campus event. But she received immediate feedback from a trans student that the pronoun question put the student in a strange position. “I could see right away that she was uncomfortable with this,” Reis told Perspectives. “And that’s when it made me wonder if it was doing what I wanted it to do. As more and more trans and gender-nonconforming students are in class, does this exercise make them more or less comfortable? It was clear in this one instance that the student, who had just started transitioning and using a new name, was uncomfortable. I could feel the student’s embarrassment. And afterward, the student came up to say that though she was getting used to her new name, she wasn’t ready for the pronoun question.”

Discussions abound about the best way for professors and teachers to discuss pronouns with students.

Ever since, Reis says, she has “wanted to make a space for people who want to say their pronouns, but not make students feel like they have to divulge.” But it’s a fine line, since she also doesn’t want students to think that she doesn’t care. So now she opens her first class with introductions, telling students they may clarify their pronouns publicly if they’d like. She does this in every class, not just transgender history or other gender studies courses.

Manion has also experimented with different ways of asking about pronouns in the classroom. “I don’t think there’s a one-size-fits-all model,” Manion says. “It depends on the class size, the subject, the environment; it depends on you.” Amherst now allows students to put pronouns into their internal data system, so pronouns appear on the printed roster alongside students’ names. Instead of asking bluntly for introductions that include their names and pronouns, Manion now uses a prompt in the first week of class, asking students about a list of things that can help them feel supported, including pronouns.

Context matters, too. At their last institution, Manion also directed the LGBTQ Resource Center on campus, making them visible as an advocate for LGBT students. But after moving to Amherst, “I was not known as that, and after I was here a year, I realized that that was missing. Students weren’t necessarily assuming from the beginning that I was trans myself or trans affirming or an advocate. So I do introduce it, to signal its importance.”

For some cisgender people, these issues may seem unimportant or irrelevant. But Manion reminds us, “Everyone has gender. This conversation often gets so focused on this one minority, but it’s really just the latest conversation about this tremendous force that has always shaped our lives.”