While the 2008 recession led to declines in all liberal arts majors, history was hit particularly hard: according to the most recent AHA history majors report, between 2011 and 2017, the number of history majors dropped by almost 30 percent. As students turn to majors that offer clear career paths and lucrative starting salaries, articulating the value of the history major has become more important than ever before. As the latest opportunity to share successes and explore new ideas, the “Marketing the History Major” session at the 2020 AHA annual meeting drew on the experiences of four departments to suggest new directions for recruitment and retention. 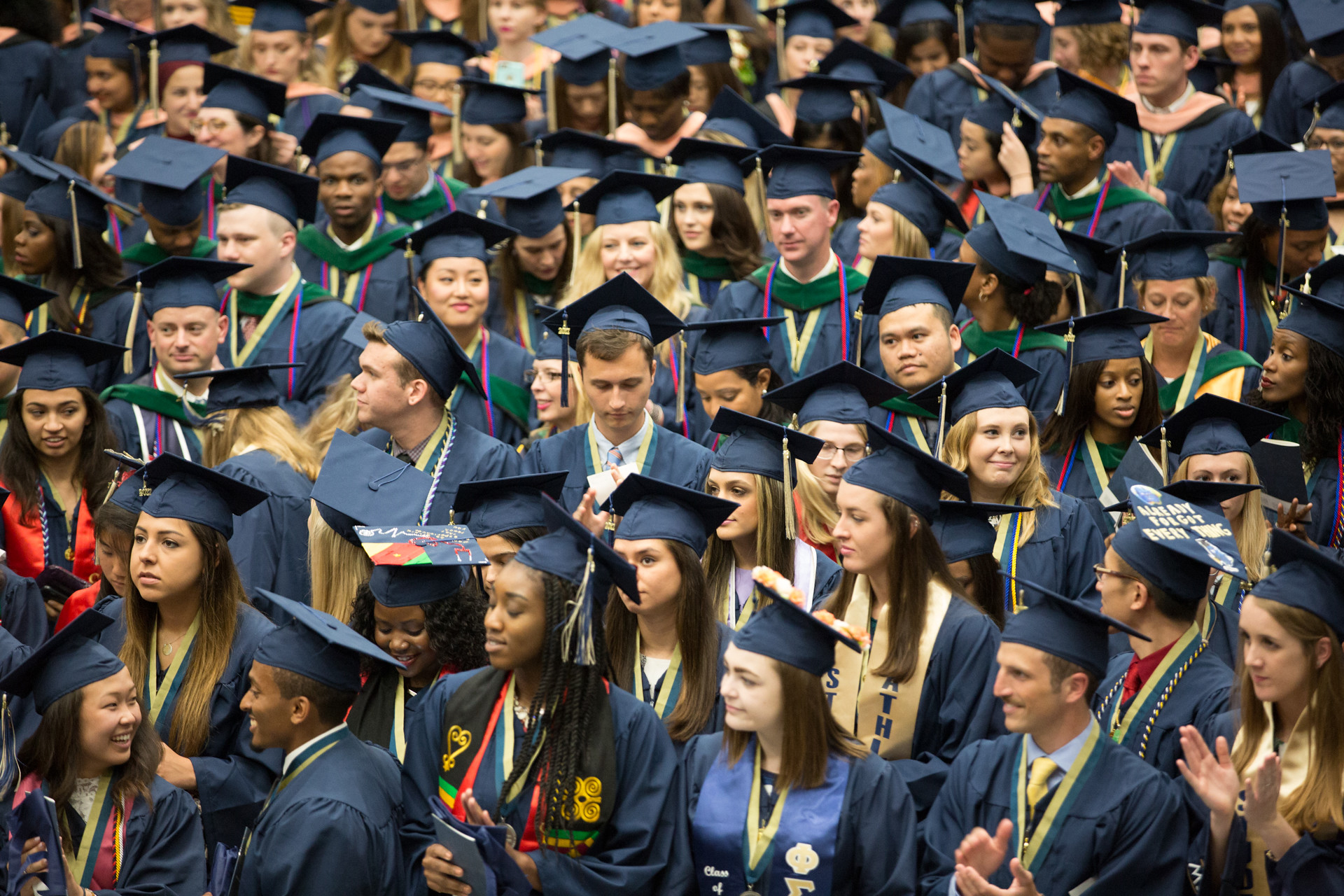 At the 2020 annual meeting, faculty came together to discuss how to convince students that a history major can teach valuable skills and lead to a variety of career paths after graduation. George Washington University/Flickr/CC BY-NC 2.0

Chaired by Paul Deslandes (Univ. of Vermont), the panel featured Elizabeth Drummond, chair of the history department at Loyola Marymount University (LMU); Sarah Olzawski, a senior academic counselor at the University of Oklahoma (OU); Darien Davis, chair of the history department at Middlebury College; and Justin Behrend, chair of the history department at SUNY Geneseo. Despite their institutional differences, the panelists identified similar difficulties and solutions. The panel’s concerns closely mirrored the larger trends identified by the AHA: changes in general education requirements; students seeking clear pathways to employment; and increasing institutional focus on science, technology, and health programs. As the past decade has shown, when students enter college with a laser focus on an immediately lucrative career, the humanities often suffer.

Panelists noted that changes in general education requirements often mean that fewer students are required to take meaningful history courses. As general introductions to the humanities or social sciences have replaced specific history surveys, and upper-level history courses have fulfilled fewer distribution requirements, undeclared students lost opportunities to become familiar with the discipline and the department. Similarly, AP credits pose a significant challenge: when motivated and capable students are excused from introductory courses, they often do not meet faculty or attend events that showcase a major in history as a viable option. The panelists agreed that it is time to stop relying on general education surveys as a cornerstone of recruitment, and to seek alternative ways to introduce students to the major. Their success stories offered several areas of focus for departments seeking to increase their numbers: communicating the relevancy and value of a history degree, using quantitative and qualitative data to understand what students want and need, and creating a departmental culture that is welcoming and engaging.

Their departments found significant success in raising their profiles through concerted efforts to market the major using printed materials and revamped public program offerings. LMU introduced "Historians in the Headlines," well-attended conversations on history and current events, in order to diversify their public programming. Rather than relying on a traditional, single-speaker seminar model, the series places historians in conversation to show undergraduate attendees how historical interpretations are built and contested. Additionally, programs reached beyond the university audience with "free history lessons" that invited the local community to experience the department's work. Geneseo created a series of workshops for local history teachers, many of whom are alumni, with the added bonus of raising the department's profile in the local high schools.

It is time to stop relying on general education surveys as a cornerstone of recruitment, and to seek alternative ways to introduce students to the major.

Posters and postcards have been successful in multiple departments. Drummond noted that placement of such materials was key, crediting postcards placed in admissions and advising offices with piquing the interest of undecided students. With a side-by-side comparison of materials created by the administration and a poster designed by a team of undergraduate students at Middlebury, Davis made a compelling case for the use of student-generated materials to add character and visual appeal to marketing efforts. Successful content innovations included suggestions for pairing the history minor with complementary majors; ideas about how to pair history with a variety of popular, career-driven majors; and even offers of special advising on how to complete history requirements alongside STEM classes.

Ultimately, panelists reported that the most effective way to communicate the value of a history degree was by helping students and their parents understand the wide variety of careers open to history graduates. One way this is done is by shifting or repackaging the curriculum to offer more obvious career-related content. Drummond spoke of how her department shifted major requirements into specialized tracks—public and applied history; law, politics, and society; global economies, encounters, and exchange; race, gender, and culture; and environment, science, and technology. Davis described Middlebury’s shift from requiring a junior and senior thesis to a single junior requirement paired with senior seminars in areas including public and digital history. He also shared his department’s plans for a STEM history track, which has attracted interest from the college development department, as well as undeclared students and double majors.

Departments also drew on their alumni, showcasing the diversity of careers available to history graduates. Behrend described a successful pamphlet on alumni career paths created through a survey on the department’s Facebook page. LMU hosts a series of alumni events, including an alumni-staffed career night during parents’ weekend. Middlebury’s student-written blog includes interviews with alumni and the various paths they have explored.

Olzawski spoke about a very different approach to recruitment, describing the successful program she spearheads to attract students who felt pressured to enter college with business, science, and technical majors, but retained a love of history. Drawing on departmental and university data, she initiates conversations with the nearly 300 students at any given time who are at risk of failing their business or STEM major requirements, and who have taken more than one history class. Thanks to these emails and one-on-one advising, OU's history department has seen significant growth in the major from upper-class students who have changed majors; nearly 20 percent of OU's history graduates entered college with a STEM or business major. While some audience members raised concerns that this might be seen as "major poaching" at their institutions, Olzawski explained that the business and STEM departments were not upset to lose students who seemed unlikely to pass major requirements.

Once new history majors are recruited, how do you retain them?

Once new history majors are recruited, how do you retain them? Panelists agreed that the key was to create a sense of community and belonging among majors’ cohorts both inside and outside the classroom. At Geneseo, Behrend created a one-credit pass/fail introduction to the major that allows first-year students to interact with the department chair and full-time faculty, visit the library and archives, review study skills, and explore the breadth of the department’s offerings. In offering students the opportunity to get to know each other and the department, as well as by shifting the bulk of intro-level classes to full-time faculty, Geneseo has stabilized retention of declared majors. In order to combat the anonymity of a large university, OU began offering a series of “majors only” classes. LMU and Middlebury built what Drummond called “activist cores” of students: departmental ambassadors who worked (sometimes for pay) to represent the department at majors fairs, create marketing material, do outreach to student affinity groups, and host low-stakes student events like pizza and history Jeopardy. Panelists encouraged thinking outside the box to create positive cohort experiences. In response, an audience member helpfully shared her department’s approach at Catholic University: a senior thesis submission party in which students literally “run the gauntlet” of the research and writing steps they followed to reach the thesis finish line, offer a fun fact from their research, and receive a medal. After several years of this celebration, she noted, students now invite friends to watch what’s become a signature event of the department and a source of pride for majors.

The greatest barrier identified by both panelists and audience questions was support for marketing and retention efforts beyond the work of the department chair. The panelists discussed faculty buy-in as a two-pronged process; while most chairs admitted that they had taken on the bulk of the marketing work themselves, they all spoke about the importance of building support among their faculty by emphasizing the connection between enrollment numbers and the vitality of the department and creation of tenure lines. But panelists also pointed out the importance of creating a new narrative about the humanities in the wider campus community, especially to combat myths about employability. Ensuring that the entire institution, from admissions to health sciences departments, acknowledges the utility and complexity of history is a key step in raising the major’s profile.

The effects of such efforts go beyond an increase in student numbers. These changes have reshaped the way departments interact with administrators and colleagues—development departments become more interested in innovative history-major tracks and outreach, departments are able to make more coherent cases for new tenure lines, and strong history departments are able to reach out to allied departments to increase the profile of the humanities more generally within the school. Together, the success stories shared by the panel and the audience offered attendees some direction for what to try next, and contributed to a growing and important conversation across the discipline about how to make the history major more relevant and appealing at a time when the world is in dire need of college graduates with history skills.

Rachel Feinmark is a public history consultant and a historian of 20th-century US labor, religion, and human rights. She also teaches history at Bergen Community College.