Overseeing Intelligence: Historians Brief Congress on Its Past Relationship with the Intelligence Community

With Washington currently abuzz about the revelations regarding electronic surveillance by the NSA, the conflict between the Senate Select Committee on Intelligence and the CIA over a forthcoming report on ”enhanced interrogation,” and various other controversies, what better time to consider how Congress has sought to oversee the intelligence community in the past? This was the subject of the Congressional Briefing that the National History Center held on Monday, June 9, in the Cannon House Office Building on Capitol Hill.

The briefing was conducted by Laura Donohue, director of Georgetown University’s Center on National Security and the Law and author of The Cost of Counterterrorism: Power, Politics, and Liberty, and Mark Lowenthal, former assistant director of Central Intelligence for analysis and production, current adjunct professor at Johns Hopkins University, and author of the textbook Intelligence: From Secrets to Policy, now in its fifth edition. Both speakers hold history degrees. James Grossman, executive director of the American Historical Association and chairman of the board of the National History Center, chaired the session. It attracted a full house and was filmed by C-SPAN.

Laura Donohue provided a richly detailed account of the rapid growth of the intelligence community following the passage of the National Security Act in 1947, the subsequent absence of congressional oversight of its activities, and the revelations in the early 1970s of domestic surveillance and other abuses by the CIA, the FBI, and other intelligence-gathering agencies. These abuses spurred investigations by Senate and House committees and the passage of laws that sought to rein in these agencies and keep Congress apprised of their activities. 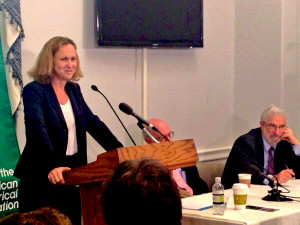 Mark Lowenthal provided a personal perspective on the subject, derived from years spent in the intelligence arena as a senior staff member of a congressional committee, a senior official in the CIA, a private consultant, and an academic. In 1974, he was completing his PhD in history under Ernest May at Harvard when the New York Times first exposed the domestic spying scandal, leading him on an unexpected career trajectory. He highlighted how the institutional structures put in place in response to the scandal actually operate. 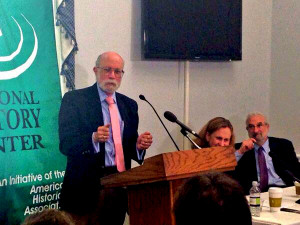 Lowenthal argued that, although “it’s not pretty,” the system of congressional oversight works fairly well. The key to its success, he suggested, is control of the budget. Donohue was less sanguine. She felt that rapid advances in computer technology in recent decades have created a very different intelligence-gathering environment, one that outstrips the controls created in the reforms of the 1970s and 80s.

This stimulating session accomplished exactly what the Congressional Briefings are intended to achieve—showing how the past informs the present by examining the historical contexts of contemporary controversies.