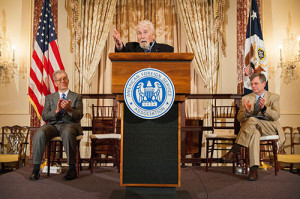 US Department of State

The collection includes 1,700 transcripts of interviews with ambassadors, Foreign Service officers, and spouses of diplomats. Kennedy’s interviewees shared colorful details about life overseas. For example, Kennedy interviewed Chas W. Freeman Jr., who worked his way up to different positions in the Foreign Service, including working as Nixon’s interpreter in China and later serving as ambassador to Saudi Arabia. In his interview, Freeman described the beginning of his career, and his first post in India:

In the district of the city called Adyar, which was at that time very much a Brahmin concentration, I developed a number of friends, just ordinary Indians. And they did me the great honor, on several occasions, of inviting me over to their house to dinner. A Brahmin may serve food to anyone, whereas he may not receive food from anyone but a Brahmin. And in the South, Brahmins can be polluted merely by contact with the shadow of someone of no caste. Well, obviously, Westerners have no caste, so to be invited to a home for a traditional meal, in a very traditional Hindu household, was quite an honor. The second time that I went to dinner with Mr. Ramanathan and his family, I had forgotten to recover some books that I had loaned to him. So on the way home, I turned the car around, and my wife and I went back to his house to collect the books, only to discover a Brahmin priest spreading cow dung and cow urine over all the places in which we had been, and chanting various incantations to purify the household we had polluted.

Kennedy conducted more than a thousand interviews himself, and others contributed over a thousand more interviews, making this the largest foreign service oral history collection in the country. The collection includes interviews on what it’s like to be gay or black in the Foreign Service; interviews relating to the Iran Hostage Crisis, the Berlin Airlift, and the Cuba Missile Crisis; among other subjects. In an interview with Julia Child, she talks about how she learned to cook French food, and how she came to write her famous cookbook.

Kennedy’s contributions were recognized in a ceremony at the State Department. A video of the ceremony is here, and photos are on AFSA’s Flickr account.