At the Venice Biennale: A History of Globalization and Modernism in New Zealand’s Architecture Pavilion

This blog post is one of a three-part series on the 2014 Venice Architecture Biennale. The other two are on the Chinese and UAE Pavilions. 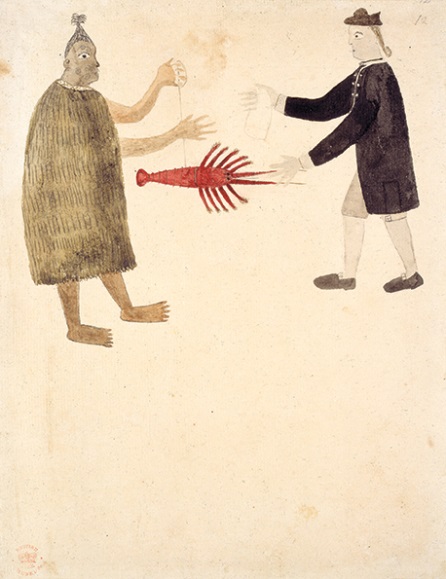 Early exchange in the Pacific: A Maori bartering a crayfish with an English naval officer [ascribed to Tupaia], 1769, from Drawings illustrative of Captain Cook’s First Voyage, 1768–1771. ©The British Library Board

It was about 1,000 years ago when the Maori first settled in Aotearoa, now known to us as New Zealand. James Cook found his way there in 1769. In the same year, a painting attributed to Tupaia, a Polynesian navigator who was with Cook at the time, depicts a Maori man bartering with an English naval officer. Seven decades later the British colonized the Pacific islands of New Zealand, and today Pakeha (people of European descent) make up about 71 percent of the population of the country. The theme of the Venice Architecture Biennale, “Absorbing Modernity 1914-2014,” takes on complex meanings in the case of New Zealand.

This is the first time New Zealand is participating in the Venice Architecture Biennale. The New Zealand Pavilion’s title, “Last, Loneliest, Loveliest,” is taken from Rudyard Kipling’s poem “The Song of the Cities.” In the poem Kipling devotes a stanza each to Bombay, Calcutta, Hong Kong, Quebec and Montreal, Victoria, Cape Town, Sydney, and other cities. Auckland is last:

Last, loneliest, exquisite, apart—
On us, on us the unswerving season smiles,
Who wonder ‘mid our fern why men depart
To seek the Happy Isles!

The New Zealand Pavilion catalogue declares the title of the pavilion ironic, poking fun at a “romantic perception of New Zealand” and its “(allegedly) clean and green countryside and the spectacular mountains beyond.” Bill McKay, who teaches at the School of Architecture and Planning at the University of Auckland, writes in the catalogue, “Our cities … are where most of us live, and to a large extent, ever since their inception, they have been pale reflections of the places we came from. In one of the last lands to be settled in human history, we are still trying to find the right way to live.”

“By the end of the nineteenth century the process of transforming New Zealand into a little England was largely complete and [architect and planner] Samuel Hurst Seager could look around and pronounce ‘that we have no style, no distinctive forms of (architectural) art … our cities are chiefly made up of architectural quotations,’” writes Justine Clark in “Ephemera: The Elusive Canon of New Zealand Architecture,” which appeared in Fabrications, the Journal of the Society of Architectural Historians, Australia and New Zealand in the December 2004 issue.

But the architects of the 1940s, 50s, and 60s wanted to create an indigenous modern style. “The modern and the local became tightly intertwined, indeed to be a New Zealander was to be modern,” Clark writes.

For David Mitchell, creative director of the pavilion, modernization in New Zealand brought together European and Maori culture, heritage, and eventually architecture. After World War II, young architects who called themselves “The Group” designed houses that borrowed from traditional Maori architecture. In time, other cultures and traditions also influenced New Zealand architecture, as immigrants came from other parts of the world.

Initially, the combination of European and Maori styles of architecture was resisted, because the government pursued a policy of assimilation for the Maori people. This has now changed in New Zealand culture generally, and in government policy. A unique Pacific architecture emerged, and is the central focus of the New Zealand Pavilion.

The catalogue of the New Zealand Pavilion is here, and a video of a lecture by creative director David Mitchell is also online. The 2014 Venice Architecture Biennale runs from June 7 to November 24.