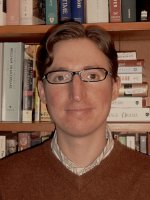 Sam White is an assistant professor of history at Ohio State University. He lives in Columbus, Ohio, and has been a member since 2003.

I’ve written and taught on a number of topics in environmental history, both American and global, including food, animals, and disease in history. My research focus is in combining historical and scientific sources to understand past climate and its role in human history, particularly during the early modern Little Ice Age. My last book, The Climate of Rebellion (Cambridge Univ. Press, 2011), explored the way that recurring freezing winters and drought during the late 16th and 17th centuries created crisis in the Ottoman Empire, transforming demography and land use across the Eastern Mediterranean.

I’ve been interested in history for as long as I can remember. Before I even started college, I meant to become a history professor. In retrospect, that was awfully presumptuous of me, but with a lot of luck and a lot of help I managed to make it happen.

My big project for the moment is the role of climate in the early exploration and settlement of North America. By now I suppose most historians have heard of the Jamestown and Roanoke droughts, but it turns out there is much more to it than that. From a climatic perspective, the first Spanish, French, and English attempts in North America were just appallingly ill-timed. Besides that we have to consider more complex factors, such as how the Little Ice Age affected Native Americans and their reception of the first settlements, or how Europeans at the time even understood what we would now call “climate.” While a real change from my previous research on the Ottoman Empire, I’ve found this a fascinating topic and a lot of fun to work on.

Besides climate and early colonial America, I have a number of side projects, including a website (climatehistorynetwork.com) and a big edited volume on climate history. I’m also planning a project examining Shakespearian theater as a case study in how climate change influences culture. Shakespeare’s career coincided with some of the most abrupt natural climate change of the last few millennia (but still small compared to projected global warming) and some of the worst winters and deepest poverty in English history. At the same time, plays like his were drawing enormous audiences year-round in open-air theaters. It strikes me as a perfect cultural phenomenon to examine how climate influences the ways we live and the ways we see the world. So far, I’m finding that the influence is really there, but it’s never simple or straightforward. What’s often lost in contemporary discussions about global warming is that climate change isn’t just something out there that will cause property damage or incur mitigation costs. Climate is a real factor in how we live—but still only one factor in our complicated lives.

When I first came to graduate school, I hadn’t even heard of environmental history. None of the courses I have ever taught were even on offer when I was an undergraduate.

I would encourage all historians to take a look at Science and Nature (the leading weekly journals of scientific research and reporting) as often as possible. The point is not that we should try to be scientists: we shouldn’t. In fact, the more I work with scientists and scientific research, the more I come to appreciate how much history and the humanities have to offer to the pressing issues of our times, including global warming. However, to make those contributions—and just to find more interesting material for our own research—we need to stay on top of the latest scientific findings. We can’t let ourselves get too intimidated by the equations and technical language.

Apart from that: The Coffee Trader and A Conspiracy of Paper, both mystery novels about the history of finance, by David Liss.

The freedom to pursue important questions.

Once I started the graduate program at Columbia, I realized I needed to think more seriously about history as a profession, not just as an academic subject. I appreciated the way AHA publications helped demystify the job market and the practicalities of actually being a historian.

I used to associate the AHA with the anxiety of job interviews, and with getting lost in the maze of meeting rooms in the Washington Marriott. Since the meeting in New Orleans, though, I mostly associate it with how good the food was there. We really should have it in that city every year…

Vegetarian cooking. When you have a job that produces very slow, very abstract results, it’s nice to have a hobby where you can exercise creativity and make something tangible in an evening—and then eat it.