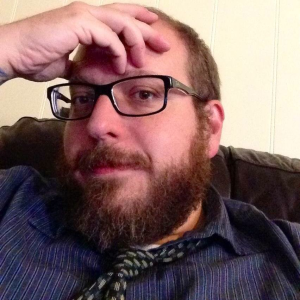 Michael A. Ryan is an associate professor of history at the University of New Mexico. He lives in Albuquerque, New Mexico, and has been a member since 2000.

I work on the social, cultural, and intellectual history of the late medieval and early modern Mediterranean Basin, focusing particularly on Spain and Italy. Some of the subjects my research and teaching encompass are premodern apocalyptic expectations and apprehensions; medieval magic and the occult, with a specialty in astrology and alchemy; the connection between popular and elite culture in the Middle Ages; and medieval gender, sexuality, and medicine.

As a kid, I loved reading all sorts of books, particularly mythology and history, and in high school I took as many history and social science classes as I could. I also really enjoyed my foreign language and literature courses in high school, so I suppose I had already been predisposed to studying the humanities. When I first enrolled in the University of Florida as an undergraduate, I began as a chemistry major, but within my first semester, I switched majors to history. I loved the range of courses I could take and the faculty under whose direction I studied.

I’ve been editing a collection of essays on the premodern apocalypse that will soon be published. My next monograph-length study, an outgrowth of my first book, A Kingdom of Stargazers: Astrology and Authority in the Late Medieval Crown of Aragon (Ithaca: Cornell University Press, 2011), sees me investigating magical-themed fraud and charlatanry in 14th- and 15th-century Venice and its working title is “And You Will See Wonders”: Magic and Charlatans in Late Medieval Venice. I’m also presently working on an article involving the punishment of a charlatan-magician by authorities from the late medieval commune of Bologna.

I’m trained as a historian of medieval and early modern Spain, and the Iberian Peninsula will always be my intellectual home, but I am also delving more into Italian history, as I’m finding significant connections and ruptures regarding magic and the occult between the two societies in the Middle Ages. I also find myself gravitating more to critical theory, which has been indispensable for my investigations on medieval approaches to policing societies and bodies alike.

There are too many to list, but the book that always sticks with me, the one that inspired me to become a medieval historian in the first place, is Carolyn Walker Bynum’s Holy Feast and Holy Fast: The Religious Significance of Food to Medieval Women (Berkeley: University of California Press, 1987). I first encountered that study as an undergraduate and absolutely fell in love with it, as I had never read a book like that. The range of sources that Bynum selected and methodologies she used to analyze them impressed upon me how innovative and important history as a discipline could be. And I still love it. I try and read it once every few years, because it had such an impact upon me, and I always find that it has new things to teach me. As for films, I could recommend many, but the one that I enjoy using in the classroom is the 1987 film Le moine et la sorcière, also known as Sorceress, an adaptation of Stephen of Bourbon’s 13th-century De Supersticione. It centers on the cult of St. Guinefort, the holy greyhound whose medieval cult Jean-Claude Schmitt studied, and the film deals with the intersection of magic, science, faith, and gender in the high Middle Ages. Students enjoy it mightily, as well. Two superb academic blogs I especially enjoy reading are the anonymous The Adventures of Notorious PhD, Girl Scholar (http://girlscholar.blogspot.com/) and David Perry’s How Did We Get into This Mess? The Historical Roots of Contemporary Issues & Other Problems (http://www.thismess.net).

I value how fundamentally crucial historians are for society. All historians, regardless of chronological or geographic or thematic focus, play an instrumental role in chronicling change over time, critically analyzing the past, and sharing their expertise with students, fellow scholars, and, especially, the larger public. I see every day how historians engage with and affect public discussions on a host of matters with their insights. I only wish more people—especially those who broadly discount the importance of the humanities—could see that as well.

As a graduate student, I joined to get a better sense of how the profession operated and to think about how to prepare for—and keep an eye on—the academic job market. I’ve maintained my membership, however, because I’ve found the information in both the American Historical Review and Perspectives often invaluable for both my research and my teaching.

One in particular stands out. Some friends and colleagues, who were also attending the AHA in New Orleans, invited me to meet them at a bar down on Bourbon Street for a drink after I had finished dinner. As I walked down Bourbon Street, thronged with revelers of all sorts, I saw more than a few groups of historians, many of whom were still wearing their conference clothes and badges. Some of them, trapped in the heart of the splendid degeneracy of Bourbon Street, were positively delighted, others utterly horrified. Sometimes I fondly recall their various expressions, smile, and chuckle.

Cinema (all kinds—ranging from John Waters to Alejandro Jodorowsky and so many others in between) and popular culture; preparing Spanish, Italian, and Turkish meals; studying languages; going on road trips and traveling internationally; and, above all, friends, family, and cats.

Training graduate students for careers beyond academia is crucial. For far too long, too many students and scholars have been unable to find academic employment. Serious work needs to be done in helping them, as well as to prevent others from being abandoned and/or cast aside. That’s why I think the AHA’s “Career Diversity and the History PhD” initiative and the AHA’s receiving a grant from the Mellon Foundation (http://blog.historians.org/2014/03/aha-receives-grant-expand-career-tracks-history-phds/) is vital. I’m glad to see my home department here at the University of New Mexico—along with the history departments of UCLA, the University of Chicago, and Columbia University—take part in this program and I am hopeful to see what develops.