In Chinese culture, the peach—its fruit, its pit, and the wood of the tree—is associated with springtime, fertility, and especially long life. Grown in the garden of the goddess Queen Mother of the West in China’s fabled Kunlun Mountains, “peaches of immortality” (xiantao 仙桃) ripen only once every few thousand years, conferring eternal life on all who eat them. The white-bearded God of Longevity is usually pictured holding or emerging from a “fairy fruit” (xianguo 仙果)—a peach. Today sweet longevity buns in the shape and color of peaches are typically served at the birthdays of elderly people to celebrate long life and are presented in temples as ritual offerings during the birthdays of deities. 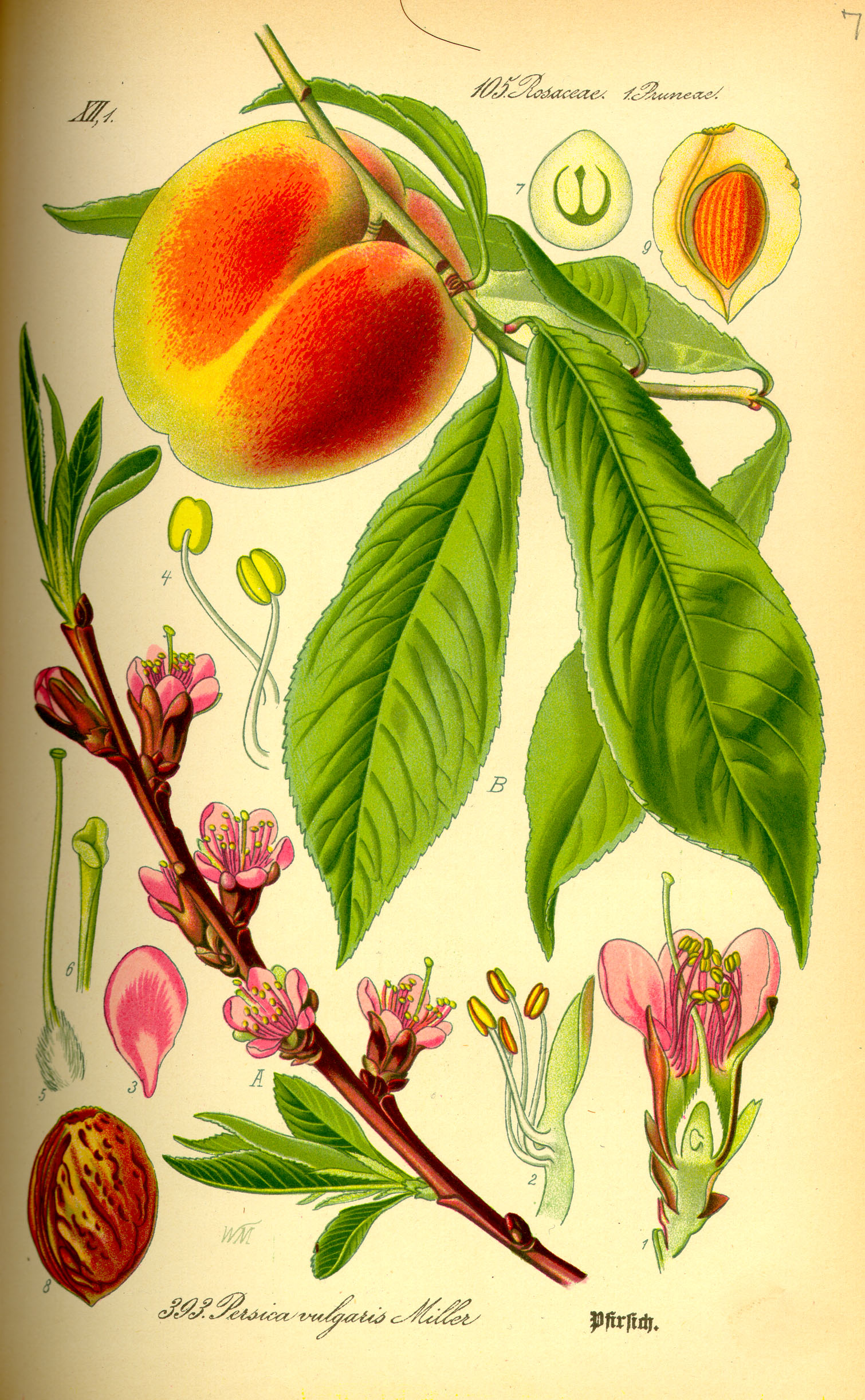 Aside from symbolizing longevity, peaches also safeguard health. The fruit is considered good medicine for everything from rheumatism to coughs to evil spirits. Children wear peach stones carved in the shapes of locks around their necks to scare away disease-causing demons. According to the ancient Daoist philosopher Zhuangzi, peach branches are placed on the doors of houses to keep ghosts from entering, and many people still put peach boughs on their doors during the lunar new year. Because the wood of peach trees has potent supernatural qualities useful in exorcisms, the preferred weapon of Daoist masters for slaying demons has always been a peachwood sword. People in south China wear miniature swords of peachwood as amulets or hang them over the doors of their houses to ward off demons that cause epidemics. Since antiquity, Chinese have used peachwood combs to brush away evil spirits that might enter the body through orifices of the head. Such combs are readily available on the internet, with one advertisement asserting that their combs are “used to put down evil things and to protect the health and safety of families.”

The Romance of the Three Kingdoms (Sanguo Yanyi 三國演義) tells the story of the “Peach Orchard Oath” taken by Liu Bei, Guan Yu, and Zhang Fei, China’s ancient warrior heroes. Part history and part fiction, the tale relates how the three men met in a peach orchard, where they sealed their friendship with an oath of brotherhood. Because of the association of peaches with longevity and permanence, it was no coincidence that the men swore the oath before the gods in a peach grove. The three heroes pledged to aid one another in times of danger and that if anyone violated the oath they would be struck down by heaven. Alluded to as a symbol of fraternal loyalty, the oath later became the prototype for induction into the Triads, a secret society often associated with organized crime.

Peaches and peachwood have always had prominent places in Triad lore and initiation rites. Several of the mythical founders of the Triads have the word peach (tao 桃) in their names, and the purported earliest Triad gatherings often took place in peach gardens or secluded places surrounded by peach trees. In Triad accounts of the society’s origins, a “precious sword” (baojian 寶劍) made of peachwood miraculously appeared to save the five founding Shaolin monks from imminent defeat at the hands of Manchu soldiers. Triad lore also spoke of a peachwood sword engraved with dragons, and borrowing from Daoist practices, at least one early secret society manual conveyed that the sword was to be used ritually to behead demons.

Auspicious and otherworldly, scarcely any other tree or fruit is so deeply instilled with mystic symbolism and miraculous power as the peach. As important elements of Chinese history and culture, peaches and peachwood have always reflected deeply ingrained popular beliefs about magic and the supernatural.

Robert Antony is visiting distinguished professor of history in the Institute of Cultural Heritage at Shandong University.

Tags: Everything Has a History Food & Foodways Asia/Pacific Cultural History