The Case of Struck v. Secretary of Defense

One day in the spring of 1970, while stationed in Phù Cát, Vietnam, air force nurse Susan Struck felt dizzy. She sat down, wondering what the problem was, and then it hit her: she was pregnant. Struck had joined the US Air Force Nurse Corps partly to avoid the traditional path of marriage and family that many of her friends had followed. She loved nursing, had even volunteered for a war zone assignment, and had no plans to trade her career for a family. But when she realized she was pregnant, she had only two options: face immediate discharge for pregnancy and leave the air force or have an abortion and remain on duty. 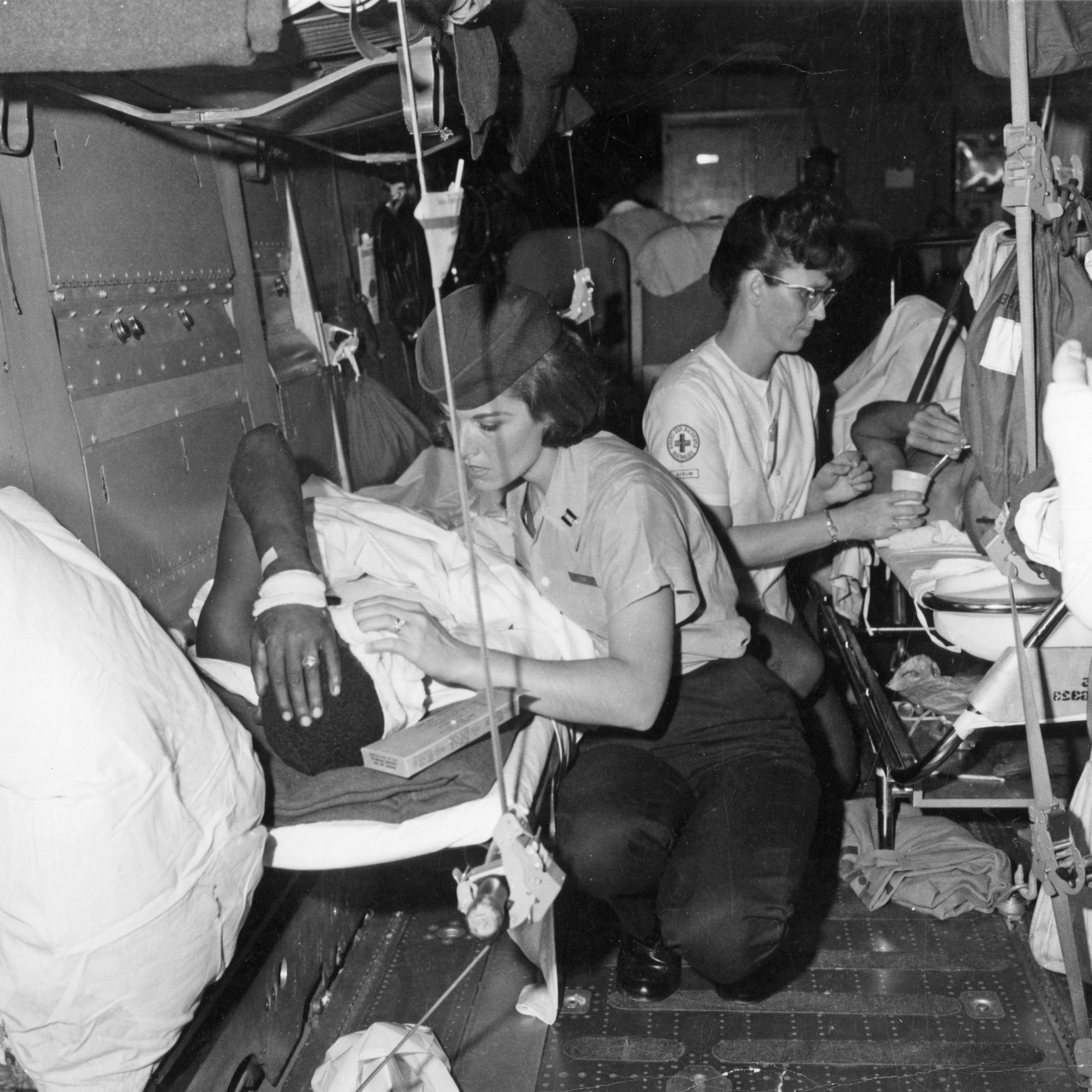 Struck decided to have an abortion. At the time, the US military permitted abortions in its hospitals, though the procedure’s availability in Vietnam varied, and so Struck planned to ask for permission to fly to Japan for the procedure. But after a dream about her fetus, she drew on her Catholic faith and decided to continue with the pregnancy and surrender the baby for adoption. She also resolved not to be discharged, so she hid her pregnancy for as long as she could. She was about seven and a half months along when her hospital’s chief nurse confronted her. The following day, Struck was on an airplane back to the United States, where she began a two-year legal battle to remain in the military.

Since formally admitting women to the armed forces, the US military had imposed regulations that restricted women’s sexuality and pregnancy, driven by both prevailing gender norms and a desire to safeguard the women’s and the institution’s reputations through a public image of heterosexual respectability. But in other ways, policies increasingly reflected a moderate approach to women’s concerns, and by 1970, military abortion policies outpaced much of the rest of the nation’s.

The Department of Defense (DOD) attempted to standardize its reproduction policies in 1966, a year after the US Supreme Court guaranteed married couples the right to reproductive privacy in Griswold v. Connecticut. The DOD ordered that birth control be made available to servicewomen and to the wives and daughters of servicemen worldwide, and it permitted abortion and sterilization “for medical reasons only.” Federal law regulated military medical care, but as states passed widely varying abortion laws in the late 1960s, many medical officers were unsure whether state laws applied. In early 1970, the surgeons general sought clarification from the DOD.

By the standards of the era, the DOD abortion policy was among the nation’s most liberal.

In July 1970, DOD chief medical officer Louis M. Rousselot clarified that abortions could be performed in military facilities “when medically indicated or for reasons involving mental health.” The policy imposed no gestational time restrictions, but it did require the approval of two physicians and specified that no medical staff had to participate against their wishes. When the military’s surgeons general countered that they preferred that state laws dictate abortion policy, Rousselot held his ground. A practicing Catholic, he was no abortion advocate, but he believed that the armed forces needed a uniform policy, and that reproductive decisions were best made by women and their physicians. By the standards of the era, the DOD abortion policy was among the nation’s most liberal, with only four states—New York, Washington, Hawaii, and Alaska—permitting the procedure under less restrictive terms.

Meanwhile, Struck continued to fight her discharge. By October 1970, she had been sent to McChord Air Force Base, where the American Civil Liberties Union (ACLU) sued the Secretary of Defense on her behalf and won a series of temporary stays allowing her to remain in the military while her case was litigated. On December 3, Struck delivered a baby girl, who was soon adopted by friends in Nebraska.

Two weeks later, in an effort to draw Catholic voters to the Republican Party, President Richard M. Nixon and his political adviser Patrick Buchanan initiated a plan to publicly reverse the DOD. The military’s abortion policies had not drawn much public attention, but the pair seized on the issue to frame Nixon as antiabortion. Characterizing abortion as “an unacceptable form of population control” and citing the “sanctity of human life,” in March 1971, Nixon ordered the DOD to follow state, not federal, abortion laws. The move did not go far enough for Rep. Larry Hogan Sr. (R-MD), who proposed the first fetal personhood constitutional amendment in 1973. Servicewomen and dependent women, Hogan understood, could still travel to other locales for the procedure, all at military expense. But Nixon issued no further directives.

Jurisprudence about women’s reproductive lives changed rapidly in the early 1970s, and this legal climate framed Struck’s efforts to remain in the air force. Her case was first heard at the US District Court for the Western District of Washington, where her attorneys argued that a discharge for pregnancy violated Struck’s constitutional rights to equal protection and due process. Her attorneys likened pregnancy to a temporary disability and noted that no other comparable ailment or condition required discharge. Moreover, they insisted that by tethering Struck’s employment to her willingness to have an abortion, the military violated her freedom of religion. The district court disagreed, as did the Ninth Circuit Court of Appeals. Finally, Struck’s attorneys appealed to the US Supreme Court, which agreed in October 1972 to hear her case.

At that point, the ACLU’s Women’s Rights Project joined Struck’s legal team, and future Supreme Court justice Ruth Bader Ginsburg prepared to argue the case before the court. Ginsburg’s argument rested on three points: air force policies violated Struck’s rights to equal protection, privacy, and religious freedom. Struck’s decision to carry her pregnancy to term made her case an ideal one for considering reproductive restrictions. Struck’s choice not to terminate her pregnancy focused the case on the government’s ability to regulate reproduction choices of any kind, not just abortion. Adopting a tactic she used in other cases, Ginsburg showed how sexual discrimination operated on many fronts, not only in the most obvious of ways. Air force policies that restricted a woman’s right to choose birth, Ginsburg argued, constituted sex discrimination as much as policies restricting a woman’s right to abortion.

If Ginsburg had had her way, the court would have considered the legal right to abortion through the prism of Struck, not Roe.

In late 1972, when the Supreme Court agreed to hear Struck, several other abortion cases were winding their way through the legal system, including Abele v. Markle, Doe v. Bolton, and Roe v. Wade. Attorneys enlisted various approaches and arguments, but they all did so in an era of swift change. The 1971 Reed v. Reed ruling increased the level of scrutiny that the courts applied to cases of sexual discrimination, though they stopped short of treating sex as a suspect classification on par with race. Moreover, after Congress passed the Equal Rights Amendment (ERA) in March 1972, many Americans—including military leaders—assumed that all legal distinctions between women and men were doomed, or at least suspect.

Military officials already knew that change was coming. The feminist movement influenced a generation of servicewomen who fought sex-based policies, including pregnancy and parenthood discharges. And, with the ERA seemingly on its way to ratification and with conscription nearing its end, military officials knew that they had to take women’s demands seriously. Convinced that the government would lose its case, the solicitor general persuaded the air force to grant Struck a waiver allowing her to remain on duty. That move rendered her case moot, and the Supreme Court never heard arguments. Military officials used the same tactic in other cases until 1976, when Crawford v. Cushman held that the military could not discharge women for pregnancy.

Today, Struck has been overshadowed by another woman who also discovered that she was pregnant in the spring of 1970: Norma McCorvey, the Jane Roe at the center of the landmark 1973 case. Yet if Ginsburg had had her way, the court would have considered the legal right to abortion through the prism of Struck v. Secretary of Defense, not Roe.

Nonetheless Struck’s experiences and her case remain important for what they reveal about the legal rationale for reproductive rights, as well as about the military’s complex reproductive history and its central role in the broader history of abortion politics. Today, military women’s right to an abortion is much more restricted than it was in Struck’s day. Unless their lives are in danger or their pregnancy resulted from rape or incest, abortion cannot be obtained in military hospitals; servicewomen and the wives and daughters of servicemen must go to a civilian facility instead, at their own expense. Women stationed abroad where abortion is not permitted must return to the United States—again, at their own expense.

The stark realities of the present, however, belie a more complicated history in which servicewomen and the US military stood at the center of national debates about reproduction. In part, Struck v. Secretary of Defense is a military-specific story about the ongoing struggles of an institution governed by federal regulation that is geographically located within individual states and foreign countries, with their own sets of laws. That story also highlights the military’s continuing need to recruit and retain women (as well as men with wives and daughters) alongside its need to assign service members wherever and whenever they are needed.

But Struck’s case also speaks to broader issues facing all women who seek to balance career and reproductive choices within a shifting legal framework limiting their options. It is a story about how cases ostensibly about one issue—here, abortion—are entangled with other threads of meaning and consequence. Perhaps ironically, it was a woman who chose birth, in an institution that prohibited pregnancy but permitted abortion, who most clearly brought questions of women’s equality, reproduction, employment, and religion to the fore in 1970.