The coronavirus pandemic has laid bare the contradictions in American society, especially regarding America’s broken immigration system. Predictably, some politicians and pundits blamed foreigners—Chinese, Mexicans—for bringing the virus into the country, feeding popular nativism and racism. At the same time, the pandemic made clear that immigrants, including the undocumented, are the nation’s “essential workers,” who grow food and process meat, deliver takeout and Amazon orders, drive taxis and clean subways. They work in hospitals as orderlies, technicians, nurses, and doctors. And they do so—often without protective equipment or access to health care—at great personal risk. Immigrants themselves have protested abusive racist scapegoating, contagion within detention centers, disproportionately high rates of infection and death, and exclusion from federal stimulus payments. 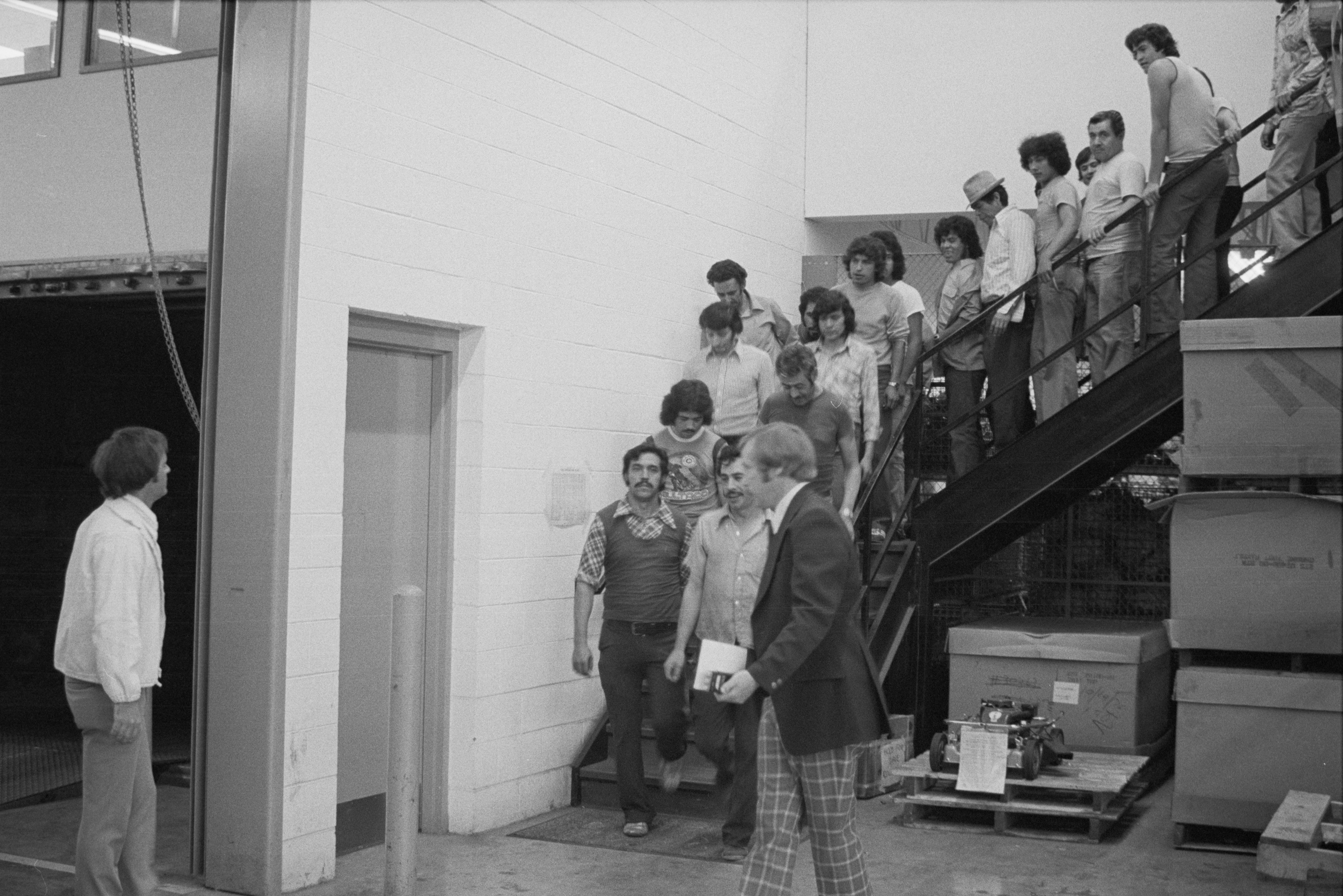 On June 21, 1977, officials in Illinois conducted a workplace immigration enforcement raid. The distinction between “economic” and “political” migrants has always been artificial. Historically, migrants have been impelled by both political and economic conditions. Library of Congress/Marion S. Trikosko, 2017651370

But how the increased visibility of immigrants will influence immigration policy remains to be seen. Political polarization over immigration did not begin with COVID-19, of course; nor did it begin with the election of Donald Trump in 2016. Immigration and refugee policies, shaped by civil rights and human rights frameworks since the 1960s, have long been used as a response to and as part of efforts to control the changing ethno-racial composition of the United States. Nativist politics have waxed and waned throughout American history, with policy implications reaching an apex with comprehensive immigration restriction in 1924. After a half century of reduced attention to the issue, immigration policy has reemerged as a “hot-button” issue since the 1970s.

Much of the controversy since the 1970s has centered on undocumented migration. Refugee policy comprises the second point of contention, especially since the early 2010s, when people fleeing violence in Central America and civil wars in Syria began seeking refuge and asylum in the United States. The two issues are governed by different laws but are closely related. At one level, racist suspicions of Latinx people and Muslims link refugees with “illegal” immigrants. Also, for Central Americans arriving by land via Mexico, asylum requests became wrapped up in the racial politics of the border. The rate of denial in Central American and Mexican asylum cases is so high—70 to 80 percent in FY2018— that many people enter the United States without authorization or remain after losing their cases rather than risk return.

Undocumented migration and asylum will undoubtedly preoccupy immigration debates for the foreseeable future, regardless of the outcome of the 2020 general elections. A look at immigration policy and reform since the mid-20th century provides some historical perspective on the politics of the present.

It is notable that it has been nearly 35 years since Congress passed the last major immigration legislation. The Immigration Reform and Control Act of 1986 (IRCA) legalized nearly three million undocumented people and provided for sanctions against employers of workers without documents and for a buildup of border enforcement. The last bipartisan efforts in the Senate, in 2008 and 2012, used the same model—dubbed “comprehensive immigration reform” after its multi-pronged approach—but were defeated in the House by conservatives categorically opposed to legalization.

Comprehensive immigration reform has never been really “comprehensive.” It is better understood as a negotiation between competing interests. In this model, legalization of those already here was traded for enforcement aimed at preventing “future flows.” In important respects, the bargain crossed ideological lines: some erstwhile conservative business interests favored a more stable (i.e., legal) immigrant workforce, and many moderates and liberals considered border security important. Notwithstanding the militarization of the southern border in the 1990s, undocumented migration continued until the 2008 recession. The rate of unauthorized entry from Mexico then reversed and since 2010 immigration from Mexico has remained at net zero, while migration from Central America across the US–Mexico border has increased.

The Hart-Celler of 1965 established the basic structure of American immigration policy.

Today’s problems have their origin in an earlier immigration and refugee law and cannot be resolved without fundamental change. The Hart-Celler Immigration and Nationality Act of 1965 established the basic structure of American immigration policy. Baked into the law are low numerical limits on high-sending countries, which all but guarantee that there will be ongoing unauthorized migration. Specifically, Hart-Celler sets an annual global ceiling on new admissions for permanent residence (290,000 in 1965; 425,000 today), distributes 80 percent to family members (mostly of US citizens), and limits each country to a maximum of 7 percent of the total (20,000 in 1965; 25,620 today). The country maximum serves as a quota, which for major sending countries—Mexico, China, India, and the Philippines—has created backlogs of upward of 20 years. It is the primary driver of unauthorized migration.

Like IRCA, the Hart-Celler Act was also a response to an earlier law. It was an effort to correct a 1924 law that established the national-origin quota system. Those quotas intentionally discriminated against eastern and southern Europeans and Asians, according to a hierarchy of racial desirability. The 1965 act imposed quotas on countries of the Western Hemisphere where none had previously existed. By creating a global system of restriction with “equal” quotas for all countries, Hart-Celler reflected the ethos of formal equality characteristic of the civil rights era.

Hart-Celler was chiefly a symbolic reform designed to present a nonracist image to the world during the Cold War. Its substance was deeply protectionist, with a low global ceiling aimed at keeping American wages high and family preferences aimed at keeping the population white. The symbolism of equal quotas was, and remains, indifferent to sending countries’ diverse sizes and needs, and to domestic labor market conditions.

The policies that regulate refugee admissions and asylum also originated in the Cold War but rely on a different concept: universal human rights—rights that transcend the prerogatives of nation-states. The 1947 United Nations Universal Declaration of Human Rights, conceived in the aftermath of the Second World War, includes the rights to exit and to be free from persecution and torture. But it has no enforcement mechanism, and the right to exit one’s own country did not come with the right to enter another.

The Geneva Convention on Refugees of 1951 established the international norms governing refugee resettlement. The convention recognized the idea that the international community bears some responsibility to help the citizens of states that fail them. It carved a space of exception in the otherwise highly restrictive immigration laws in the West.

The civil rights and human rights frameworks of immigration and refugee policy were deployed as instruments of Cold War strategy.

But the convention was limited in important ways. First, it defined refugees as individual victims of persecution perpetrated by states against certain groups. It does not cover those fleeing from violence if they cannot prove they were personally imprisoned or tortured, or those displaced by drought and other climate-related disasters. Second, the convention was intended for Europeans fleeing the Soviet bloc. It excluded refugees who left mainland China for Hong Kong after the 1949 Chinese communist revolution because some of the primary resettlement countries (including the United States) still maintained laws excluding or restricting Asians. Still, the United States did not sign the terms of the Geneva Convention until 1968 and did not pass a domestic refugee law incorporating international norms until 1980, under pressure from the human rights movement.

An enduring legacy of this system has been the artificial distinction between “political” and “economic” migrants. The distinction was conceived in the emergency of wartime displacements and restrictive immigration regimes throughout the West. Historically, though, migrants have been impelled by both political and economic conditions: Jews fleeing religious and economic restrictions in tsarist Russia, Chinese displaced by failed harvests and Taiping violence. Today, Central American migrants are fleeing both civil violence and economic precarity.

This brief history suggests that the civil rights and human rights frameworks of mid-20th-century immigration and refugee policy were not timeless principles but expressions of contingent politics and deployed as instruments of Cold War strategy. They are outmoded and incapable of addressing migration and asylum in our own time.

As we ponder whether the coronavirus pandemic will prompt a more fundamental reckoning with our immigration and refugee policies, it is worth recalling another historical pattern. Whatever their limitations, immigration reforms since 1970 grew out of popular demands and mobilization for change. Euro-American ethnic groups, especially second- and third-generation American Jews and Italian Americans, drove the post–World War II movement to repeal the national origin quotas. Latinx and Asian American civil rights activism mobilized for legalization in the 1970s and early 1980s, leading to passage of IRCA in 1986. Both movements drew moral and political inspiration from African American freedom struggles. Amnesty International and a generation of human rights activists may be credited with creating the conditions for passage of the 1980 Refugee Act. Today’s immigrant rights movement, which has its roots and experience in immigrant labor and DREAMer activism, organizes around justice, solidarity, and systemic change—making history in their own time.