Imagining a “Job Market” Beyond Supply and Demand

By Emily Swafford and Dylan Ruediger

A few weeks ago, two leading higher education publications ran pieces reflecting on important trends in PhD education. Inside Higher Ed published a report highlighting new data released by the American Academy of Arts and Sciences’ Humanities Indicators project. The article drew renewed attention to the now familiar discrepancy between the number of PhDs earned in history each year and the number of new faculty positions in the discipline. The conclusion: “the job shortage won’t go away any time soon.” Meanwhile, in the Chronicle of Higher Education, AHA executive director Jim Grossman contemplated what new student orientation for PhDs could look like in five years if departments deepened their commitments to diversifying the career aspirations and options of their students. 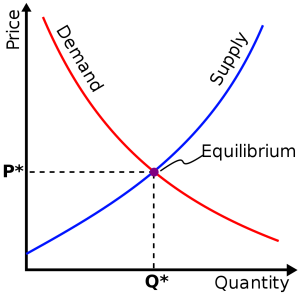 Emily Swafford and Dylan Ruediger argue against using the logic of supply and demand to approach the weak academic job market for history PhDs. CC BY-SA 3.0/SilverStar at English Wikipedia via Wikimedia Commons

Both articles attracted considerable commentary on the current purpose of PhD programs in the humanities. Though varied in tone and substance, many of the responses boiled down to one main point of view: the PhD exists, and should exist, to train future tenure-track professors. And since the PhD has no value in the “real world” beyond the tenure-track market, the “problem” of the “job market” is one of supply and demand with a straightforward solution: when the supply (number of PhDs) exceeds demand (number of tenure-track jobs), supply should be curtailed. Large PhD programs should accept fewer students; others should shut down entirely. Any other proposal is either willfully ignorant (the old ostrich in the sand argument), unbelievably naïve, or self-serving because it allows what one commenter called “bloated graduate programs” to maintain “departmental self-esteem and low-cost teaching” at the expense of their students.

There is no question that the weak market for full-time faculty appointments poses a major challenge to history departments, many of which have seldom questioned the value and purpose of PhD preparation beyond academic career paths. Yet we believe the deterministic logic of supply and demand falls short as a solution to the continuing woes of the academic market.

Proponents of shuttering PhD programs tend to position themselves as advocates for all graduate students, but arguments based on a “supply and demand” model tend to ignore the value of diversity—be it of the institutional or individual variety. Access to higher education remains a major problem in the United States, as does lack of diversity in the “pipeline” to advanced degrees. Perhaps 165 history PhD programs is too many; perhaps not. Each program should evaluate its role in the overall ecosystem and its resources. Simple solutions (“close ’em down”) based on superficial and narrowly construed evidence runs contrary to our standards of argumentation. Ignoring the possible advantages of diverse graduate pathways is inappropriate to a discipline seeking ever increasing diversity, both in topics of study and in practitioners.

So what is the alternative? Start from the idea that higher education and the PhD have value. Start with the idea that doctoral students have agency in their own education and that faculty have agency as stewards of the higher education institutions in which they work. Believe in the power of ideas in the world and in the currency of intellectual work, whether inside, outside, or perhaps adjacent to academia.

This is the foundation of the AHA’s Career Diversity for Historians initiative. It builds from the idea that what can look like a simple question of supply and demand is better approached as an opportunity to reframe the cultural norms of graduate programs. These norms reinforce narrow definitions of success (not to mention value), perpetuating the notion among many faculty, students, universities, and employers that the only acceptable career for a PhD is a tenure-track faculty position. We believe that recipients of the PhD in history and other humanities disciplines have much to offer across a wide spectrum of employment and other venues of civic contribution, because of, not in spite of, the deep intellectual growth and engagement cultivated during doctoral study. We know this is possible because nearly a quarter of history PhDs have built rewarding careers outside traditional professorial positions.

We recognize there are real structural obstacles to creating this future. Among them are public disinvestment in public institutions, the uneven funding of graduate students across programs, and the changing labor structures of higher education. Career Diversity alone will not address these large and complex issues. But we can work toward a future in which historians are better prepared to navigate the changes within the higher education landscape and in which more historians consider careers outside the academy as viable, interesting, and obtainable.

We believe that change is possible because we know faculty are invested in the future of the discipline and in the success of their students. They recognize that the PhD is a substantial investment of time and energy with real opportunity costs, and that graduate students deserve rewarding professional options in exchange. Like the AHA, they don’t believe that graduates should feel forced to choose between a shrinking tenure-track job market and adjuncting. In essence, they recognize the uneasiness of the bargain they have made with their students and they want to fulfill their ethical obligations.

Faculty do not have control over structural change, nor does the AHA. However, we can work to change culture. We can untether the PhD from its traditional vocational focus—as a farm system for the professoriate—and question whether its purpose is to churn out graduates suitable only for a single professional niche.

This is the value of Career Diversity’s emphasis on transforming the culture of graduate programs. Looking forward to PhD orientations of the future, we imagine a world in which neither faculty nor graduate students presume that the purpose of the PhD is to meet one’s fate on the academic job market. Our goal should be to train historians—rigorously, but flexibly—to have the skills and vision to find their own ways.