Who Died of Consumption? Race and Disease in the United States

In summer 2015, a project team of eight students from Virginia Tech, the University of Virginia, and George Mason University collaborated to explore the history of tuberculosis in the United States, using newspaper obituaries and census data. The project, funded by 4Va, a consortium of Virginia research universities,will be explored in two AHA Today blog postings that’ll explain this research experience from the perspective of the students. In July, the National History Center and Woodrow Wilson Center co-sponsored a research forum showcasing the students’ research. More information about the project is available at http://ethomasewing.org/tbhistory/. —Tom Ewing, professor of history, Virginia Tech 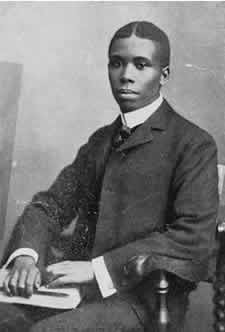 On February 9, 1906, at the age of 33, Paul Laurence Dunbar died at his home in Dayton, Ohio, of consumption (the common name for tuberculosis in this era). Tuberculosis was the single greatest cause of death between 1870 and 1910, claiming three to four million estimated lives in the United States, including Dunbar’s. Although his case was not unique in age, length of illness, or even cause of death, Dunbar’s fame as an African American poet and the reporting on his death are unique in their capacity to illustrate consumption’s effect on society at the turn of the 20th century. Taking advantage of online newspaper archives, we built and analyzed an online dataset of tuberculosis deaths to measure, visualize, and narrate the stories of lives lost to consumption. Using both traditional and nonconventional historical methods of inquiry, our analysis explored the intersection between race and tuberculosis and asked how African Americans, like Dunbar, and other minorities experienced tuberculosis. 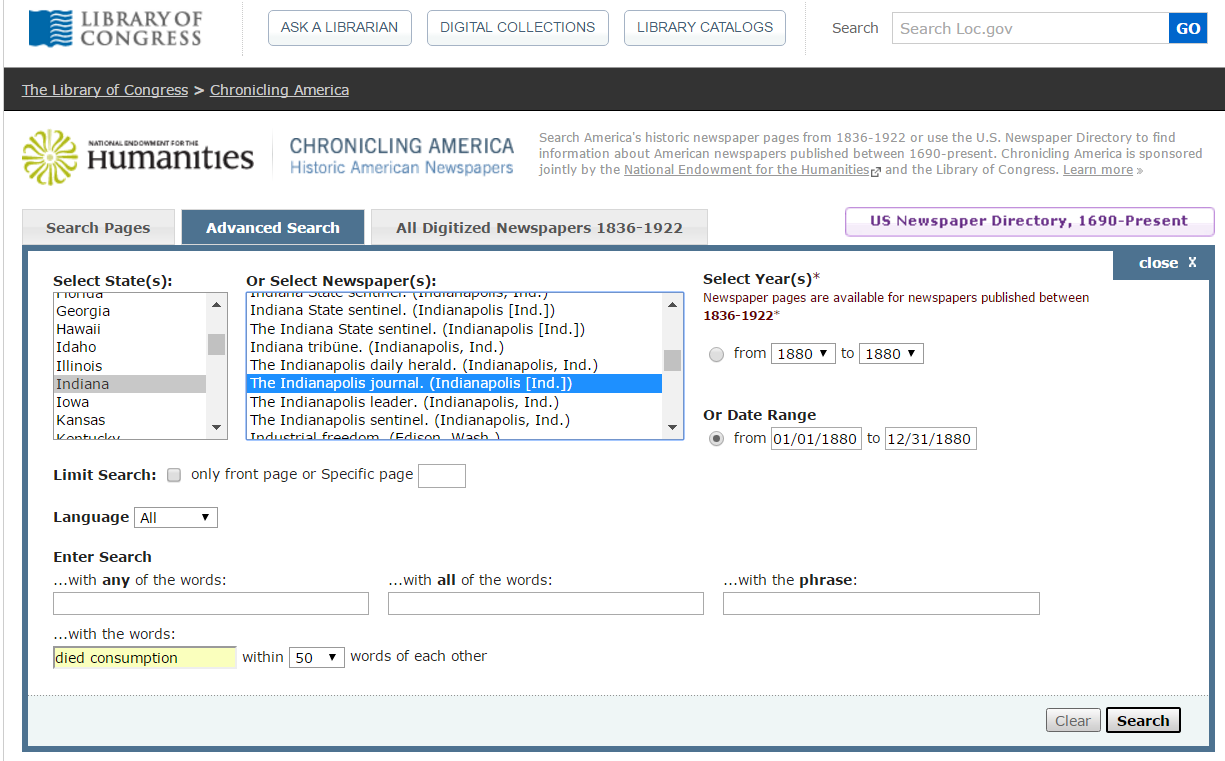 Our methods involved browsing through online archives of newspapers printed between 1870 and 1910 that were accessible through Chronicling America from the Library of Congress and commercial databases available through our university libraries. We narrowed our search to the words “died” and “consumption” within 50 words of one another, which yielded more than 40,000 results from more than 40 newspaper titles across the United States. Our research team entered data about individual victims that included personal information (name, date of birth and death, gender, age, race/ethnicity), geographic data (place of birth, death, and residence), disease/health history (length of illness, description of death), familial connections (parents, spouse, siblings, children), and place in society (occupation, associations, religion).

While gathering large amounts of death data can be a daunting process, what we can do with that data is exciting. We discovered more than 6,000 individual victims identified by newspaper obituaries as having died from consumption. As will be discussed in a subsequent blog by our collaborators, the biggest challenge we faced was using this data to provide meaningful insights into the ways that Americans experienced this disease. 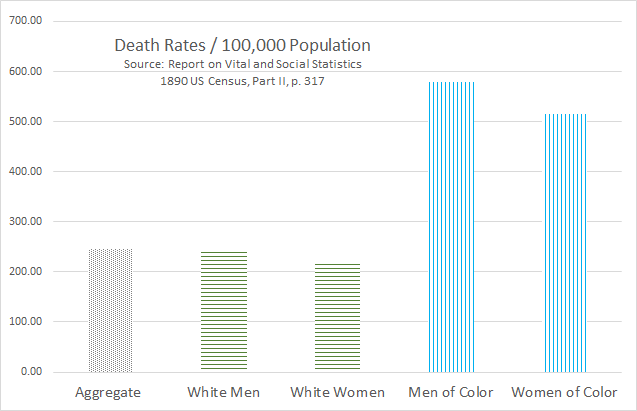 Death rates from consumption, by race and gender

The scope and type of information gathered about victims required additional analysis to uncover and interpret racial and ethnic disparities. Figure 1 represents the 1890 census death records of registered cities across the United States by gender and race. The chart clearly illustrates the higher death rates for people of color, as compared to the white population. However, despite these high death rates, the nonwhite population accounted for only 9.3 percent of the total cases we came across. Such low representation proved a disparity in the racial hierarchy that coincided with the unequal socioeconomic trends of the time period.

Understanding how death rates from consumption varied by race situates Dunbar’s death in a broader historical context. While the white population had the largest reported number of tuberculosis deaths, the disease’s rapaciousness varied for minorities. Because minorities were more likely to be underrepresented in healthcare and news reporting, African American, Asian American, Native American, Latino, and Hispanic groups appeared relatively infrequently in newspaper obituaries. We thus found interpreting race and ethnicity using newspaper sources to be a challenging process. Most newspaper obituaries omitted the racial identities of the victims. If newspapers did describe the victim’s race, it was usually “colored.” These obituaries often expressed a seemingly negative tone, mentioning that the individuals were either convicts or social failures. Although some obituaries celebrated the achievements of black Americans who died due to consumption, like Dunbar, such articles were not as prevalent as those about white Americans’ life accomplishments.

Charles Green’s obituary to the right is typical of African American obituaries. It is short, rather uninformative, and uninspired in its writing. The bare facts are presented to the reader: his name, his race, his sentence term, where he was from, and his cause and location of death. The rest is left to the imagination. 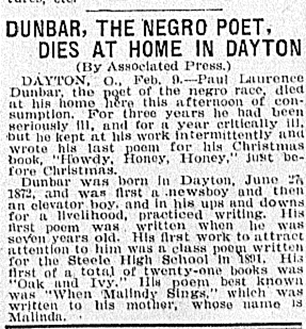 In this context, the obituaries for poet Paul Dunbar offer an interesting basis for comparing the treatment of African American victims. On February 17, 1906, African American newspapers including the Broad Ax in Chicago, The Appeal in Minneapolis-St. Paul, and the Richmond Planet all published laudatory obituaries about this prominent victim of consumption. These obituaries contained similar information about Dunbar’s childhood, his first poems, and his most recent writings. A white newspaper, the Richmond Times-Dispatch on February 10, 1906, published an obituary that continued almost verbatim the same text from an Associated Press wire report as The Appeal newspaper. The only difference, as shown in figures 5 and 6, was the insertion of the phrases, “Negro Poet” and “of the negro race” in the headline and first sentence of the white newspaper. Even in these reports on prominent victims of consumption, the color line was affirmed and upheld. 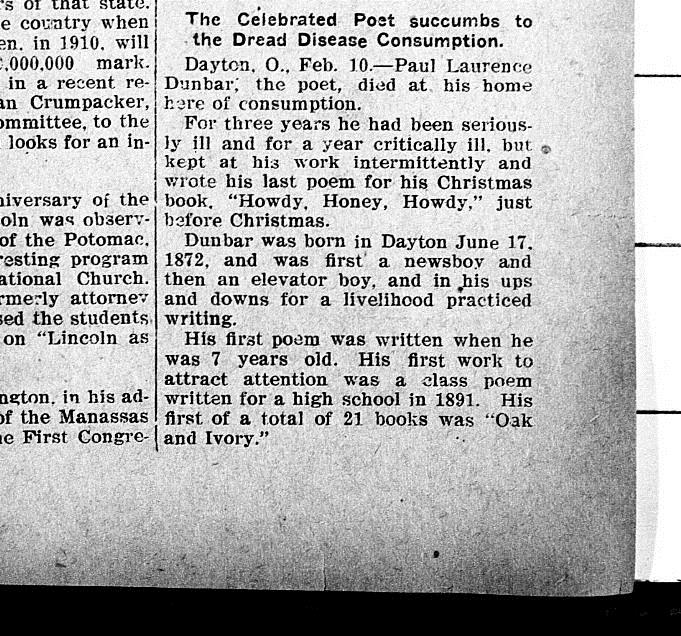 Since continuously reading obituaries is not the most cheerful task, our research team frequently sought diversions to overcome being discouraged. The ridiculousness of cures, advertisements, and theories for the causes of consumption, from cows to vegetarianism, provided amusing distractions as we read through the newspaper search results. Despite our different educational backgrounds and research interests, we were able to combine our strengths to capture a picture of disease and its impact on society during a crucial time in American history.

Whether history majors or not, we took on this morbid duty to faithfully tell the stories of segments of the population who often had their voices silenced. Paul Dunbar’s last poem, “Howdy, Honey, Howdy,” exuded his pride in his African American heritage:

Just as Dunbar’s poem expressed the moment of transition at the end of a life, we discovered that these obituaries revealed new perspectives on lives lost to consumption.

Rachel Snyder is a recent graduate of Virginia Tech with a BA in history and a BS in applied economic management. 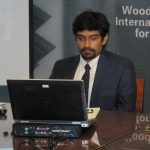 Jay Pandya is a senior mathematics major with a pre-med focus at Virginia Tech. 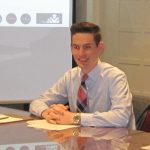 Scott Saunders is a rising senior at George Mason University, with a major in history and a minor in legal studies. 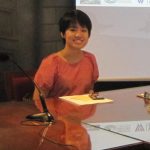 Sarah Tran is a rising fourth year student at the University of Virginia, with majors in history and biology.