Democracy, Now (and Then): Announcing the September Issue of Perspectives

Like the scent of fresh school supplies, Perspectives on History is back for fall. We’re proud to present our big September issue, featuring a special section, Perspectives on Democracy. Because the topic is far from specific to the United States, and certainly transcends our current presidential campaign, we gathered six historians to tackle it from points of view the world over. Our specialists include AHA past president Barbara Weinstein (Brazil), Peter Zarrow (China), Emily Lord Fransee (Senegal), Charlotte Lydia Riley (United Kingdom), Ramnarayan Rawat (India), and Johann N. Neem (United States). The current AHA president, Patrick Manning, also weighs in with some reflections. 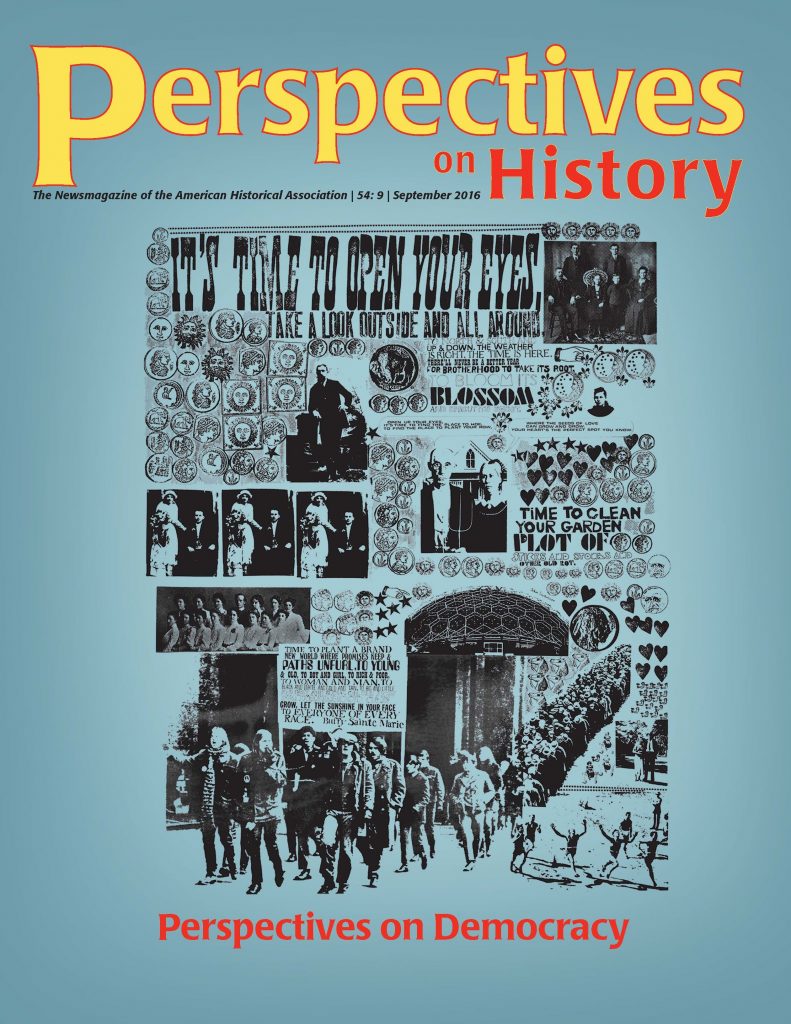 September issue of Perspectives on History

For an ideology that’s often out of step with how people experience it, democracy is worth fighting for—and too important to the way humans relate to one another to give up on. Yet it’s also idiosyncratic, sprouting adjustments as times change, in accordance with local, national, and regional demands. We asked our authors to address problems and possibilities of democracy in their regional specialties within historical perspective. Equality, suffrage, citizenship, the identity of “the people,” majoritarianism, dissent, and race, class, and gender—all of these and more were on the table.

I’ll be the first to admit that AHA executive director James Grossman and I ended up framing the special section in terms of the US presidential campaign, which we’d initially thought would promote a US-centered view of democracy. But this past summer, controversy erupted over whether historians ought to weigh in on the election. As the controversy played out, it became clear that all historians care very deeply about democracy, though we differ in our definitions of it and how we believe it ought to look. Without a belief in democracy, I think, we couldn’t teach, write, or assume roles in public culture. We should never minimize the efforts we make to preserve it, improve it, and pass it on. My hope is that this special section inspires historians to ponder what it means to live in a democracy, from national polities to the smallest campus.

I must also highlight the contribution of esteemed historian of the American West Patty Limerick, who lays out a compelling case for the centrality of Denver in the struggle to create a just society in the United States. The site of our 2017 annual meeting, Denver is a “habitat for historians,” in Limerick’s words. The Mile High City calls out for “applied history”—a method for engaging public issues by situating them in time. From suburban segregation to extractive industries, matters that concern Denverites carry implications for all of us. In her inimitable style, Limerick builds our excitement for the annual meeting in Denver.

Our News section includes the AHA’s own Sadie Bergen investigating strategies for making Wikipedia more inclusive of the histories of women and people of color. You’ve heard of edit-a-thons sponsored by universities, libraries, and community institutions. But you likely don’t know how the internal standards and information architecture of Wikipedia present problems for these efforts.

September is also the jumping-off point for a new AHA Teaching Division effort to determine what accounts for the decline of student enrollments in history courses and what departments can do to halt or reverse the trend. Perspectives readers will recall articles on the decline of history majors, but it’s become clear that overall enrollments are a problem at many institutions, particularly four-year public universities. The AHA’s Julia Brookins introduces data we collected over the summer in an online survey of department chairs. As expected, the data isn’t buoyant, but it does point to possibilities chairs and faculty members could heed. (The AHA will reopen the survey soon to collect more data.)

There’s a great deal more in the issue, including everything you need to know about the annual meeting (preregistration opens September 14!), a wrap-up report on the AHA’s accomplishments with our Bridging Cultures initiative at community colleges, a K–12 curriculum development expert on her post-PhD career path, and the myths and facts about the AHA’s Career Diversity initiative.

From the AHA townhouse to your house—best for fall from the staff of Perspectives!